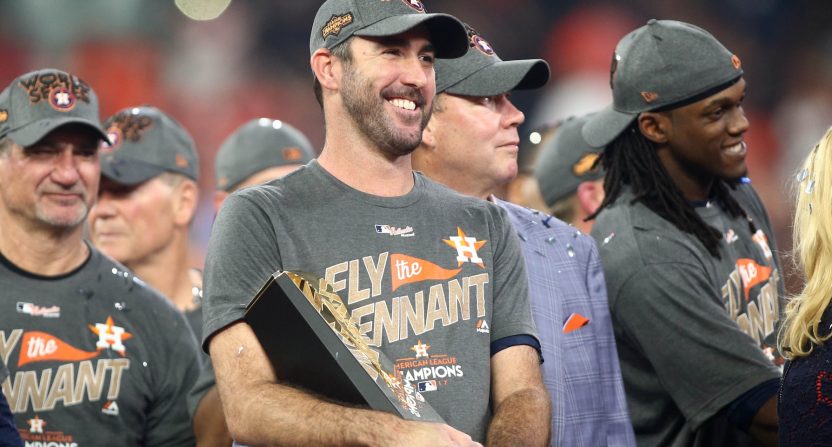 Late on Wednesday night, a report began to make the rounds claiming that a bunch of MLB rule tweaks would be coming over the next two seasons. One of the rules that would take effect in 2019 would be the elimination of the August waiver trade period, implementing a hard July 31st deadline. The news was officially announced on Thursday, meaning we’re not going to have to deal with the ridiculous notion of *two* trade deadlines anymore.

But while the concept of the August 31st waiver deadline was ridiculous, plenty of significant trades have happened in August recently, helping shape playoff contenders and World Series champions. Here are five of the most significant.

August 31, 2017: Astros acquire Justin Verlander from Tigers
We might as well start with a deal that directly led to a World Championship. The Astros and Tigers managed to agree to a deal sending Verlander to Houston at the final hour of the final day of the August trade period, and Verlander responded with a 1.06 ERA in five starts for the Astros down the stretch. In six playoff appearances (five starts), Verlander pitched to a 2.21 ERA over 36 2/3 innings, striking out 38, walking eight, and going 4-1 for the Astros. He was named the ALCS MVP after a pair of dominant starts against the Yankees, and ended up helping the Astros to a seven game World Series triumph over the Dodgers – despite taking the loss in Game 6 (through no fault of his own).

August 30, 2015: Mets acquire Addison Reed from Diamondbacks
Addison Reed isn’t exactly a punchline, but his career still feels like some kind of disappointment after the way he buzzsawed through the minors in 2011. When he came to the Mets in August of 2015, he was expected just to fill a hole in the bullpen, but Reed did so much more, allowing two runs over 15 1/3 regular season innings (that’s a 1.17 ERA), striking out 17 and walking five along the way. The Mets won the NL East title, edged the Dodgers in the NLDS, swept the Cubs in the NLCS, and lost in crushing fashion to the Royals in the World Series. Reed pitched in all five (!!!) of the team’s World Series games, and was tagged with five runs and the loss in Game 5, his third game in a row.

August 27, 2013: Pirates acquire John Buck and Marlon Byrd from Mets
“Holy shit, the Pirates are going for it!” Pittsburgh hadn’t finished above .500 or made the playoffs since the 1992 season, and 2013 looked like their best shot, with the team locked in a tight battle for the NL Central title with the Cardinals. Buck didn’t contribute a significant amount for the Pirates in the stretch drive, hitting a symmetrical .333/.333/.333 in nine games, but Byrd did. Taking over as the every day right fielder for the Pirates, Byrd hit .318/.357/.486 with three homers. Pittsburgh finished 94-68 and won the NL’s top Wild Card spot, with Byrd homering off Johnny Cueto in the Wild Card playoff game and hitting .333/.368/.444 in their five game NLDS loss to the Cardinals.

August 25th, 2012: The Red Sox/Dodgers salary dump
This is one of the most absurd trades in baseball history. The Red Sox traded Josh Beckett, Carl Crawford, Adrian Gonzalez, Nick Punto, and a pile of cash to the Dodgers for a couple of players to be named later (the immortal Rubby De La Rosa and Jerry Sands), Ivan De Jesus, James Loney, and Allen Webster. None of the players aside from Gonzalez, LA’s starting first baseman for the next four-plus years, had a significant impact for their new teams, though Beckett did throw a no-hitter with the Dodgers. But the trade allowed the Red Sox to clear hundreds of millions of dollars owed to Beckett, Crawford, and Gonzalez from their payroll, which enabled them retool around the margins for 2013 (adding guys like Ryan Dempster, Stephen Drew, Jonny Gomes, Brock Holt, Mike Napoli, Koji Uehara, and Shane Victorino) and win an improbable World Championship 14 months after this trade. A year later, they finished 20 games under .500.

August 29th, 2009: Angels acquire Scott Kazmir from Rays
Just a year after winning the AL pennant, the Rays moved on from Scott Kazmir, sending him to the Angels for three players. Kazmir had a strong six starts for the Angels in 2009 after the deal, pitching to a 1.73 ERA and helping the team win 97 games and an AL West crown. Then….the wheels fell off. Kazmir allowed five runs in six innings to the Red Sox in the ALDS, but a late rally gave them the win in the game and the series. In his one ALCS start against the Yankees, he allowed four runs in four innings, with the Los Angeles Angels of Anaheim in Orange County losing 10-1, eventually dropping the series in six games. The next year, Kazmir fell apart, making 28 starts with a 5.94 ERA and 79 walks in 150 innings. He made just one start in 2011, and was released that July.

Meanwhile, the three players acquired by the Rays? One was Matthew Sweeney, who never made the majors. One was reliever Alex Torres, who had a 1.91 ERA in 66 innings for Tampa Bay and was traded to the Padres in early 2014 for several players, including Matt Andriese, Brad Boxberger, and Logan Forsythe. The third player involved in the deal was Sean Rodriguez, who played five years with the Rays as a super utility player and hit .228/.300/.378 before being traded to the Pirates in late 2014. The Rays got way more value out of the trade than the Angels (and still are, because the three players they traded for Torres have all moved on in exchange for younger players still in the Rays organization), but it’s still a deal the Angels probably do every day of the week – they outpaced the Rangers to win the division in 2009 after acquiring Kazmir, and may have been able to overtake them in either or both of 2010 and 2011 had Kazmir been healthy and/or effective.