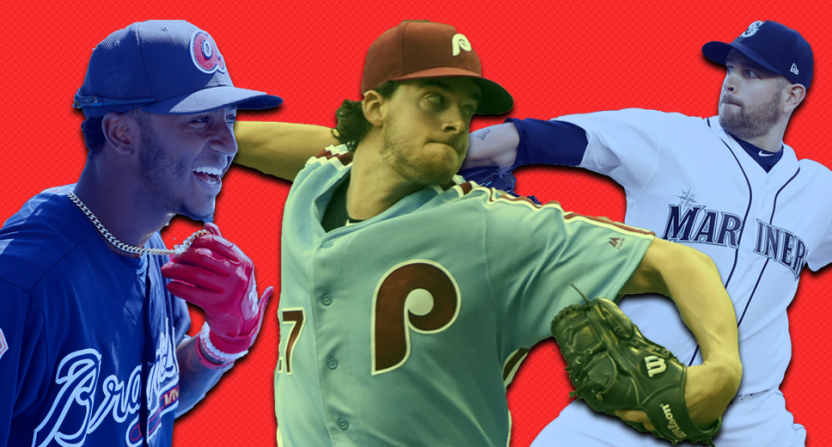 Two and a half months into baseball season, there has been some separation among baseball’s best teams (the Yankees, Red Sox and Astros look unstoppable), but there has also been some clustering. As of Monday morning, 12 teams have between a 6 percent chance and 60 percent chance of making the playoffs, per FanGraphs. In other words, a lot must still be decided.

Inevitably some of those contending teams will fade away while others will surge. The trick is figuring out which will do what.

We asked a panel of our writers to separate the contenders from the pretenders — to choose which surprising teams are for real and might stick around the playoff hunt through the end of the season and which are due to fall back. Let’s go team-by-team.

I’m not sure they’re even an 85-win true talent team and are heavily overachieving, but that may not matter anymore. With the position they’ve put themselves in, they don’t have to play much better than .500 ball to be a 90+ win team. They probably don’t win the AL West, but they should be viewed as the favorites for the second Wild Card slot.

I want to say no, because the back-end of that rotation really worries me, but they’ve banked enough wins and have a good enough team that I think they are for real.

I have zero faith in the Mariners to maintain their current 100-win pace (especially given they’re currently outperforming their pythagorean and BaseRuns expectancies by six wins), but it would take a giant collapse for them to fall short of the mid-80s win total that would put them squarely in the wild-card race.

They’ve had one of the best position players groups in baseball, led by Freddie Freeman and young stars like Ozzie Albies and Ronald Acuna. Their starting pitching is a big question mark, but they’re going to score runs and should remain in the wild-card picture into September.

Personal biases aside, no one player is carrying this team, and they have a strong lineup and an above average rotation. I am kinda worried about the middle relief, though.

The Braves have been impressive, but there’s a whole lot of room for regression. Ozzie Albies has already cooled down, and Sean Newcomb and Mike Foltynewicz will be next. They’ll be a force in 2019, though.

This starting rotation — Aaron Nola, Jake Arrieta, Nick Pivetta, Vince Velasquez, and Zach Eflin — has been one of the top units in the majors and will keep them in games.

Joe Lucia: Not for real

I’m leaning no here. The offense doesn’t have one standout performer, and the bullpen is a bit fringy outside of the incredible Seranthony Dominguez. They do have enough ammo to make life difficult for the contenders down the stretch, though.

I struggled with this one, but ultimately a team with only a +12 run differential that relies on a whole lot of young players don’t fill me with confidence. I’m expecting a fade.

Basically everything I said about the Mariners. Probably a true talent team of 82-85 wins, but they’ve banked so many wins that they can hang in the NL Central race and be a Wild Card favorite by simply playing decently the rest of the way.

The offense is fantastic, the bullpen can hold its water (mainly thanks to Josh Hader), but the rotation isn’t all that hot. That being said… I don’t think they’re going away.

The Brewers have the best record in the National League, with a fairly sturdy run differential to go along with it. I doubt they’ll truly challenge the Cubs in the NL Central, but they’re the easy favorite for a wild-card spot.

While the records don’t reflect it to this point, I think the Cardinals are actually a better baseball team than the Brewers. I also think they’ll be active at the trade deadline, with Manny Machado and Josh Donaldson being potential targets.

This is the Cardinals we’re talking about, and shit always goes their way. The bullpen remains a concern, and if the book comes back on Miles Mikolas and he struggles in the second half, it could be a short path to contention for them.

The Cardinals entered the season as a wild-card favorite, and not much has changed. They’re currently on a 90-win pace behind a collection of good-by-not-great veterans. Just as has become the norm for them.

They have a lot of injuries and blew an excellent chance to put away the Dodgers. But, this division is so bad, and the Dodgers have so many key injuries themselves. I think the Diamondbacks are a low to mid-80s win team at the moment, but that should still keep them in the race.

The NL West sucks. Paul Goldschmidt is getting hot. Zack Greinke still exists. The Diamondbacks aren’t falling out of the race any time soon.

The Diamondbacks benefit from the utter crappiness of their division. Not only do they merely have to beat the Dodgers, Rockies, Giants and Padres to secure a division-series berth, but their record figures to be a few games better than it should be by virtue of playing against these teams.

Matt Clapp: Not for real

Maybe they hang around because the division is so bad, but this team reeks of being a fraud. They’ve far outperformed what their record should be according to the Pythagorean and BaseRuns estimations. Their offense has somehow been arguably the worst in baseball according to advanced stats like wRC+, despite having Nolan Arenado and Charlie Blackmon. And their rotation is full of question marks after Jon Gray. I’m not buying them, but again, I guess they shouldn’t be totally discounted just because that division is asking to be won.

Joe Lucia: Not for real

This is a weird one, because I think the Rockies have a ceiling as high of any team in the National League… but the players on the squad outside of the top five or six players are awful. The team has as many pitchers worth positive value at the plate (three) than they do players worth negative value at the plate with at least 100 plate appearances. That is… depressing.

For a minute there, the Rockies were in first place and contender-or-pretender looked like a genuine question. Now they have lost four in a row, stand under .500, have a -42 run differential and have generally been exposed as a wannabe.