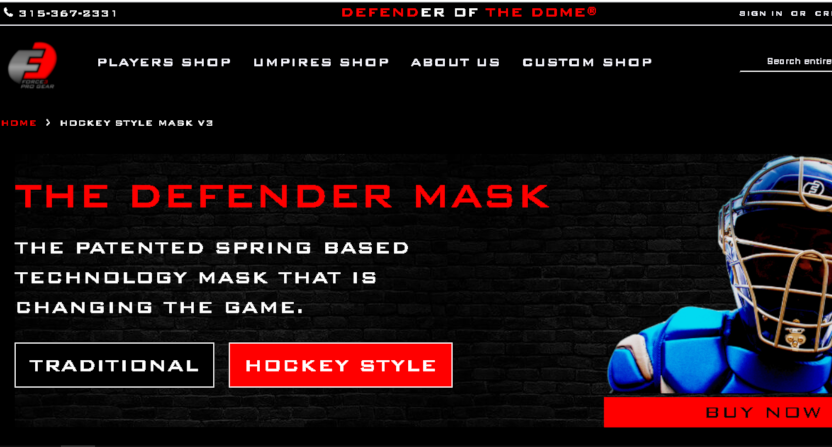 It’s been quite the last few years for equipment company FORCE3 Pro Gear. In 2016, Atlanta Braves’ catcher Tyler Flowers became the first player to wear a FORCE3 mask in a MLB game. Adoption of their catcher’s mask has grown significantly since then, and July saw them named the official catchers’ mask of MLB Players, Inc. (the MLBPA’s business arm); they’re also planning to branch out further into other sports. Recently, FORCE3 founder Jason Klein and CEO Steven Goldsmith spoke to The Comeback via e-mail about how things have changed for them recently, with Klein saying the company grew out of his desire for a better mask while he was umpiring in the minor leagues.

“I started making equipment for umpires to improve the products that were out there,” Klein said. “Umpires are a very small market, and with that comes a small assortment of products. I started making the products that I thought should be better and I knew umpires would appreciate having the highest quality products. Creating this mask for umpires and catchers was really not on my radar, until it hit me… literally. I’ll never forget that one night I was umpiring in Triple-A and got hit in the mask by a foul ball in a spot that I’ve never been hit before. I don’t remember how fast the foul ball hit my mask because all I remember was feeling my mouth to make sure I had all my teeth and asking the catcher if I was bleeding.”

“Once the dust settled, I knew there had to be a better solution to a piece of equipment that hadn’t changed in what seemed forever. The mask I was wearing was the same type of mask I had used while umpiring my very first game when I was 14. I knew that this project would take a very long time and needed my undivided attention. I didn’t start working on the mask until I got out of the game where I could devote all my time and resources to creating a more protective mask. It ended up taking more than five years to develop.”

Klein said their mask is different from other products out there because of the impact-absorbing design.

“[It’s] our (S3) Shock Suspension System technology. While it might look traditional to the naked eye, our mask is anything but traditional. For the first time ever, our mask was actually made up of two masks separated by spring assemblies. This design allows us to absorb more of the impact because the top cage is separated from the bottom cage by the spring assemblies. The energy that usually travels right to the head and causes injury, now gets absorbed in the springs and allows the participant to continue playing or umpiring. We pride ourselves on safety, and our safety record. But what also stands out, doesn’t stand out…the lack of head injuries.”

And Goldsmith said their business strategy is also different, focusing specifically on player safety. They sell two types of masks (traditional and hockey-style, starting at $199.95 and $239.95 respectively), but they only make top-line masks rather than offering cheaper ones that might be less safe.

“At FORCE3, we focus on safety,” Goldsmith said. “We are aware that other companies make masks, but starting with our founder, who was a professional umpire and experienced the game firsthand, we design and produce our products for safety first. Other companies have a good, better, best strategies behind their equipment they produce. Since we believe that there is no compromise when it comes to safety, we only have a best and safest strategy. Our patented system is what sets us apart.”

Klein said a key moment for them was getting Flowers on board in 2016. He said it wasn’t initially easy to convince Flowers to try this new product, but Flowers wound up being a key endorser of the mask.

“Granted, it shouldn’t be easy,” Klein said. “I was asking them to let me protect their head with a product and a logo that they’ve never seen before. It took finding the right player, with the right agent to understand how important this product and opportunity was. It actually took visiting Tyler in three different cities throughout the year. Without a doubt, Tyler Flowers and his agent Tom O’Connell were the perfect team for this mask. Besides the chance and opportunity that this could be a game changer in baseball, remember, he was also a professional catcher who had been hit once or twice before.”

Klein said their mask stood out as a significant departure from previous mask designs, and it wound up working very well for Flowers.

“Since there had been really no change in the design for an incredibly long period of time, I don’t think he had much to lose for trying. What really solidified it was when he was wearing the mask and took a fastball off of it. He didn’t realize how violent it was until he watched the replay. What he thought was a glancing blow at the time, was actually very violent. From that impact, Tyler was not only on board, but a staunch advocate telling every catcher who would listen.”

Goldsmith said Flowers’ adoption of the mask, and his endorsement of it, has led to significant adoption from other players.

“Almost half of the catchers in MLB now wear FORCE3 masks, even though only one (Yasmani Grandal) is an investor in the company. All of the other catchers are wearing FORCE3 by their own decisions regardless of their affiliations with other sports equipment companies.”

Goldsmith said that’s prompted FORCE3 to further expand their production of equipment for players, and the partnership with MLBPI will let them expand even further.

“The company has accelerated our expansion into producing the safest products. We might have started off with safe equipment for umpires but that has quickly evolved into the safest equipment for players. The partnership with MLBPA/MLBPI is an important step for the company. The number one job of the MLBPA/MLBPI is to protect their membership. They have been terrific partners and we are aligned in the desire to keep the players safe.”

And Goldsmith said they’re now looking at expansion into other sports.

“We believe that our mission is clear: to not only prevent injuries in sports, but in life. We will be utilizing our patented systems into more and more applications. Any sport that needs protective equipment, we intend to produce the safest equipment. Any vocation that needs protection, starting with the head, but not ending there, we intend to produce the safest products.”