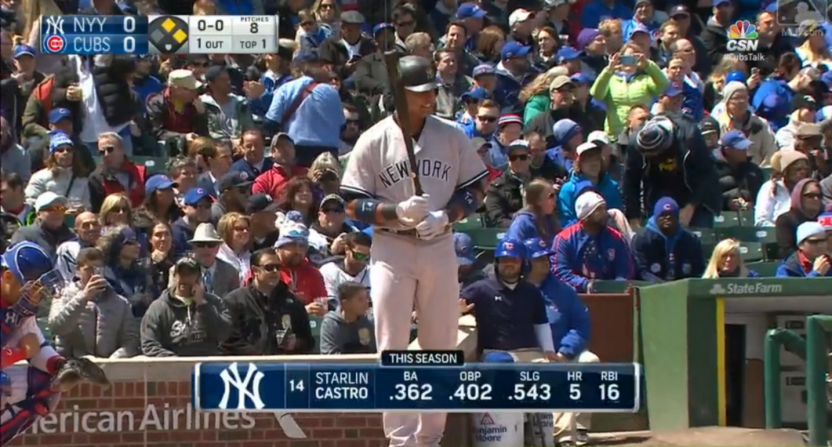 He watched Brett Gardner, Aaron Hicks and Gary Sanchez take at-bats. He stepped to the on-deck circle and took a few practice swings. He looked down at his jersey and saw pinstripes.

Batting cleanup, Starlin Castro walked to the plate and heard a crescendo of cheers. Embraced by a warm standing ovation at Wrigley Field, Castro grinned and tipped his helmet.

Wrigley Field and the @Cubs welcomed Starlin Castro back properly in his first at-bat. #CubsTalk pic.twitter.com/3GRglL6tri

Castro put in five years of work with the Chicago Cubs that no fan of Wrigley’s is sure to forget. He slashed .281/.321/.404 in 891 games with the club. He posted six RBI in his debut. He was a three-time All-Star while donning the Cubs’ No. 13. He helped Chicago reach its first postseason since 2009.

And a year before the Cubs won a Championship, he was traded away to the New York Yankees.

Lots of pregame interest in Starlin Castro, making his return to Chicago pic.twitter.com/8Vnmtimvzs

Is the second baseman feeling a little bittersweet about his return to Wrigley?

“I’m happy to go back and play there … I don’t know. Actually, I don’t know. We’ll see. That’s why I can’t wait to see them react,” Castro said, according to ESPN.com.

The Cubs reacted honorably. Chicago played Castro’s all-too-familiar walk-up song when he was with the franchise. “Ando En La Versace” by Omega blared through the sound system as the crowd clapped along. In between innings, Chicago played a video montage of Castro’s fruitful years with the Cubs.

In his first at-bat and with two runners on, Castro swung a sharp line drive into right field. Three-time Gold Glove winner Jason Heyward made a basket catch as Castro trotted back to the dugout amidst a mixture of cheers and applause for the second baseman.

Castro and Anthony Rizzo played together for three of his five years on the team. Rizzo joined Chicago in 2012, busting out of his swan song season batting .285 with 15 home runs.

Anthony Rizzo knows how important Castro was to the franchise as both a teammate and friend in the clubhouse.

“[Castro] deserves it,” Rizzo said, per ESPN.com. “It’ll be nice for him. Part of him was part of that team last year that won a World Series. I’m sure he felt that. Just like every other Cub that’s put on this uniform, that championship is for them.”

The 27-year-old’s tenacity and desire to win did not go unnoticed by Cubs manager Joe Maddon. Castro and Maddon worked together for one year — Maddon took the Cubs over in 2015 after leaving his post in Tampa. The 2015 Cubs finished third in the National League Central with a .599 winning percentage before being defeated by the Mets in the NLCS. Maddon said Castro played a large role that year and beyond.

“He was never an excuse-maker,” Maddon said, according to ESPN.com. “Whenever anything went poorly, he stood tall, I thought. You have to like everything about him.”