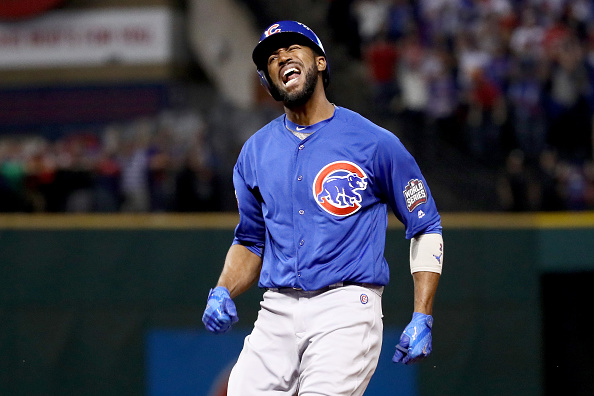 Last offseason, Dexter Fowler didn’t get the offers he was looking for on the free-agent market, and settled for a one-year, $8 million deal — with a $5 million team buyout for 2017 — to re-sign with the Chicago Cubs. It was a very surprising move — even to his own Cubs teammates — as reports had Fowler landing with the Baltimore Orioles for three years and $35 million. Fowler chose happiness and familiarity with the Cubs, going back to a team that he knew was a favorite to win the World Series, and giving himself another shot to show he deserves a big contract on the open market.

Mission accomplished. Fowler had the best season of his career and helped lead the Cubs to a World Series ring, and now it appears he got the lucrative long-term deal he’s been wanting.

Fowler has agreed to a deal with the St. Louis Cardinals according to several reports, and it sounds like he’ll have an introductory press conference in St. Louis on Friday (pending a physical):

Dexter Fowler has a deal with #STLCards. Expected to be big.

That should have said, rumor is 80/90M. Unconfirmed for fowler/cards. Cusamano, @BNightengale had story

Fowler, 30, gives the Cardinals the center fielder they’ve been searching hard for this offseason, and you can pencil him into the leadoff spot where he’s been tremendous for the Cubs over the last two seasons. The Cubs always said “You go, we go” with Fowler, as he served as the catalyst to their offense with his ability to get on base at an outstanding clip (.393 on-base percentage in 2016). He also led off (the amazing) Game 7 of the 2016 World Series with a home run, of course:

The veteran switch-hitter had a slash line of .276./.393/.447 in 2016, with 13 homers, 13 stolen bases, and a 14.3 walk %. Fowler was valued at a career-best 4.7 wins above replacement (WAR) per FanGraphs, grading out well with his baserunning and defense in addition to the terrific offensive production he put together.

We of course won’t know the answer to that anytime soon, but Fowler’s generally been considered an average defensive center fielder over his career, and he turns 31 in March, so you of course fear that his range will begin declining soon (perhaps severely decline). I would be approaching a contract with Fowler as though he’s only a center fielder for two to three more seasons, and if he’s a corner outfielder, his bat won’t carry as much value. But, his bat still does figure to keep carrying at least solid value for a while with a game that starts with his tremendous plate approach and drawing walks. If he keeps hitting double-digit homers and keeps drawing a ton of walks, that’s going to mean solid production, even if he’s not as much of a threat on the basepaths.

For 2017, Fowler gives the Cardinals their center fielder and another big bat, and the fact they’re essentially taking Fowler away from the Cubs isn’t something that should be ignored either. He figures to add a few wins to St. Louis while also being a win or two better than Albert Almora and Jon Jay figure to combine to be worth in Chicago. Now, the Cardinals are likely going to need a few more players of Dexter Fowler’s caliber if they wish to approach the Cubs in the NL Central standings, but the Wild Card offers an alternative route to the playoffs, and the Cardinals finished just one game out of that race in 2016.

So, it’s a steep price to pay for St. Louis, but it’s a price they probably needed to pay to get the big center field upgrade they desired. It was either going to be paying a Dexter Fowler this, or giving up top prospects to acquire a Charlie Blackmon. It also likely makes St. Louis feel a bit better about losing out to the Cubs for Jason Heyward last offseason.