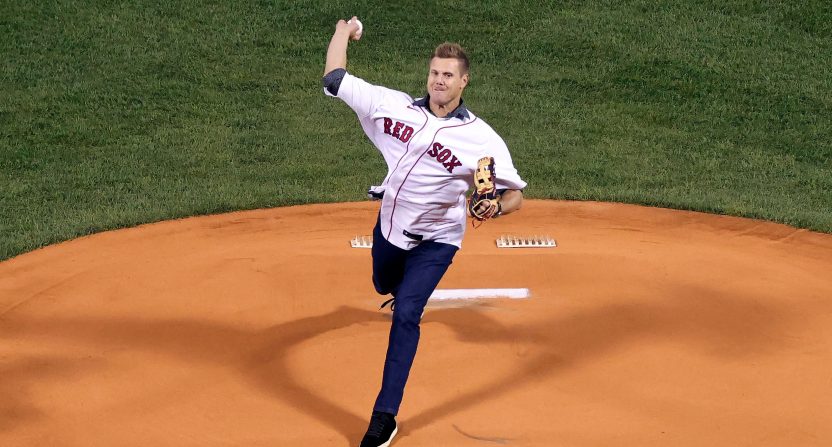 Former MLB All-Star Jonathan Papelbon has been making headlines as of late. With hot takes on Bryce Harper and Derek Jeter‘s documentary, the former Red Sox pitcher couldn’t resist but to throw out his opinion on Fernando Tatis Jr‘s 80-game suspension for PED usage.

On an episode of WEEI’s The Bradfo Sho Sunday, Papelbon said the situation “almost enrages” him. He said that if he was on the mound pitching today, he would drill Tatis whenever he got the chance.

“This whole Tatis stuff, man, it almost enrages me,” Papelbon said. “I worked my ass off so long and so hard and did it the right way. For me, to see something like that, it hurts me so bad.”

“I’ll tell you right now: If I was pitching, every single time I face that dude, I’m drilling him. I don’t care if I’m bringing in a run and losing the game.”

Papelbon (seen above throwing out the first pitch ahead of Game 3 of the 2021 ALCS) had to face numerous PED users during his career, but he never flat-out said the things he said here about Tatis. However, later in this interview, he brought up the names of a few other notable sluggers who he wouldn’t mind coming high and inside on, or even hitting.

“Yeah: Manny Machado. Sammy Sosa. I can go on and on,” he said. “The thing is, it’s a mutual respect from the players, and all that’s gone. I feel like that’s what’s missing from the game. It’s one of those things now, where look, if you’re not protecting your team, it’s like, do you want to give into the bully on the block and keep getting your ass kicked every day, or are you going to punch back?”

Papelbon was highly critical of Tatis, but Tatis’ own teammates have also blasted him following that failed drug test, including Mike Clevinger and Joe Musgrove.

“I think his teammates are pissed off,” Papelbon continued, “because, No. 1, they gotta answer questions about it instead of focusing on what really matters. In my opinion, if this continues, the Padres are just gonna fall by the wayside.”