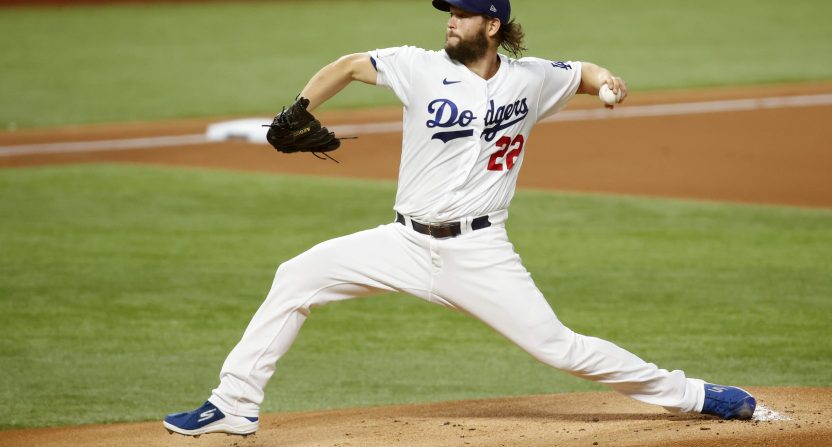 The Los Angeles Dodgers took down the Tampa Bay Rays 8-3 in Game 1 of the World Series at Globe Life Field. Here are our main takeaways from the Dodgers’ victory:

Clayton Kershaw did anything but “choke” in Game 1

There isn’t a player with more debated postseason narratives than the Dodgers’ longtime ace. Even MLB’s official website recently had an article debating if Kershaw is a “playoff choker.”

Lol I can't believe this is on the MLB official website (and linked this way on their front page). https://t.co/qK5yuHEUPq pic.twitter.com/rAeK4FCvbb

Well, Kershaw was brilliant in Game 1, allowing just one earned run and two hits over six innings, while striking out eight and walking just one.

Clayton Kershaw has it working so far in Game 1. #WorldSeries pic.twitter.com/hHT6HzfZGE

This was Clayton Kershaw’s ninth career postseason start of 6+ IP and no more than 1 earned run and 1 walk. Most in MLB history.

He only threw 78 pitches, but was wisely pulled by manager Dave Roberts with the Dodgers up 6-1. So, he’ll be well-rested for his next start, and could make multiple more appearances in this series if necessary.

Bellinger dislocated his right shoulder while celebrating his go-ahead homer in Game 7 of the NLCS. Naturally, there were concerns about his ability to play through the pain, but he quickly made it clear that- yes, he can play through it.

Maybe there’s no real issue, or maybe it’s just adrenaline taking over for a professional athlete looking for their first championship, but Bellinger crushed a two-run homer off Tyler Glasnow to give the Dodgers a 2-0 lead in the fourth inning.

It seems Cody Bellinger can handle that shoulder discomfort.

He also made this awesome catch to cap things off in the ninth inning:

And Cody Bellinger throws in a robbed HR because why not pic.twitter.com/bSBos7QHXQ

Mookie Betts does so, so many things to win baseball games

Baseball nerds and Boston Red Sox fans have been aware of this for a long time. After all, Betts’ 2018 season produced a higher WAR (10.6) than Mike Trout ever has.

But Betts is really showing the world this October how he’s a complete player that does everything you’d want a position player to be able to do- and tremendously. He hits, he hits for power, he takes walks, he doesn’t strike out much, he has terrific athleticism, he gets great jumps on batted balls, he takes great routes on flyballs, he has remarkable instincts, he gets great reads on batted balls both as a defender and baserunner, he cuts the corners beautifully on the basepaths, etc. You name it, he does it. That’s why the Dodgers gave him a $365 million contract.

In Game 1, he went 2-for-4 with a walk and opposite field home run.

Mookie Betts keeps doing it all! Opposite field dinger, which was followed by another Dodgers run to make it 8-1. The rout is on in Game 1. #WorldSeries pic.twitter.com/7BTqZlNAbd

He also stole second and third base in the fifth inning, before scoring on a groundball thanks to his jump and speed.

Mookie Betts' all-around value has shown up so much in the postseason. Here's his baserunning leading to the Dodgers' 3rd run (after he stole 3rd base too). #WorldSeries pic.twitter.com/DHuaqO2qNp

Tampa Bay can’t count on Randy Arozarena to put up prime Barry Bonds numbers forever, and they will need a few more players to step up offensively in this series in order to be able to beat the Dodgers four times in six games. Over the Rays’ last 10 games, they have topped four runs just once, and that was a game they scored five runs.

The Rays have now had 8 or fewer hits in each of their last 10 games.

That's the longest streak ever within a single-postseason.

The only longer streak spanning postseasons was by the Yankees in 1921-22 World Series (13 games). pic.twitter.com/LMg6obLv5Q

That may get it done against some teams in the playoffs if you can pitch extremely well and play great defense, but it’s (almost certainly) not going to get it done against a Dodgers team that has a very deep, juggernaut offense built to beat pitching from either side and any style.