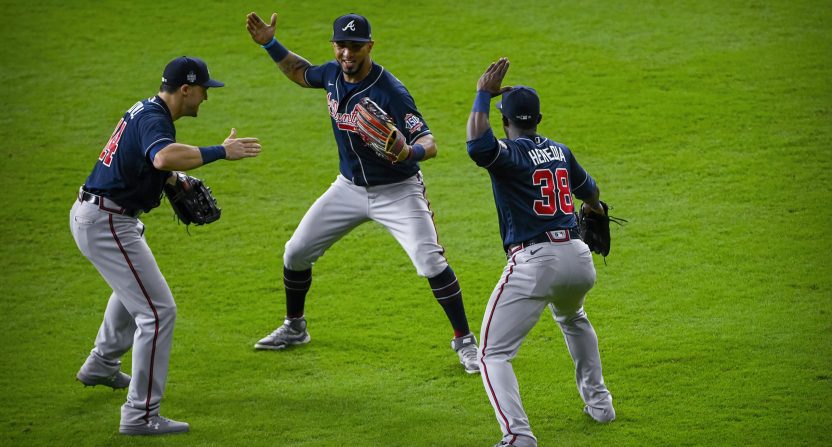 The Atlanta Braves took down the Houston Astros 6-2 in Game 1 of the World Series on Tuesday night at Minute Maid Park. Here are our main takeaways from the Braves’ victory:

The Atlanta Braves — winners of “only” 88 games in the 2021 regular season — took down the juggernaut Los Angeles Dodgers convincingly in the NLCS, and they continued to stay red-hot on literally their first swing of the World Series.

Jorge Soler leads off the World Series with a home run! ⚾️💣 pic.twitter.com/ToTA6NTR2r

Later in the inning, Austin Riley hit an RBI double to make it 2-0 Braves.

And in the top of the third inning, Adam Duvall hit a two-run blast to give Atlanta a 5-0 lead.

Adam Duvall with a 2-run dinger to make it 5-0 Braves! #WorldSeries pic.twitter.com/tQoTZjxJC6

Atlanta became the first team in MLB history to score in each of the first three innings of Game 1.

Charlie Morton is done for the World Series

While the Braves will gladly take a victory to start the best-of-seven series, they lost starting pitcher Charlie Morton to a right fibula fracture. Morton exited the game with one out in the third inning after looking uncomfortable on a pitch.

He suffered the injury after taking a comebacker off his leg in the second inning.

This was the Gurriel comebacker that got Morton's shin in the second inning. My guess is he had to exit because the area swelled over the past inning. pic.twitter.com/NuV4Zm50Yh

He threw another full inning — with two strikeouts — after that! Incredible.

But it’s a massive loss for Atlanta. Morton is arguably their ace and has been excellent all season. The Braves will certainly have to get creative with their staff over the remainder of the series, and they’ll need some other pitchers to step up.

Well, other Braves pitchers immediately stepped up in this one! A.J. Minter replaced Morton and proceeded to throw a career-high 43 pitches, allowing one run over 2 2/3 innings.

Massive strikeout of Yordan Álvarez by AJ Minter to get out of the third.

Braves gonna need a lot of work from their bullpen tonight. Good news is they lead 5-0. pic.twitter.com/HLkaOBZ4w0

Getting the 2 2/3 innings from Minter was particularly huge, and while he’ll surely be down for Game 2, the Braves’ bullpen should otherwise be in fine shape.

Each team should view this as a pretty crucial game.

For the Braves, going up 2-0 with three home games (if necessary) still to come would be huge- and especially when they know that they don’t have Morton for the rest of the series. They’d feel good about their chances to mix and match, be creative with the staff, find a way to win two games in five potential tries.

And on the other side, the Astros of course don’t want to fall behind 2-0 and lose home-field advantage. If they’re able to even up the series, they’ll feel pretty good about that with the Braves’ pitching situation. Then again, (ahead of this series) the Astros also lost stud starting pitcher Lance McCullers Jr. to a forearm injury, so they’re in a similar spot with needing to be creative with the staff.

It’s going to be a really interesting series, and these teams are right back at it in on Wednesday night for Game 2 in Houston.