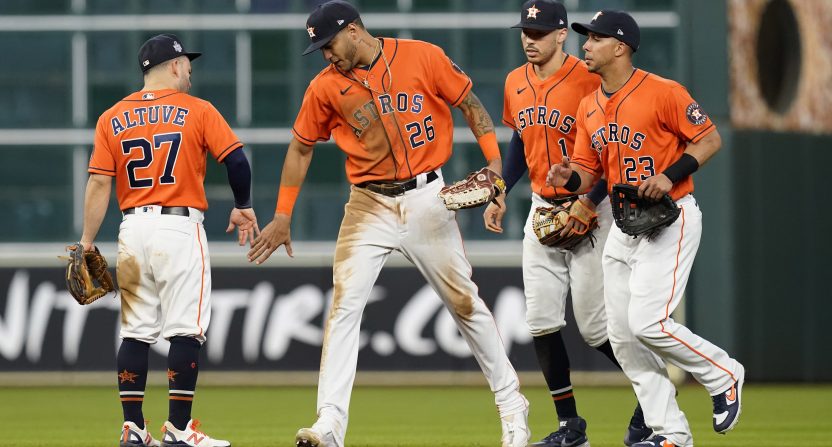 The Houston Astros evened up the World Series with a 7-2 win over the Atlanta Braves in Game 2 at Minute Maid Park. Here are our main takeaways from the Astros’ victory:

Houston scored five of their seven runs over the first two innings against left-hander Max Fried, with four of those runs coming in the second inning (after the Braves had tied it up 1-1 on a Travis d’Arnaud homer). It was 2-1 Astros in the second inning when Martín Maldonado hit a groundball single through the left side to score one run… and then it became two runs after the Braves threw the ball away.

The Astros jump out to a 4-1 lead in Game 2. #WorldSeries pic.twitter.com/XFKPELu6EI

Hit machine Michael Brantley followed that with a two-out RBI single to make it 5-1 Astros in the second inning.

And on the first pitch thrown by Braves reliever Drew Smyly, Jose Altuve cranked a solo dinger to give the Astros a 7-2 lead in the seventh.

That’s career postseason home run No. 22 for Altuve, tying him with Bernie Williams for second on the all-time list. Manny Ramirez has a seven-homer lead with an incredible 29 postseason blasts, but perhaps the 21-year-old Altuve can eventually catch him.

Game 2 was essentially the complete opposite of Game 1, a 6-2 Braves win.

The Houston pitching staff was terrific

Three strikeouts for José Urquidy in the first. 🔥 pic.twitter.com/BfXYZwG7jq

With Atlanta starting pitcher Charlie Morton done for the World Series due to a right fibula fracture that forced him to exit the third inning of Game 1, the Braves really needed length from Fried in Game 2. And they have to be satisfied that even with Fried’s struggles (allowing six earned runs), he was still able to grind it out for five innings over 86 pitches. No Braves reliever had to throw more than one inning in the game.

Now, the Braves should have a fresh bullpen to feel free to be creative with over the next few games.

So now the series heads to Atlanta (Truist Park) for Games 3, 4, and 5, which will be on consecutive days (Friday-Sunday).

Both teams have to feel pretty good with where they’re at. In the Braves’ case as the road team to this point, you’re happy with a split in the first two games of a seven-game series, with home-field reversing in their favor now. For the Astros, they stepped up in a very important Game 2 to even things up, and they know that the Braves are down a hugely important starter in Morton.

Five Thirty Eight has the World Series title odds at exactly 50-50 (as the series results so far would suggest!), while FanGraphs gives the Astros a 54.9% chance to win the series.