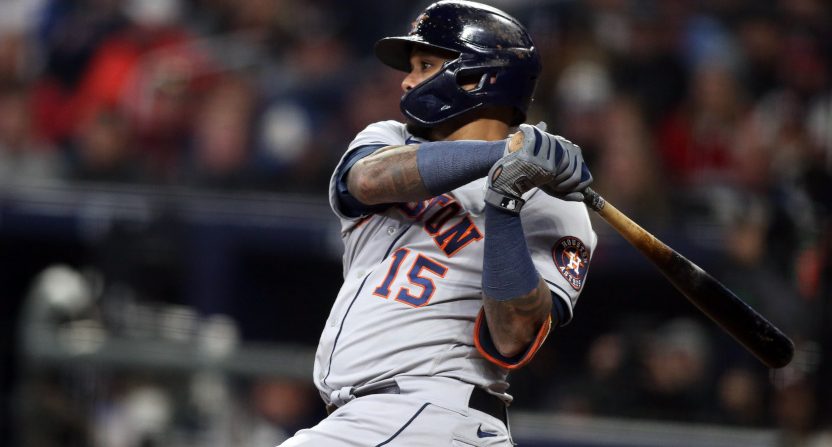 The Houston Astros have extended the World Series to at least a sixth game after coming up with a 9-5 win in Game 5. Here are our key takeaways from this one.

You cannot stop Martín Maldonado, you can only hope to contain him

The seemingly-obvious weak spot in a powerful Astros’ lineup is catcher Martín Maldonado. Maldonado has never been a particular offensive threat, instead renowned for his defense and his game-calling, but even by his standards, the .172/.272/.300 line he put up in the 2021 regular season was poor. And he was hitting poorly in the postseason too, batting .098/.159/.098 heading into Game 4. But he got a hit there (unusually enough, batting ninth, with pitcher Zack Greinke put in the eighth spot; Greinke became only the second pitcher ever in the World Series to hit outside the ninth spot, following only Babe Ruth), and then he came up big Sunday from the eighth spot. He went one for three in Game 5, but became the first player in postseason history to record a RBI on a hit, walk, and a sacrifice fly in one game. Here’s that hit, a RBI double in the seventh:

Martin Maldonado is up to something tonight! pic.twitter.com/ckvVTWAb7o

And here’s that crucial walk, a key part of the Astros’ three-run rally in the fifth to take their first lead of the game:

A run comes in on the bases loaded walk and we are tied 👀 pic.twitter.com/NCnr10lip3

That walk also made some history:

Martín Maldonado was hitting .095 this postseason entering his bases-loaded walk

We’ll see if Maldonado can continue to contribute at the plate in Game 6, but he certainly did in Game 5.

Unexpected contributions at the plate were key

Beyond Maldonado, the Astros also got key hits from a few other unusual suspects. One was pinch-hitter Marwin González, who they only signed in August on a minor-league contract (after he was released by the Red Sox), and who was a late addition to the World Series roster. Here, he pinch-hit in the pitcher’s spot following that walk from Maldonado, and he promptly hit a two-run single that gave the Astros their first lead of the night:

Another unusual pinch-hitter was Greinke, put in the game only to hit following his pitching Saturday. And he promptly came up with a hit:

Astros RHP Zack Greinke enters the game as a pinch hitter… and gets another hit!

He's 2-for-3 in the #WorldSeries 🔥 pic.twitter.com/AHrod1Cxo6

And that made some history:

Grienke's base hit had an exit velocity of 105.9 mph, the hardest-hit ball of the game so far for the Astros. https://t.co/M8HodVrB0K

That particular hit in the fourth didn’t lead to a run, but it did contribute to the pressure on Atlanta’s bullpen. Starter Tucker Davidson only got six outs and was pulled in the third. He allowed four runs in total (two earned), and the Braves had to stretch their already-heavily-used bullpen after that. And yes, the actual usual suspects were good at the plate for the Astros as well, with Carlos Correa and Yuli Gurriel each getting three hits and Alex Bregman and Jose Altuve getting one each. But the unlikely contributors were important here.

This game started as well as possible for Atlanta. After getting out of the top of the first on only three batters (a flyout, a walk, and a groundout into a double play), Jorge Soler and Austin Riley both singled in the bottom of the first (separated by outs from Freddie Freeman and Ozzie Albies). And then Adam Duvall cranked this grand slam:

GRAND SLAM!! WHAT A WAY TO START GAME 5!

And the game could have been over then. The Astros soon battled back with two runs in each of the second and third innings. And while the Braves added another run on a Freddie Freeman solo shot in the bottom of the third, their offense went quiet after that, and wouldn’t score the rest of the way.

A lot of the debate in this series has been about the usage of bullpens, with Atlanta manager Brian Snitker in particular getting criticized for pulling starter Ian Anderson in the fifth inning of Game 3 while he had a no-hitter. And the Braves again went to their pen quickly after early trouble; as mentioned above, starter Tucker Davidson was pulled in the third after only recording six outs (on 52 pitches). In contrast, Houston manager Dusty Baker left starter Framber Valdez in after Duvall’s first-inning grand slam, and he promptly got the third out of the inning and a one-two-three second. In the third, Valdez gave up that solo shot to Freemand, but he stayed in after that too and got two further outs; he was only pulled after walking Eddie Rosario. While his final stat line of five runs allowed in two and two-thirds innings wasn’t great, the Astros got 47 pitches and eight innings out of him, and that helped reduce the bullpen load a bit.