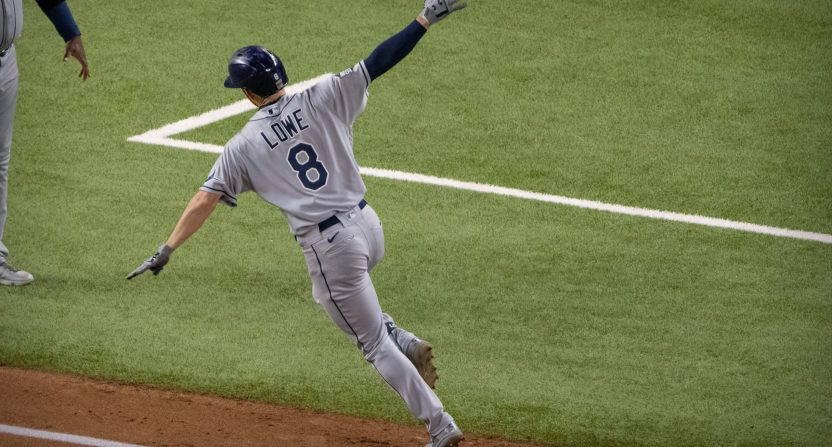 The Tampa Bay Rays beat the Los Angeles Dodgers 6-4 in Game 2 of the World Series on Wednesday night to even up the series. Here are our main takeaways from the Rays’ victory:

Tony Gonsolin got the start for the Los Angeles Dodgers, but this was a planned “bullpen game,” and Gonsolin only got four outs before Dodgers manager Dave Roberts turned to the bullpen. The Dodgers used seven pitchers in Game 2, and they combined to allow six earned runs. Four pitchers allowed at least one run, and no pitcher went more than two innings. Dustin May had the most trouble, allowing three earned runs over 1 1/3 innings.

Clayton Kershaw was terrific for the Dodgers over six innings in Game 1, and they’re certainly hopeful that Walker Buehler can have similar success in Game 3. Right now, these are the only two Dodgers pitchers you can count on going traditional starter innings. And if Game 2 is any indication, the Dodgers really want to win the Kershaw and Buehler starts.

In the first inning, Lowe crushed a 410-foot solo home run to left-center field off Gonsolin to open the Game 2 scoring.

Brandon Lowe gets the Rays an early lead in Game 2 of the #WorldSeries with this solo blast to left-center. 💣 pic.twitter.com/ijirJjKlxU

In the fifth inning, Lowe once again hit a blast the other way, this time for a two-run shot off Dustin May to give the Rays a 5-0 lead.

Brandon Lowe crushes a homer the other way for the second time tonight. Dustin May immediately knew it was gone. 5-0 Rays. #WorldSeries pic.twitter.com/4Hx04YxlzV

That’s remarkable hitting to do even once in a game, but to do it twice, and in a crucial game in the World Series? Incredibly impressive stuff from Lowe.

The Rays’ offense finally produced, and without Randy Arozarena driving in runs

After Game 1, we mentioned how the Rays hadn’t scored over five runs a single time in their last 10 games (and had scored five just once), and how the offense would need to be much more than Arozarena in order to beat the Dodgers four times.

Well, they got this done in Game 2, with six runs and zero driven in by Arozarena. Tampa Bay got hits from eight different players, with Lowe and Joey Wendle each driving in three runs.

The Rays will need this more going forward, and it surely has to be a morale boost to know that they’re not completely dependent on one or two players right now to score runs.

This may not have been a “must-win” for the Rays, but it was close

Sure, the Rays could’ve overcome a 2-0 deficit (it is baseball, after all), but it would’ve been *really* difficult to beat this Dodgers team four times in five games. Additionally, Game 2 was particularly crucial with 2018 AL Cy Young winner Blake Snell (who allowed two earned runs and struck out nine over 4 2/3 innings) going up against a bullpen game.

For all intents and purposes, the Rays needed this one, and they got it done.

Bonus section: What was this guy thinking?

Joe Buck was as confused as the rest of us.

This guy caught a home run at the #WorldSeries, then threw his glove onto the field- for some reason. pic.twitter.com/LxEnQpIhBP

The World Series gets a day off on Thursday, before Buehler vs. Charlie Morton in Game 3 on Friday night.