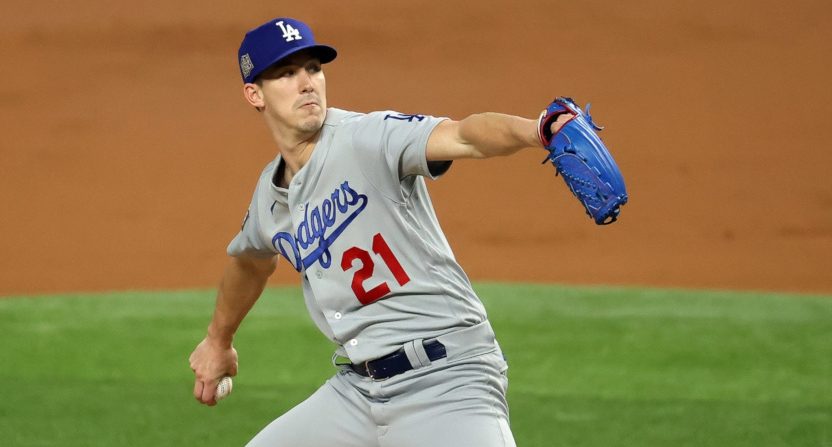 The Los Angeles Dodgers took down the Tampa Bay Rays 6-2 Friday in Game 3 of the World Series, giving them a 2-1 series lead. As with Game 1 and Game 2, here are four takeaways from Game 3.

Walker Buehler gave the Dodgers the pitching they needed

Game 1’s 8-3 win saw the Dodgers get six strong innings from Clayton Kershaw, who allowed just one earned run and two hits in that span and struck out eight along the way (with one walk). In Game 2’s 6-4 loss, they hit pitching troubles with an attempted “bullpen game,” only getting four outs from starter Tony Gonsolin and having the relievers who replaced him give up five further earned runs. The Dodgers’ hope was that Buehler could give them more of a traditional starting performance, something they’ve been short on. And he delivered in spades, going six innings and allowing just three hits, one walk and one earned run while striking out 10.

That put him in some good company:

Walker Buehler is the 7th different Dodgers pitcher with a 10-strikeout game in the World Series.

It'll be just the 3rd Dodgers WS performance of 10 strikeouts and 3 or fewer hits allowed. Sandy Koufax and Clayton Kershaw each did that once. pic.twitter.com/pGEiswnpbB

And that pitching performance went a long way for the Dodgers.

Never count out the Dodgers with two outs

The Dodgers have seen incredible hitting results with two outs this postseason, and those continued Friday. First, Justin Turner thumped a solo shot with two outs in the first inning:

Dodgers' Justin Turner gets the Game 3 scoring started with the solo blast in the 1st. #WorldSeries pic.twitter.com/HElYtK20C6

Then a third-inning two-out rally started with Corey Seager getting hit by a pitch. Turner then hit another double, and Max Muncy knocked them both in:

The Dodgers keep doing damage with 2 outs. Max Muncy with a 2-run single to make it 3-0 Los Angeles in the 3rd. #WorldSeries pic.twitter.com/hhWB5p1Hbp

Mookie Betts added another two-out run with a single in the fourth:

Mookie Betts provides another 2-out run for the Dodgers with this RBI single to make it 5-0.

Thus, five of the Dodgers’ six runs were scored from at-bats that started with two outs. And they’ve now produced 50 runs with two outs this postseason, a MLB record for a single postseason. So they’re not a team to count out at that point.

Austin Barnes made some unexpected contributions

Barnes was the Dodgers’ number-nine hitter Friday, and he’s not always their catcher; he appeared in just 29 games this regular season and got just 104 plate appearances, hitting .244/.353/.314. So he’s not the threat many were watching for in the Los Angeles lineup. But he proved rather important, with both the home run seen above and with a perfectly-executed sacrifice bunt in the fourth:

And that put him in rare company:

The last player with a run-scoring sac bunt AND a home run in a World Series game:

Ji-Man Choi made some impressive plays at first

The Rays’ bats were pretty quiet in this one, but they had some good moments in the field. Several of those came from first baseman Ji-Man Choi, who the team roster lists as 6’1”, 260 pounds. He’s certainly a bigger guy, but he showed off a lot of athleticism and flexibility Friday, first with some splits to dig a throw out of the dirt:

Sore just looking at it. pic.twitter.com/h31GFBm45u

And it wasn’t just that play. Choi also made at least two jumping catches and tags at first. Here’s one of those:

im putting ji-man choi in the chubby but effective group with maroon pic.twitter.com/ONljguSMhC

The Rays will need more hitting to have a chance in this series, but they have some pretty strong defenders out there, and Choi certainly fit into that category Friday.

Game 4 of this series is Saturday, with first pitch set for 8:08 p.m. Eastern.