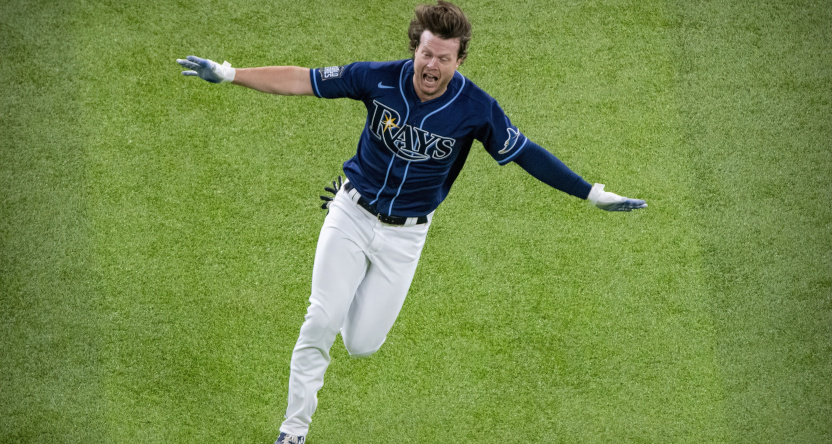 The Tampa Bay Rays took down the Los Angeles Dodgers 8-7 Saturday in Game 4 of the World Series, giving them a 2-1 series lead. As with Game 1, Game 2, and Game 3, here are four takeaways from Game 4.

Phillips (seen celebrating above) wasn’t even on the Rays’ roster for the American League Championship Series, and he wasn’t with them for this whole year; he arrived mid-season thanks to a trade with the Kansas City Royals and appeared in just 17 games for the Rays during the regular season, hitting .150/.320/.400 in 25 plate appearances. He entered Saturday’s game in the eighth inning as a pinch-runner and stayed in to field, then came up with two outs and runners on first and second in the ninth. And then he singled to center field, and misplays from Chris Taylor and Will Smith let two runs score and gave the Rays the win:

The Dodgers’ two-out hitting has continued

Not one of Corey Seager's better swings from his terrific postseason, but still effective. Dodgers back on top 7-6. #WorldSeries pic.twitter.com/lPVMq9Shmy

It’s proven exceptionally difficult for the Rays to get that third out this series.

The Rays still have a ton of power

All six of the Rays’ runs before Phillips’ single came on home runs. Here are those shots:

Brandon Lowe keeps crushing dingers the other way. This time it's for a go-ahead 3-run homer. Rays lead the Dodgers 5-4 in the 6th. #WorldSeries pic.twitter.com/xVNH3VO8j5

Back-and-forth we go! Rays tie it up at 6 on this Kevin Kiermaier blast. #WorldSeries pic.twitter.com/tDXysWTWL4

While the final runs came from Phillips’ single, it was the Rays’ power that got them to that point.

The Dodgers may have some relief concerns

Los Angeles got off to a good pitching start Saturday, with starter Julio Urías keeping the Rays off the board for three innings. But in the fourth inning, Urías gave up a solo home run to Randy Arozarena (Arozarena’s record-setting ninth HR of the postseason). And in the fifth, he gave up a solo shot to Hunter Renfroe. Urías then got the next two outs, but was pulled after that, leaving the Dodgers’ bullpen to get 13 outs.

While Adam Kolarek and Brudsar Graterol managed to get one and two outs respectively without giving up an earned run (both in the eighth), the other Los Angeles relievers weren’t as successful; Blake Treinen, Pedro Báez, and Kenley Jansen each got tagged for two earned runs. And that’s a lot of bullpen appearances for the Dodgers too. They’ll be hoping for starter Clayton Kershaw to go deep in Sunday’s Game 5 (an 8:08 p.m. ET start), but if he isn’t able to do that, there’s going to be a lot of pressure on the bullpen.