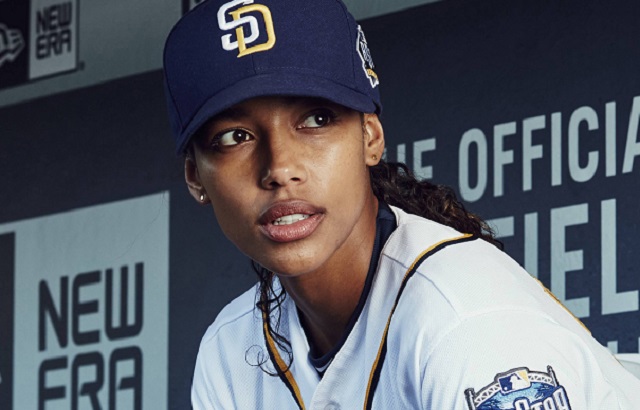 Oh, no. You were doing so well, Pitch. The pilot episode of FOX’s new drama about the first woman to play Major League Baseball was impressive, moving at a good pace, establishing some intriguing characters and passing the eyeball test with its limited baseball action. But then, the story introduced a twist in its final two minutes.

If you haven’t watched Pitch yet, we won’t spoil that twist here. Considering that FOX has been playing the pilot episode at minor league ballparks throughout the country for the past month or so, in an effort to generate interest for the show, it’s a bit surprising that the twist hasn’t gotten out. (Or maybe we’ve become pretty good at avoiding that sort of thing.) Producers may have implored viewers not to give anything away. Maybe we’ve even become sophisticated enough as TV viewers to keep such a thing under wraps.

What would be concerning is if people watched the show and didn’t care enough to give away the twist. If that’s the case, it will become clearer in the weeks to come, depending on the ratings Pitch draws and word of mouth it generates among TV fans.

It’s difficult (and not really fair) to grade the merits of a TV series based on one episode. But viewers will find a lot to enjoy here. Producers Dan Fogelman and Rick Singer (who also wrote the pilot), along with director Paris Barclay, don’t start slow with backstory and exposition. They drop us right into the action, beginning the episode on the morning of Baker’s first start for the San Diego Padres. This is happening. The Padres called her up to make a spot start and the story has become a media sensation.

Rather than just tell us that Baker’s debut is causing an uproar (though Pitch uses FS1 personalities like Colin Cowherd and Katie Nolan to give us some sports talk punditry), the show takes us on a ride from the hotel to the ballpark, avoiding crowds through back corridors and kitchens. Eventually, Baker does see all of the people waiting for her, notably girls inspired by her example, holding up signs (“I’m next!”) indicating that their world of possibilities has just opened up. Baker appears ready to seize the moment and show everyone that she’s not a gimmick. But as the story develops, it soon becomes apparent that the pressure and responsibility attached to what she’s doing weighs heavily on her.

Kylie Bunbury is very good as Baker. She’s brash and tough when needed (especially with teammates trying to dismiss her), yet also vulnerable when things don’t go as well as planned for Baker or the Padres. Pitch doesn’t try to tell a fantasy, Disney-type story. Baker is called up to be a spot starter. She’s not a phenom. And since it’s in the trailer and promotional ads, it’s probably not a spoiler to mention that her first start is a disaster, one she arguably makes even worse.

That gives the writers an opportunity to show the politics involved in calling Baker up, as the owner (played by Bob Balaban) wants her to keep pitching because it’s selling tickets and drawing a whole lot of attention to the Padres. The manager (Dan Lauria) sees his clubhouse splintering as a result, and wonders if Baker is worth all the trouble. Then there’s the general manager (Mark Consuelos) forced to play the middle man and make some decisions he’s not comfortable with.

Obviously, the politics also extend to the clubhouse. Baker has a prominent supporter in outfielder Blip Sanders (Mo McRae), who played with her on his way through the Padres’ minor league system and vouches for her talent. (Sanders’ wife is also a friend and confidant.) But the player Baker might have to impress the most is team captain and All-Star catcher Mike Lawson (Mark-Paul Gosselaar), who seemingly has an open mind about the situation — probably because he has to work more closely with her because of his position — and quickly learns that she doesn’t want to be treated any differently because she’s a woman.

Gosselaar does a great job; he clearly loves this role. Who wouldn’t? He’s an elite baseball player, popular with the ladies around town and gets all of the show’s best lines. Yes, the show takes some creative liberties to show how glib Lawson can be and his leadership skills. A key scene with Lawson giving Baker a pep talk on the mound goes on far longer than such a conversation would be allowed to take in a real MLB game. But hey, it’s a great scene.

That might be the only time Pitch really pushes the boundaries of believability, as far as its baseball action. The story does gloss over the fact that the Padres play in the National League, which means Baker would also have to bat, and squanders some potential dramatic opportunities. Maybe that’s something the show will explore in future episodes. But when everything Baker does is the first thing ever done by a woman in MLB, her first at-bat, how the opposing pitcher would approach her, and the final result all would have been intriguing. What about what the manager would ask her to do? Bunt? Swing away? Just stand there and take three strikes? That’s a conversation between characters which would be fun to watch.

There is a whole lot of storytelling potential here beyond the gimmicky premise, and it appears that Fogelman and his team are ready to explore the many possibilities that exist. A lot has also been made about Pitch‘s official partnership with MLB, so perhaps we’ll see some more game action in future episodes than we did in the pilot. The show passed the opening eyeball test, which is an important hurdle to clear with sports fans. Judging by what’s written in advance about the show, that’s something which the producers will continue to take seriously, especially with all of those official uniforms, logos and ballparks part of the scenery.

Then there’s that final twist. It’s not a deal-breaker, and perhaps it’s not something that should have been mentioned. Maybe it’s just the sort of hook that many pilot episodes try to include at the end to keep viewers interested. It’s very possible that what’s revealed won’t have much bearing on the rest of the series. And maybe it reveals something very compelling about Baker’s character and how hard she needs to drive herself to succeed. But it also steps toward an unexpected territory that viewers likely didn’t expect, and may even find somewhat derivative from other TV shows that have been popular in recent years. How the show navigates that, along with rest of the landscape it’s laid out, makes Pitch a show worth following for now.