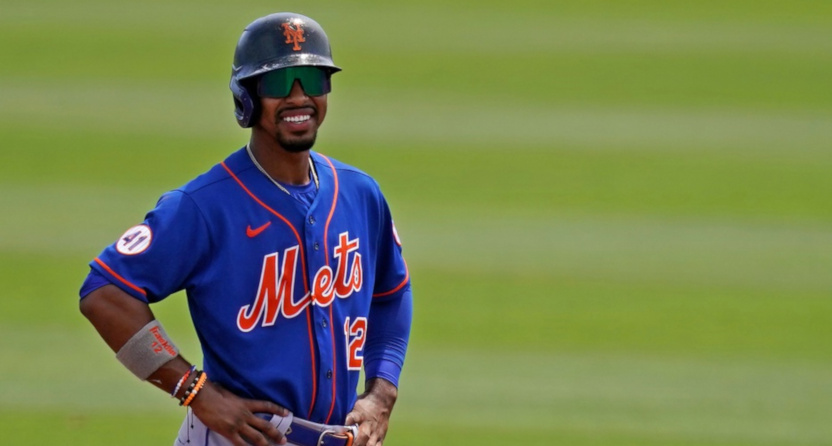 On Wednesday evening, there were plenty of stories out there on the divide between shortstop Francisco Lindor’s desired 12-year, $385 million contract extension and the New York Mets’ proposal of 10 years and $314 million, from the New York Post‘s “Mets, Francisco Lindor have set themselves up for contract disaster” to MLB.com’s “Mets, Lindor seemingly at contract stalemate” to Newsday‘s “Francisco Lindor’s no-deal takes air out of Opening Night.” But Wednesday night, that divide was bridged, with ESPN’s Jeff Passan reporting that Lindor (seen above in a March 29 spring training game) and the team had reached a 10-year, $341 million agreement:

That was then confirmed by many, including Tim Britton of The Athletic and Joel Sherman of the Post, both who had some further details:

The Mets acquired Lindor (and pitcher Carlos Corrasco) from the Cleveland Indians in a February trade, sending Andres Gimenez, Amed Rosario, Isaiah Greene, and Josh Wolf the other way. That trade was generally seen as pretty good for them, with Greene and Wolf only ranked as the No. 9 and No. 10 prospects respectively in their system (as per MLB.com) ahead of the deal. But Lindor was only under contract through 2021, so this would have been a lot less impressive if they weren’t able to reach an extension deal with him. Now that deal’s done, though, their season can get under way in smoother fashion.

On a media note, it’s certainly interesting to see sides that had so recently been reported as at a “stalemate” or an “impasse” turn out to be at anything but. Those above-linked reports were quite adamant that the Mets weren’t going to move from their previous offer. But they did, and they got a deal done. As with carriage disputes, deadlines have a remarkable way of making deals happen, and this is just the latest case of that.