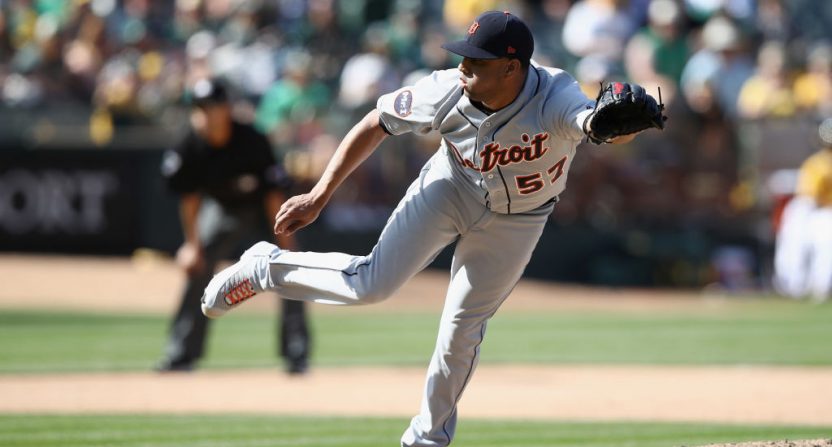 Some of the early storylines that are always worth keeping track of early in a baseball season are closers that may be replaced. Closers blowing saves and costing their team wins are an easy reactionary development to jump on, as many of us settle back into the pace of a MLB season and need to remember that there’s a long way to go and a lot of baseball to be played.

But managers can be just as quick to react as fans when a good start to the season is deemed crucial and some relievers don’t have a firm grasp on ninth-inning duties, perhaps because they had a shaky spring training or another reliever who appears suited for the job is ready to take over at the first sign of struggle. Just over one month into the 2017 MLB season, we’ve already seen that with two teams. And a third closer change appears to be imminent.

The Phillies replaced Jeanmar Gomez as their closer after he served up three home runs and six runs overall in his first four outings. In Washington, no closer may have opened the season under more scrutiny than Blake Treinen. Manager Dusty Baker showed a bit more patience with him, keeping him in the closer role through seven outings. But the Nationals couldn’t take anymore after Treinen could only get one out while allowing two walks and two hits in an April 19 game versus the Atlanta Braves. Since then, the ninth inning has been a carousel for the Nats, due in part to Shawn Kelley and Koda Glover suffering injuries.

We had so much fun walking off Saturday that we just HAD to do it again on Sunday. #RootedInOakland pic.twitter.com/repO2KeWsU

Up next, a closer change looks almost certain with the Detroit Tigers after Francisco Rodriguez blew a 6-5 lead in the ninth, teeing up a three-run homer to Ryon Healy on an 89 mph fastball left high in the strike zone and right down the middle of the plate. It almost would’ve been rude for Healy to decline such a generous invitation.

Sunday’s outing was the second consecutive blown save for Rodriguez, resulting in a disappointing start to the Tigers’ nine-game road trip. Detroit has an off-day on Monday, which gives manager Brad Ausmus time to mull over what appears to be an obvious move.

K-Rod has been L-Rod this season for the Tigers, absolutely awful. In 13 appearances, the 35-year-old reliever has compiled an 8.49 ERA with 19 hits and 12 runs (11 earned) allowed in 11.2 innings. Rodriguez has 13 strikeouts, which is the one positive number to point to in his statline. His diminishing fastball has slowed down even further, averaging 88.2 mph, and that once-formidable change-up isn’t fooling anyone anymore. Opposing batters are hitting .352 against him with a 1.129 OPS.

"We're going to have to have a discussion," Tigers manager Brad Ausmus said, regarding the closer's role.

That was certainly more understated than the obvious statement saying that Rodriguez can’t be the Tigers’ closer anymore if they have any hope of competing in a surprisingly competitive AL Central division.

What Ausmus could have said was “We’re going to have this discussion again” or “Yep, we’ve been having this discussion for the past three months.” Rodriguez also pitched terribly in spring training, notching a 12.27 ERA and allowing six hits with five runs in just 3.2 innings. OK, we shouldn’t put too much stock in spring stats, but this was a number warranting plenty of concern. The Tigers and their fans knew Rodriguez was looking vulnerable, yet hoped he’d show a veteran’s resolve and pitch his way out of it.

Who couldn’t sleep last night because they were still too pumped? #RootedInOakland pic.twitter.com/ud7nHcxO1G

Acquiring Rodriguez was a clever, low-cost path to finding a closer for Tigers general manager Al Avila. Detroit couldn’t afford a free-agent closer and had no suitable relievers ready to assume ninth-inning responsibilities, at least not the capital-C closer that the organization has always favored going back to the very beginning of Dave Dombrowski’s tenure as team president and GM.

The Tigers have always valued a proven commodity at closer, believing that a reliever accustomed to the pressures of the ninth inning was best for the team, whether it was rebuilding or contending. Signing free-agent closers has never been a smart way for MLB teams to spend money, but Detroit exacerbated the issue by bringing in big names who were at the tail end of their careers with rapidly diminishing skills. Troy Percival, Joe Nathan, now Francisco Rodriguez.

They got lucky with Jose Valverde and his 49 saves in 49 chances in 2011, but Papa Grande showed himself to be a regular-season phenomenon, exposed in the postseason. Their most successful free-agent closer was probably Todd Jones, who notched 93 saves in his second stint with the team despite an ERA well over 4.00 and an inability to strike out anyone.

Detroit is continuing to pay for not being able to develop a closer — or few young relievers, for that matter — during the Dombrowski and Avila regimes. In 2008, seven of the team’s first 10 draft picks were relievers and none of those guys — Cody Satterwhite, Robbie Weinhardt, and Scott Green among them — stuck in the big leagues. Joel Zumaya’s arm couldn’t keep up with his flamethrowing potential. Once upon a time, Casey Fien was a thing in the Tigers’ organization. And thus far, Joe Jimenez isn’t ready for prime time.

The Tigers do have someone ready to take over for Rodriguez as closer, which is yet another reason why this move has to be made. Justin Wilson (1.32 ERA, 22 strikeouts in 13.2 innings) is clearly Detroit’s best reliever and though he hasn’t often pitched in the ninth inning, there’s no reason to see if he can’t handle that role. Ausmus can figure out where the rest of his bullpen falls in line and Avila might have to find him some help, but at least the team would have an anchor that hopefully doesn’t squander away wins.

It certainly can’t be any worse than Rodriguez has been, nor much worse than the closer role has been for the Tigers for more than 10 years. Long-term failure at least has a short-term fix, for now.