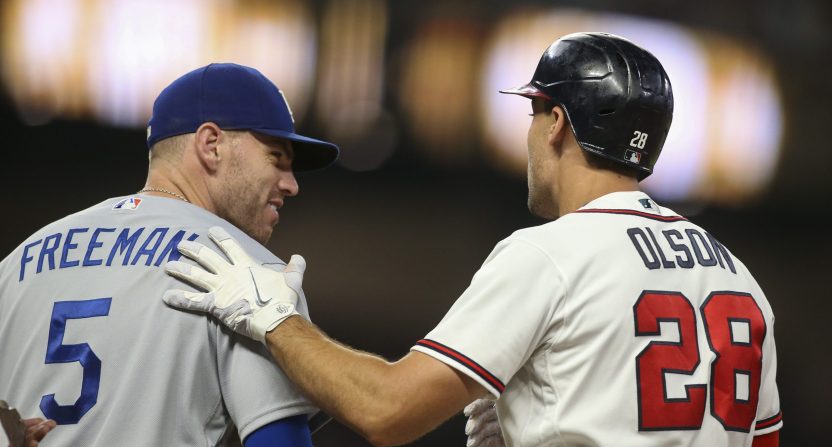 What was an emotional return to Atlanta for Freddie Freeman ended with him firing his agent. And that was apparently not a coincidence.

Fox Sports Radio’s Doug Gottlieb reported on Wednesday that Casey Close, Freeman’s now-former agent, never told him of the offer made by the Atlanta Braves, knowing that Freeman would return. Freeman did not know of this until his new team — the Los Angeles Dodgers — went to Atlanta. Once Freeman found that out, he fired Close.

Casey Close never told Freddie Freeman about the Braves final offer, that is why Freeman fired him. He found out in Atlanta this weekend. It isn’t that rare to have happen in MLB, but it happened – Close knew Freddie would have taken the ATL deal

Baseball fans blasted Close for reportedly not negotiating with his clients’ wishes in mind.

This is absolutely wild. An agent not telling a player about a contract offer? If this is true, Casey Close should never represent a player again. That’s malpractice. https://t.co/Ol6zCVV7OX

Wow… if true this changes everything. Freeman, the Braves and their fans have every right to be pissed.

His agent would've robbed a city its chance to retain a homegrown superstar all for a slightly bigger piece of an already enormous pie. https://t.co/0jp4ZTSCHa

Every client of Casey Close should fire him today. He apparently put his own money over his clients’ best interests. https://t.co/HUJ6pdotSK

This is brutal dude. BRUTAL. Freddie Freeman should have been a Brave for life. https://t.co/kMNToLySME

I knew the timing of the firing had something to do with it. https://t.co/ElYLF4XHiV

This is huge, if true. But hard for me to believe there was no back-channel direct communication between the front office and Freddie himself about that offer. https://t.co/2WZZr5Njdz

If Gottlieb’s report is true, it’s terrible on Close’s end. Agents have to keep the best interests of their clients in mind. It’s one thing to try to steer the client towards the biggest deal. But to not even inform him of any other offers is unconscionable.

So, is that what happened?

The timing is impossible to ignore. Freeman signed his deal with the Dodgers in March. For more than three months, there didn’t seem to be an issue. Then, within days of his first trip to Atlanta as a visiting player, he fires the agent.

That said, there also has to be more to this story. Because there’s one elephant in the room that was not addressed.

The Braves traded for Matt Olson — Freeman’s replacement — on March 14 and signed him to a long contract extension the following day. Reports came in that Freeman was signing with Los Angeles late at night on March 16. There are explanations. It’s obviously possible (and even likely) that the Braves got some indication from Freeman’s camp that he was not interested and moved on to replace him. But the timing of events doesn’t exactly line up.

Freeman did not comment on Gottlieb’s report. But chances are, there’s more to this story that will later be revealed.