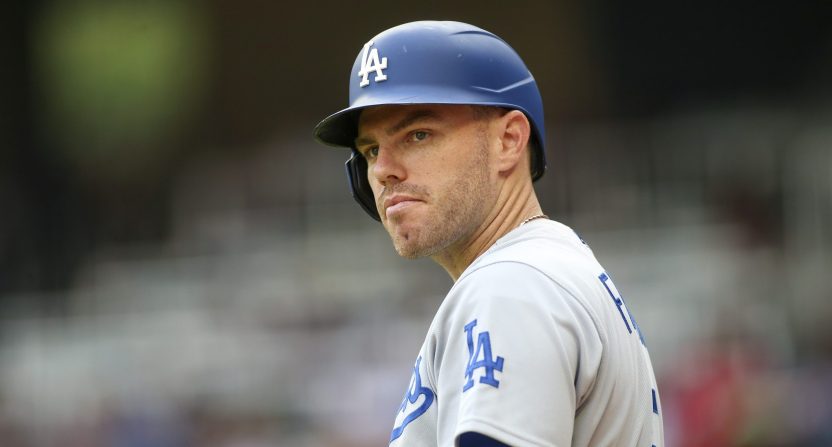 After he was visibly emotional in his return to Atlanta, there was a natural question to ask. Why did Freddie Freeman leave the Atlanta Braves to begin with? Some activity on Tuesday shed some light on that matter.

Buster Olney of ESPN reported on Tuesday that Freeman is changing his representation while Jon Heyman of the New York Post added that Freeman “has requested not to be contacted by any Agents.”

Sources: Freddie Freeman, who has told friends he's angry with how his free-agent negotiations played out, is changing representation, away from Excel. He is currently listed as being self-represented.

Freddie Freeman has requested not to be contacted by any Agents …

(This email is often sent when a player changes agents, and @Buster_ESPN reports Freeman is changing agents)

The MLB world had a big reaction to this news.

The #Braves deserve a fair share of the blame but it’s fairly clear at this point that Excel totally butchered this for all parties. https://t.co/K9QKgXIxJn

The Dodgers could make this right by trading Freddie to the Braves for Ozuna and Rosario. Seems fair to me. Twitter GM’s everywhere will endorse this wonderful idea. https://t.co/2jVO5IaU3X

.@Dodgers How do y'all feel about Marcell Ozuna and Drew Waters https://t.co/Hmz00BQkoY

Freddie Freeman is 32.
I wonder how active he was in his negotiations.
The agents work for the players, but some athletes fail to realize that until it’s too late.
Jose Ramirez signed a below-market extension, but he’s happy in Cleveland. Good for him. https://t.co/B3uwUAo846

Surprised it took Freddie this long honestly. But anyone who watched even a little of the weekend series saw how miserable the poor guy is not being with the Braves https://t.co/Izd188XVPN

Should tell you all you need to know about Freddie Freeman‘s exit from Atlanta https://t.co/SHOuDjBknK

While team contract negotiations aren’t the only thing that agents handle, they are the big one. Freeman is in the first year of a six-year deal with the Los Angeles Dodgers. So, it’s not as though he’ll be looking for a new contract any time soon. This feels kind of like firing a general manager right after the draft or trade deadline.

Also, both Freeman and the Braves have been successful since the split.

The Braves replaced Freeman at first base by trading for Matt Olson and signed Olson to a huge extension. He isn’t doing quite as well as Freeman. But Olson is hitting .249/.349/.459 with 10 home runs. So, he’s not exactly struggling in a huge way. He’s also from Georgia and is five years younger than Freeman.

The timing of this is interesting, to say the least. If this isn’t directly related to his first series in Atlanta as an opponent, it’s one heck of a coincidence.