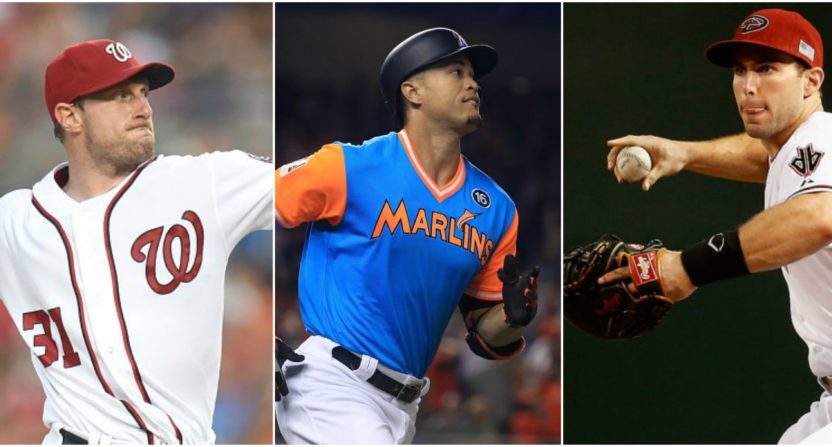 With only a few weeks before the end of the Major League Baseball season, it’s time to talk about awards. And no awards race in baseball is as deep or as confounding as the one for National League MVP, in which somewhere between six and 10 players have legitimate arguments.

We asked our staff to pick the front-runner and got a wide variety of responses.

Who is the National League MVP frontrunner?

Matt Clapp:  It would be hard to have a “wrong” answer here, but I think Giancarlo Stanton should be the MVP frontrunner. It’s not his fault the Marlins aren’t going to be a playoff team. Hell, he basically carried them back into the Wild Card race — at least briefly — with his completely absurd second half.

Stanton has 17 more homers than any other player in the NL! He’s first among NL position players in WAR per Baseball Reference (6.6) second in WAR per FanGraphs (6.0). This run he’s on is unbelievable and has the entire baseball world watching. What he’s doing is historically special.

There’s also the issue that it would be tough to pick and choose with some of these candidates on other teams. The Nationals have Anthony Rendon (FanGraphs’ WAR leader at 6.4) and Bryce Harper. The Dodgers have Corey Seager, Justin Turner, and Chris Taylor. The Rockies have Charlie Blackmon and Nolan Arenado. Can you definitively say which player on those teams is the most deserving? It will be really tough for voters, and that’s going to help the chances for Stanton, as well as Arizona’s Paul Goldschmidt.

Joe Lucia: I’m going with the player I went with back in July: Paul Goldschmidt. The Diamondbacks are in the conversation of “second-best team in baseball” and have opened up a substantial gap between them and the Rockies for the NL’s top Wild Card spot, thanks in large part to Goldschmidt having what amounts to a career year. As mentioned, there are plenty of viable candidates in the National League, but what Goldschmidt is doing is astounding and not getting nearly enough attention.

Liam McGuire:  While I have Joey Votto (a ridiculous .450 OBP) and Paul Goldschmidt up high, to me it’s Giancarlo Stanton.

In his age 27 season, he’s hitting better than his career averages, with a .282 batting average and a .378 OBP. But more importantly, it’s his sheer power. Stanton has hit 53 home runs, 14 more than second-place Khris Davis. That gap is insane. He’s got a legit shot to hit 60 home runs, something I never thought I’d see in the post-steroid era. To put that in perspective, nobody’s hit 60 (who’s been clean) since Roger freaking Maris. Stanton is unquestionably this year’s best — even if the Marlins stink.

Ian Casselberry:  I’m surprising myself with this pick, but after looking at the numbers — and going deeper into them than expected — I’m going with the Rockies’ Charlie Blackmon. He leads the NL in batting and ranks among the top five in OPS. I’ll admit I’m a sucker for triples too, so Blackmon catches my eye with his MLB-leading 14. He also plays a premium defensive position in center field, which I think separates him from Paul Goldschmidt, whose numbers are very similar. (Though we should note Blackmon has been worth -5 Defensive Runs Saved, nearly three runs worse than the average center fielder.)

Any Rockies batter has to be viewed skeptically because of Coors Field, and Blackmon’s numbers at home (.388/.463/.784) are phenomenal. But away from home, he’s still hitting a robust .292/.340/.469. The disparity is substantial, but Blackmon certainly isn’t a slouch on the road.

I realize we shouldn’t factor team performance into the MVP race, but in my view, it also helps that the Rockies are above .500 and contending for the second NL wild card spot. I think it’s worth noting that Blackmon is putting these numbers up for a winning team, making an impact on a playoff contender.

Alex Putterman: First off, let me say you could make a case here for Giancarlo Stanton, Paul Goldschmidt, Anthony Rendon, Joey Votto, Charlie Blackmon, maybe Corey Seager or Nolan Arenado and be totally justified. But I’m going in a different direction, with the guy who leads all NL players in Baseball-Reference’s version of WAR: Max Scherzer.

Some people are never in favor of a pitcher winning MVP, but in a year when every position-player candidate is flawed and a pitcher has a 2.19 ERA and 2.87 FIP while leading the league in strikeouts, I think the pitcher deserves some serious consideration. Scherzer has been the league’s dominant pitcher and its best player. If he does over the final three weeks what he has done all season, he’ll deserve the MVP.