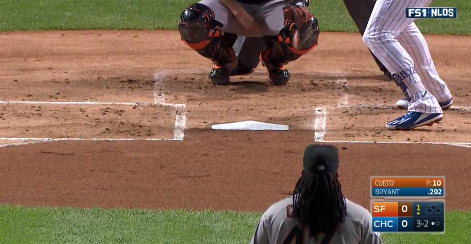 In a MLB postseason which has featured an absurd amount of broadcast gaffes, Fox Sports 1 decided to enter the mix with some new strange camera angles during Game 1 of the NLDS between the San Francisco Giants and Chicago Cubs.

FS1 has opted for whatever reason to use some variation of what ESPN used many years ago in an elevated and more dead center camera angle. That experiment was short-lived and drew similar criticism as fans were used to a slightly angled view of home plate that was more zoomed in and not as elevated.

It was annoying back then and it's annoying now. It was supposed to show the strike zone from straightaway center. Fans didn't like it.

But what has really led to some fury on Twitter has been a new twist that attempts to highlight the catcher relaying signs to pitcher which you can see below.

Amazingly, the angle cut off just about everything that makes baseball interesting. You couldn’t see Cueto’s lower half or much else, Kris Bryant’s top half, the home plate umpire or anyone sitting in the seat behind home plate. Instead, FS1 opted to show Cueto’s head and Posey’s crotch.

It’s the type of camera angle one would expect on a replay of an interesting call-sign (a rarity), but using it as a live shot for 15-plus seconds is insane. Fans just didn’t take kindly to the new angle and unleashed their disdain at the FS1 Twitter account. 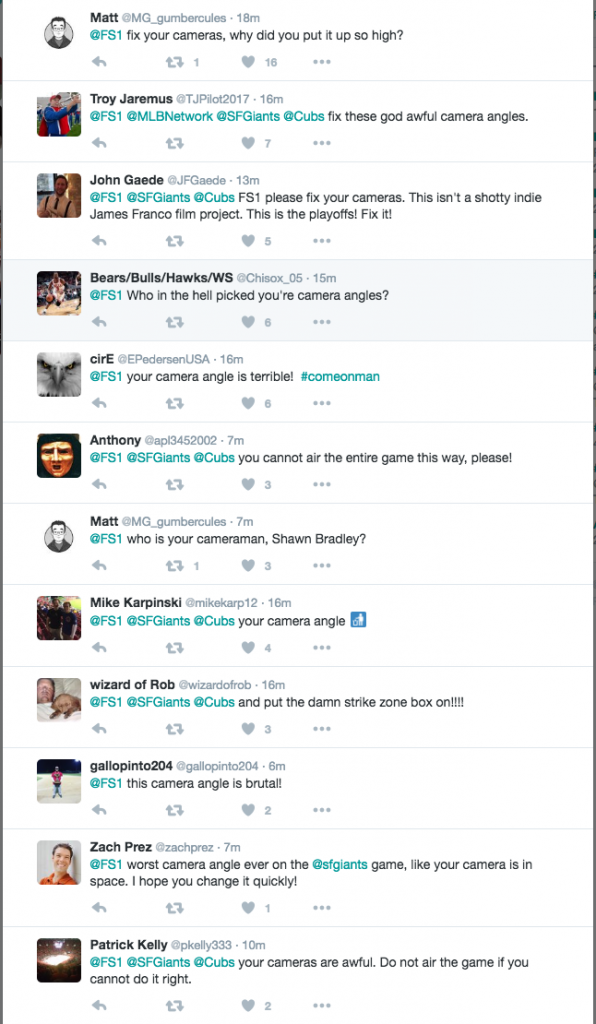 is there a chance Fox doesn't have the rights to this game and they're actually pirating a security camera feed from across the street?

To top that off, viewers also tweeted complaints about having no visible strike zone during the broadcast. 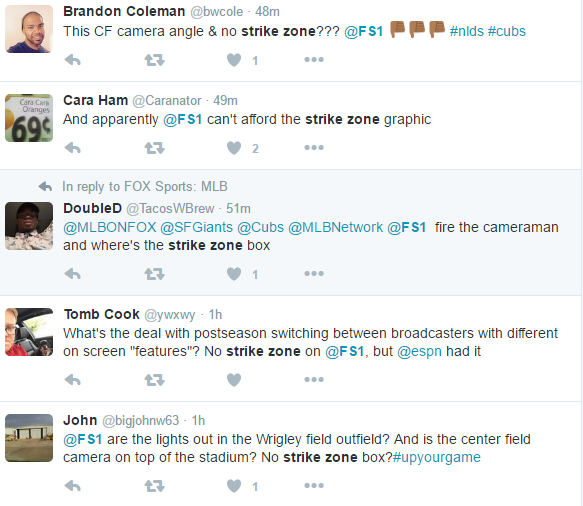 I would say it’s surprising that FS1 thinks the catcher-sign shot during a live shot adds anything to the broadcast, but this is a network that seems to be okay failing 99 times out of 100 with new ideas if one hits. That said, it’s suffocating and provides practically nothing of value.

Throw in no visible strike zone and the recycled “real center field” angle and it makes for an unnecessarily frustrating broadcast. FS1 needs to simplify things and listen to viewer complaints because nobody wins with these angles and broadcast decisions.