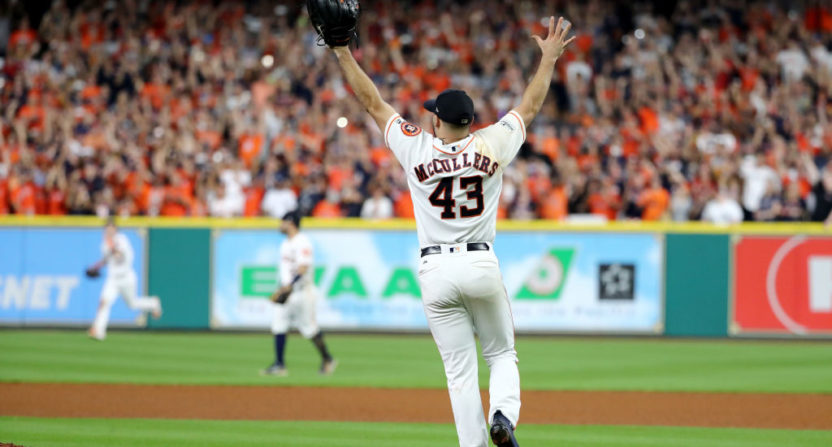 It was only a matter of time.

The Astros won 101 games in the regular season while scoring 196 more runs than their opponents, so when they were outgunned 21-9 through the first five games of the ALCS, you had to know their meek performance couldn’t last.

Sure enough, Houston clobbered the Yankees 11-1 over the final two games of the series to vanquish New York and claim the franchise’s first pennant since 2005. In a 4-0 ALCS-clinching win Saturday, the Astros flashed brilliance in all facets. Their bats, which led the league in every offensive category during the regular season, collected 10 hits off a tough Yankee staff. Their MVP candidate, Jose Altuve, launched a crucial home run. Their manager, A.J. Hinch pulled the right strings. And their pitching staff showcased its impressive depth, with a pair of under-hyped starters combining for a shutout.

It all ended with Lance McCullers retiring Greg Bird on a fly ball to center and Houston players piling atop one another on the mound.

Let’s start with Charlie Morton, who got the ball five days after allowing seven runs in a Game 3 loss. With a fastball in the mid 90s and a curveball with nasty break, Morton held the Yankees to two hits and no runs through five innings while striking out five and walking only one. For a pitcher with a 3.62 ERA during the season and a 10.13 ERA in the playoffs, his performance was as improbable as it was heroic.

Morton left with a lead thanks to a fourth-inning home run by Evan Gattis off Yankees starter CC Sabathia, who was knocked from the game three batters later. Houston added three more runs in the fifth, off reliever Tommy Kahnle, as Altuve launched an opposite-field solo shot and Brian McCann laced a two-run double.

That four-run lead didn’t feel entirely safe, however, given the shaky performance of the Astros’ bullpen during this postseason. As the playoffs have progressed, Hinch has seemingly lost confidence in his relievers one by one, from Chris Devenski to Will Harris to Joe Musgrove. With closer Ken Giles having thrown 23 pitches on Friday night, there was not a single bullpen arm on the roster Hinch figured to feel fully safe turning toward.

McCullers has had a bizarre season. After a so-so start, he found a groove in May and boasted a 2.53 ERA by late-June. Then his performance dipped, he landed on the DL, and he wound up limping to a 4.25 full-season ERA. Hinch surprised many observers by starting McCullers in Game 4 of the ALCS and was rewarded with the pitcher’s first quality start since June 8. When Hinch called for the righty out of the bullpen on Saturday, it was fair to wonder if the manager was pushing his luck.

But instead, McCullers dominated the Yankees once again. In four innings, he allowed only a hit and a walk while fanning six. Hinch left him on the mound with a 4-0 lead in the ninth and watched as he mowed down Didi Gregorius, Gary Sanchez and Bird in order.

And so the Astros head to the World Series for the first time in the American League and only the second time in franchise history. There, they’ll meet the Dodgers, another 100-win team with a lengthy drought and the star-power necessary to end it. Houston will seek to validate the famous 2014 Sports Illustrated cover that predicted the franchise would win the 2017 title, while delivering a needed pick-me-up for a city still recovering from Hurricane Harvey.

The Dodgers might enter the Series as favorites, but the Astros will not go away easily. With Justin Verlander (the ALCS MVP) and Dallas Keuchel atop the rotation and a fully awakened offense featuring Altuve, Carlos Correa, George Springer, Alex Bregman, Yuli Gurriel and others, Houston has fully earned its chance to play for a world title. The series begins Tuesday in Los Angeles. The Astros will be ready.