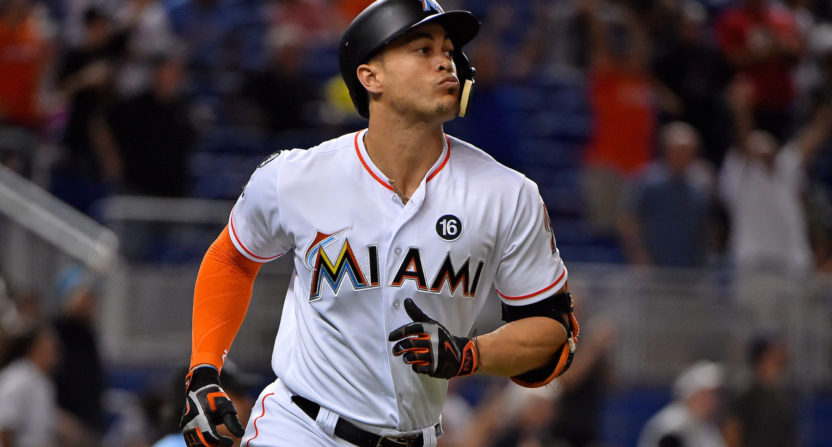 In fact, to find this kind of dynamic, in which a player seems to hold all power in determining where he’ll be traded, you have to look to the NBA.

Before we get to Paul George and Carmelo Anthony, let’s address Stanton, the reigning NL MVP whom the Miami Marlins are stubbornly determined to deal away. On Thursday night, Ken Rosenthal, writing for The Athletic, revealed that when it comes to his potential trade, “Stanton controls the process.” The Marlins have reportedly agreed to terms with the Giants and Cardinals, but since Stanton won’t consent, the team can’t pull the trigger. As Rosenthal sees it, Miami’s only option is to force a trade with a team Stanton wants to play for. According to SiriusXM’s Craig Mish, that list includes the Dodgers, Cubs, Yankees and Astros.

As of now, it seems that as much as the Marlins would like to force Stanton into accepting one of their deals, they have no ability to do so. Either Derek Jeter and company will find a match that works for Stanton or he and his massive contract will be back in Miami next year.

Typically, even players with no-trade clauses are not willing to leverage them this dramatically. Baseball players often submit lists of teams they’ll accept trades to and sometimes refuse to change teams altogether, but rarely do they force their teams into such a corner. More often, the players acquiesce or the teams hold onto him as they seek out an offer that will please everyone.

In the NBA, on the other hand, this happens all the time, to one extent or another. The most obvious recent example is Carmelo Anthony, who used his full no-trade to make the Knicks’ lives extremely difficult for the first half of last year. The organization knew it wanted to rebuild around Kristaps Porzingis and viewed Anthony as an impediment to that plan, but Carmelo essentially insisted he be dealt to the Rockets. Eventually, he added the Cavaliers and Thunder to his list and was subsequently sent to Oklahoma City, more or less getting his way.

Even NBA players who don’t have no-trade clauses can easily force the hand of teams looking to trade them. Paul George handcuffed the Pacers by announcing that he would become a free agent after the 2017-18 season and would likely sign with the Lakers. The proclamation increased his odds of winding up in L.A. but also eliminated any leverage Indiana had in trade talks. George didn’t fully get his wish, as he was dealt to Oklahoma City as well, but he did wind up in a cushy situation next to two All-Stars.

We could spend all day recounting the shrewd ways NBA superstars, who know they’re the lifeblood of any title contender, use their power to bend teams to their will. From LeBron James forcing the Cavaliers to sign who he wants them to sign, to Dwight Howard (back in the day) demanding Orlando trade him when the team didn’t particularly want to, NBA players know the power they have and aren’t afraid to wield it.

It takes a near-perfect storm for a baseball player to enjoy that same kind of leverage. In order to control the trade process, a player basically must have a full no-trade clause, or else his team can find a partner not on his list (Jonathan Lucroy tried this with a partial no-trade clause, and it didn’t work). He must be a superstar, or else teams won’t put up with his shenanigans. And his current franchise must be dead-set on dealing him, or else they will just hold onto him until later. Stanton checks all three boxes, giving him near-unprecedented ability to manage his future.

Some observers are already blaming Stanton for exerting such control over his trade process, but it’s damn hard to blame him. The Marlins signed him to a massive contract, assuring him they wouldn’t jettison him the way they have so many stars in the past. Stanton, who clearly enjoyed living and playing in Miami, negotiated a no-trade clause to hold the team to its word. Now, under new ownership, the Marlins are running him out of town, and he’s understandably unhappy about it. He wants a say in where he spends the next stage of his career, and thanks to that no-trade clause and his willingness to use it, he’s certainly getting one.

The special circumstances of Stanton’s case mean we won’t see many other players pull off this hostage act in the near future. But even so, Stanton’s bold stance (especially if he gets his way) could encourage baseball players to think a little more like basketball players when it comes to trades.