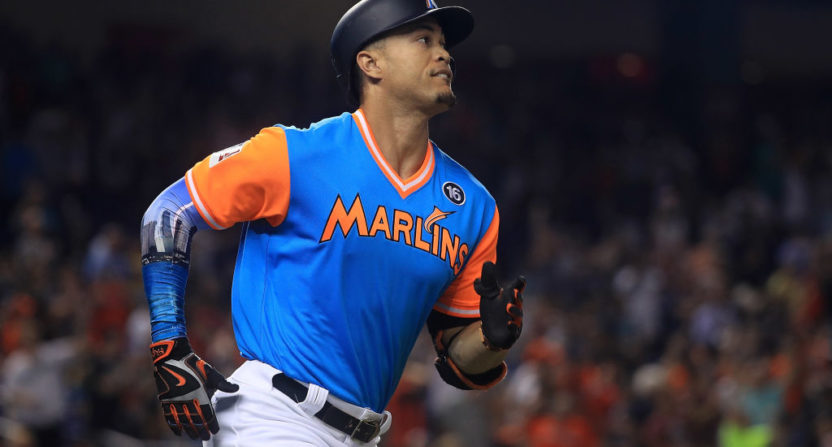 While the Derek Jeter-led Miami Marlins began their firesale by trading away Dee Gordon on Thursday, a Giancarlo Stanton trade still doesn’t appear to be close. And that’s certainly understandable if this report on Thursday night from Sirius XM’s Craig Mish is correct.

Mish is hearing that Stanton would only approve a trade to four teams: the Los Angeles Dodgers, Chicago Cubs, New York Yankees, and Houston Astros.

What’s very notable is that none of those teams are the St. Louis Cardinals or San Francisco Giants, the two teams that have been trying the hardest to acquire Stanton.

Cardinals and Giants not on Stanton's approval. Unclear if either or both teams have been told anything to this point.

The Marlins have even agreed to trades with both teams, but they would need Stanton’s approval to make a trade official, and it doesn’t seem he’s going to make that happen (at least at the moment).

The Athletic’s Ken Rosenthal also reported on Thursday night that Stanton “does not want the San Francisco Giants or St. Louis Cardinals,” but Stanton’s thinking is “fluid,” so perhaps he will change his mind. However, Rosenthal adds that the Cardinals and Giants are “growing impatient.” The Winter Meetings begin on Sunday, and these teams would ideally like to have things figured out on the Stanton front before they attack the offseason’s most active five days.

In recent days, multiple major league sources have told The Athletic that Stanton does not want the San Francisco Giants or St. Louis Cardinals, the two teams that have reached trade agreements with the Marlins, pending the player’s approval.

Stanton’s thinking is fluid, other sources say—he does not deal in absolutes. Perhaps the Giants could sway him if they landed Japanese two-way star Shohei Ohtani. Perhaps the Cardinals could build their own convincing case by trading for Rays closer Alex Colome and third baseman Evan Longoria.

Both teams, though, likely are growing impatient.

It’s been long rumored that Stanton, who is from Southern California, would like to be on the Dodgers (the rest of the NL definitely doesn’t want that to happen). But the slugger is owed $295 million over the next 10 years, and the Dodgers already have luxury tax concerns; it’s why they didn’t trade for Justin Verlander at the trade deadline, for example. Ultimately, he has the power to force a trade there if the Marlins are really that hellbent on trading him, and perhaps they would take on more of the contract than they would like to, or the Dodgers could throw in some high-salary veterans. Whatever the case, a trade with the Dodgers is not a deal the Marlins want to make. They’re trying to get rid of this salary and acquire top prospects at the same time.

The other destinations Stanton would approve seem even more unlikely.

It’s doubtful that Theo Epstein is a fan of Stanton’s deal that figures to get ugly on the back half, and the Cubs likely want to leave money open to make a run at Bryce Harper next offseason (Harper is younger than Stanton and his game figures to age better, particuarly on defense). They also may still need to sign another starting pitcher (after already giving Tyler Chatwood a three-year, $38 million deal on Thursday) and multiple good relievers in free agency.

The Yankees have luxury tax concerns, and they may also want to make a run at Bryce Harper (or Manny Machado) next offseason. And the Astros just won the World Series and are currently projected to win 97 games in 2018 with their roster at the moment, so why get desperate and take on this contract if you don’t at all have to?

There are many hot takes on social media ripping Stanton for being so specific with his demands and not allowing a trade to the Cardinals or Giants, but that’s his right. Blame the front office that for some foolish reason gave Stanton a no-trade clause over a 13-year, $325 million deal. That’s not his fault, and he gets a say on where he wants to spend his next 10 years. He didn’t sign a 13-year deal with the Cardinals or Giants. He wanted to be in Miami, and they’re now trying to make him go somewhere else.