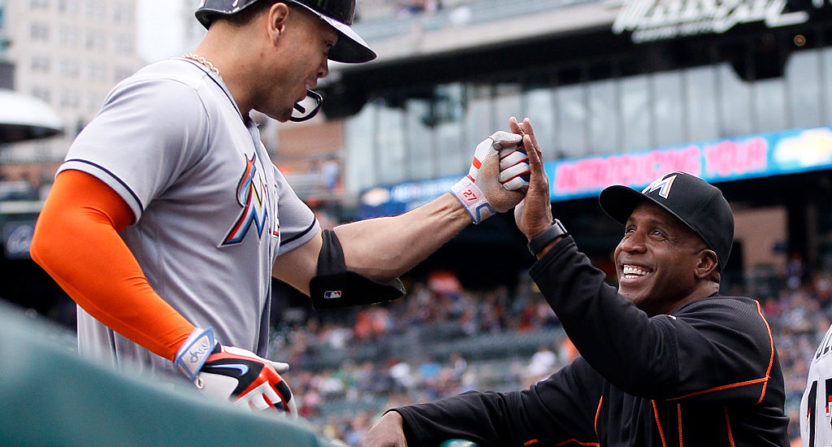 On Tuesday, Stanton tied the MLB record for home runs in August (18), and he has an OPS above 1.400 this month.

From the Miami Herald:

“Barry’s been huge for me,” Stanton said. “We talk all the time. He’s guided me along this year.”

Stanton said Bonds tells him “you’re going to get less pitches to hit, you’ve got to be ready for them, stuff like that.”

“He likes it,” Stanton said. “He’s telling me to stay the course and make sure I’m ready to go every day.”

Stanton came ready to play in Tuesday’s game against the Washington Nationals. In the first inning, he went yard for his 51st homer of the year.

That was also his 18th of August, tying a MLB record. And believe it or not, that only scratches the surface of crazy home run stats and trivia regarding Stanton’s dominant second half of the season.

He’s hit more home runs in the last 48 games than all but 16 other players have hit all season.

#Marlins Giancarlo Stanton has hit 30 home runs in 48 games beginning July 5. Only 16 other players in #MLB have hit 30 ALL SEASON.

And if he keeps this up, he could become the first player in 84 years to win the MLB home run title by at least 14 deep balls, joining the exclusive company of Jimmie Foxx and Babe Ruth.

Giancarlo Stanton 14 HR ahead of Aaron Judge for MLB lead (51 to 37)
Here are all the times MLB leader had 14+ more than next player pic.twitter.com/b6Z5RHahtj

Stanton’s domination has teammates like Ichiro Suzuki comparing his performances to video games:

“When I was in elementary school when Nintendo came out, there was a baseball game,” Suzuki said through his translator. “And at first, there was only Japanese teams. But then the new edition came out with major-league teams they would only hit home runs. And that’s what we’re witnessing now, is that game. It’s like a Nintendo game [with Stanton].”

And San Diego Padres bench coach Mark McGwire, who once held the single-season record with 70 home runs, has been very impressed:

“He’s in it, man. He’s in the zone,” McGwire said after Stanton blasted three homers — including his 50th — in the Marlins’ three-game series sweep of the Padres.

“There’s only a few guys that have played this game that know what that feeling is, and I can attest to it,” said McGwire, who hit 70 home tuns in 1998 and 65 in 1999. “It’s a great feeling, really a great feeling. He’s a very intimidating figure at the plate right now, especially for the guy on the mound.”

Not too long ago, many baseball fans wondered if New York Yankees rookie Aaron Judge had surpassed Giancarlo Stanton as the MLB’s new home run king. Now Stanton is knocking on the door of 60 home runs, something we are to believe no one has accomplished without PEDs since Maris in 1961. Stanton also has the Marlins in the thick of the NL Wild Card race, and it would be great for MLB if Miami can finish off this miracle comeback. It’s about time we got Stanton and Mike Trout in the playoffs together.