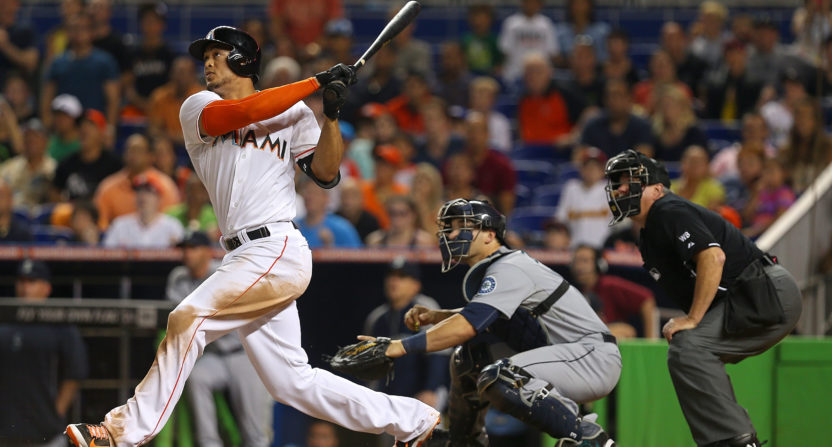 With Derek Jeter and the Miami Marlins looking to cut payroll, likely NL MVP Giancarlo Stanton is readily available on the trade market, fresh off a 59-home run season. And although Stanton still has 10 years and $295 million (barring an opt-out) left on his contract and the Marlins are reportedly asking the world for their slugger, it seems likely Giancarlo will be traded by Opening Day.

So where will he wind up? Rumors have him landing with the Giants, Dodgers, Cardinals, Red Sox, Astros and more, and it’s hard to imagine a team that couldn’t find room for a 50-home-run hitter for the right price. We asked our writers for their best guess at Stanton’s eventual destination. Here are their answers:

What uniform will Giancarlo Stanton wear on Opening Day?

Andrew Bucholtz: I think the most logical places for Stanton are the Dodgers and the Giants, and which one is going to depend on how much the Dodgers want him. Stanton’s a Los Angeles native and has suggested he’s not particularly interested in places like St. Louis or Boston, and his no-trade clause gives him a fair bit of power. L.A. and (to a lesser degree) San Francisco seem like places he would want to be from a geography perspective, and the reigning NL champion Dodgers would also fulfill his goal of being traded to a contender.

But while he’d make the Dodgers better and they seem somewhat interested, they may not be desperate to land him given their current success and deep outfield roster. If they really want Stanton and offer a competitive package in terms of high-quality prospects/low cash considerations from the Marlins, I think the Dodgers get him, but if their bid is below market, the Giants might be more desperate and more poised to cash in.

Yes, the Giants were awful this year, and that’s concerning for a guy who wants out of Miami to avoid a rebuild, but San Francisco can’t go full rebuild with all the long-term deals they have, and they have strong incentive to try and turn things around now. There’s also at least some hope that things will be better next year, especially with Madison Bumgarner healthy. Ownership there is eager for a winner after this season, and they have the fiscal resources to make major moves; I expect them to try and add at least one big name, and Stanton might be it. If the Dodgers make a decent offer, I think that’s where Stanton will wind up, but if not, the Giants might be the second-best option given the combination of location, situation, and team desperation.

Ian Casselberry:  This could be a moot point if Stanton doesn’t amend his no-trade clause, but I see him in a St. Louis Cardinals uniform next season. The Cards really need some thunder in the middle of their batting order and jolt to their roster. No one would provide both of those better. (Though Jose Abreu might fit into their lineup more easily and cost less.)

Most importantly, they have the prospects that could meet the Marlins’ demands and could justify the cost with at least three years of Stanton finishing out his prime. Pitching prospects like Alex Reyes, Luke Weaver and Jack Flaherty would almost certainly be a centerpiece of the deal, along with hitters such as Tyler O’Neill and Harrison Bader. Stephen Piscotty or Randal Grichuk could also be a major-league ready piece to include, one who could take over for Stanton in right field.

Alex Putterman: As fun as it is to imagine Stanton in all these different cities, I think he’ll wind up stuck in Miami. Yes, the Marlins desperately want to cut payroll and offload their star, but there are a whole lot of factors working against them getting a deal done. Factors such as…

Miami certainly could overcome those hurdles to move Stanton to a contender, but it won’t be easy.

Matt Clapp:  I think it all lines up to being the Giants.They’ve been known to be one of the favorites to land Stanton for a while now, and reports have been that he’d prefer to be on the West Coast (he’s from California). And as a former front office executive recently said, Stanton “is running the show” with this decision; he has full no-trade power.

The Cardinals are likely the more preferred trade partner for the Marlins due to a few highly regarded young pitchers (Alex Reyes, Luke Weaver, Jack Flaherty, etc) St. Louis can offer, but there’s a good chance Stanton would pass on spending his next 10 years in St. Louis. The Giants are coming off a miserable season, but there’s reason to believe they could quickly be competitive again (They were every bit as unlucky as they were bad in 2017), and Stanton would obviously help accelerate that.

Joe Lucia:  I think he’s gonna remain a Marlin on Opening Day. Trading him has been such a tortuous process for Miami, and with the team (rightfully) set on bringing back a massive package of prospects and dumping his whole contract, I don’t think they’ll be able to get a deal done that ticks both of those boxes.