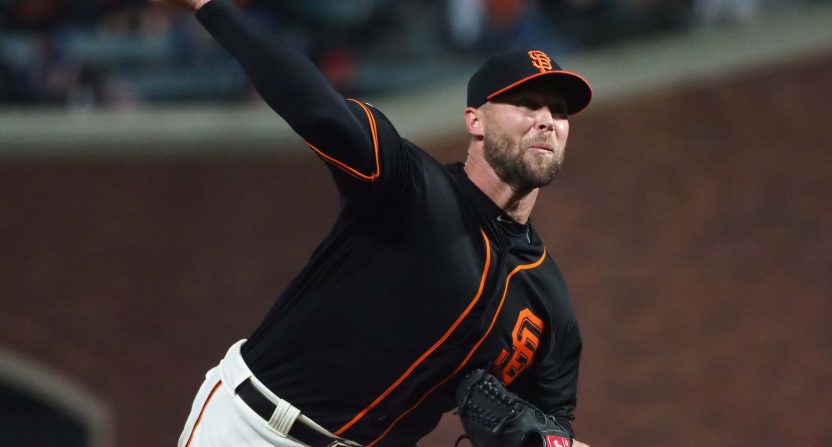 Giants closer Hunter Strickland had a bad night Monday, allowing three hits, two walks and three runs, blowing a save and taking the loss against the Marlins. But it didn’t have to be more than that. Strickland could have simply shaken off the rough outing, prepared himself for the next one and put the defeat behind him.

Instead, the 29-year-old went and punched a wall with his pitching hand after being pulled from the game and will now have six-to-eight weeks to think about what a silly decision that was.

Hunter Strickland punched a door after coming out of game last night. He fractured his pitching hand and is having surgery. Out at least six to eight weeks.

Strickland, of course, is far from the first athlete to hurt himself while expressing frustration. In fact, he’s not even the first to do so this month, after LeBron James pulled the same move following Game 1 of the NBA Finals. But while superhuman LeBron recovered enough to play the very next game and the rest of the series, Strickland will apparently be out for quite a while.

For those who have followed Strickland’s career, it’s not exactly shocking that he would melt down like he apparently did Monday. The reliever’s most memorable major-league moment came when he threw at Bryce Harper last spring as retribution for Harper homering off him three years earlier, inciting a messy brawl. His short fuse was on display again Monday night (even before he got back to the clubhouse), when he started jawing with Marlins centerfielder Lewis Brinson, who had knocked the game-tying hit minutes earlier.

Strickland’s injury comes with consequences not only for him but for his team as well. The veteran had been pitching well out of the closer’s role before Monday night and even after that rough outing maintained a solid 2.84 ERA and 3.31 FIP. Now, the Giants will have to make due with some combination of Tony Watson and Sam Dyson, as they scramble to stay alive in the NL wild-card hunt.