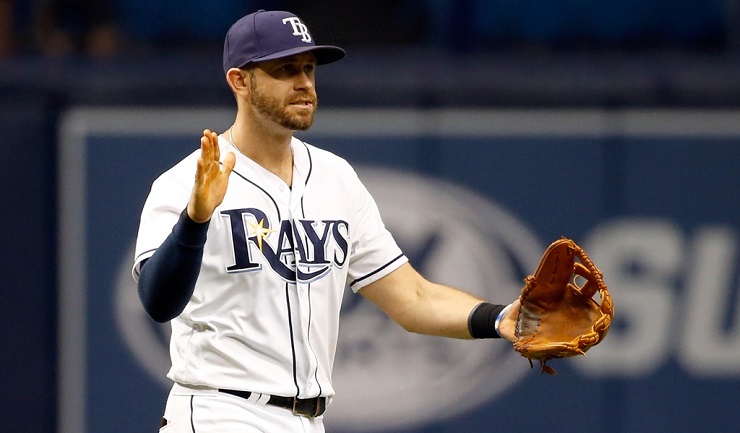 For years, Evan Longoria has been the face of the Tampa Bay Rays. Those days are now officially over as the Rays have traded Longoria to the San Francisco Giants. With rumors coming to a boil in recent days, the deal finally went down on Wednesday. Marc Topkin of the Tampa Bay Times was among the first to report the news of the deal, via Twitter.

As MLB.com’s Mark Feinsand points out, the Rays had to trade Longoria during this offseaason if they were ever going to deal him. Once the 2018 season began, he would earn “10-and-five” rights (10 years in MLB, five with the same team) that would have allowed him to veto any trade.

The addition of Longoria in San Francisco is a slight gamble for the Giants. Longoria’s production at the plate has taken a dip during the past few seasons, but he is still a good hitter with power coming off a Gold Glove season in 2017.

Last season, San Francisco compiled the worst production at third base among all major league teams. Collectively at the position, the Giants hit .216 with a .568 OPS and just nine home runs. Longoria is obviously a huge upgrade there. Even with one of his worst offensive seasons last year, he still batted .261 with a .737 OPS, 36 doubles and 20 home runs. The 10-year MLB veteran will also greatly improve the team’s defense at third base. He was credited with 11 Defensive Runs Saved last season and according to FanGraphs‘ Ultimate Zone Rating, he saved three runs more than an average player at the position. Those weren’t even the best numbers of his career, Gold Glove aside.

Longoria is also durable, playing in no fewer than 156 games in each of the past five seasons. At the age of 32, there should be concern about his skills declining and he can’t just move to designated hitter in the National League. But he’s a year removed from one of his best seasons (hitting .273 with an .840 OPS and 36 homers) and though he’s going to a last-place team which won 16 fewer games than the Rays last season, the ol’ change of scenery could revitalize him.

The Giants are on the hook for the remaining five years on Longoria’s contract worth $81 million, along with a $5 million buyout (or $13 million club option) for 2023. That’s a lot of money for a player on the wrong side of 30, though he should still provide plenty of production. As FanRag Sports’ Jon Heyman points out, money likely wasn’t an obstacle for the Giants, who were willing to take on Giancarlo Stanton’s contract in trade.

Well, maybe money was a bit of a concern. To make the deal work, the Giants needed the Rays to take a player with a higher salary. So Denard Span is going to Tampa Bay in exchange. The outfielder is owed at least $13 million next season (including a $4 million buyout for 2019). Depending on how the Rays perform next season in a top-heavy AL East, Span is a piece that could be flipped to a contender in need of outfield help at the trade deadline.

Also going to the Rays with Span are infielder Christian Arroyo, who had a 34-game stint with the Giants from late April to early June (essentially taking Hunter Pence’s spot on the roster while he was on the DL). He wasn’t terribly impressive during that time, batting .192 with a .548 OPS. But the 22-year-old was fantastic in Triple-A compiling a .380 batting average and 1.026 OPS. A first-round pick for San Francisco in 2013, Arroyo was the team’s No. 1 prospect and can play both shortstop and third base. Tampa Bay already has a top prospect at shortstop in Willy Adames, however, which probably means Arroyo’s future is at third base. Unless he or Matt Duffy moves to second base. Duffy could be also be a trade piece with three more years of club control.

Minor league pitchers Matt Krook (105 strikeouts in 91.1 innings at advanced Class A last season) and Stephen Woods (113 Ks in 110 innings at low Class A) are also heading to Tampa Ray as part of the deal, providing the Rays with two promising young arms.

Neither team is apparently done trading or adding players. According to USA Today‘s Bob Nightengale, the Rays are still looking to trade closer Alex Colome and are open to any offers for ace starter Chris Archer. Meanwhile, the Giants are interested in free agent outfielders Jay Bruce and Lorenzo Cain, or perhaps a trade for the Pirates’ Andrew McCutchen.