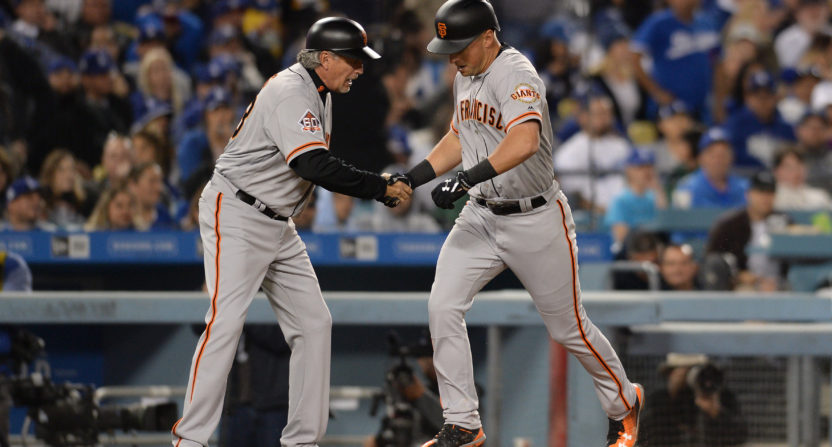 On Thursday, the San Francisco Giants took down the Los Angeles Dodgers 1-0 on Opening Day. The Giants’ only run came on this Joe Panik home run against baseball’s best pitcher, Clayton Kershaw.

And on Friday night, the Giants again went into Dodger Stadium and knocked off the Dodgers, with the score again being 1-0. And again, the only run came on a Joe Panik homer. This time Panik hit the homer against arguably baseball’s best closer (he was last year), Kenley Jansen.

So the Giants have won both games 1-0, on solo homers from Joe Panik, against superstar pitchers.

The Giants and Joe Panik just became the first team ever in MLB history to win consecutive 1-0 games with the same guy hitting a home run. Via STATS Inc.

It’s even a bigger deal when you consider both games were against the team that’s been the champion of the Giants’ division for five straight years, and the Giants are trying to hang in there while pitchers Madison Bumgarner and Jeff Samardzija are out with injuries.

Panik — now in his fifth MLB season — entered 2018 with 29 homers in 1,818 plate appearances. The second baseman has been a rock-solid MLB player (particularly known for his exceptional contact skills), but power hasn’t exactly been his game. And yet he’s already hit two hugely important homers this season, against two pitchers that few hitters take deep. Perhaps Panik should consider pulling a George Costanza and leave on a high note.

Or maybe Panik will just keep this up and win NL MVP! Who knows in this wacky sport.