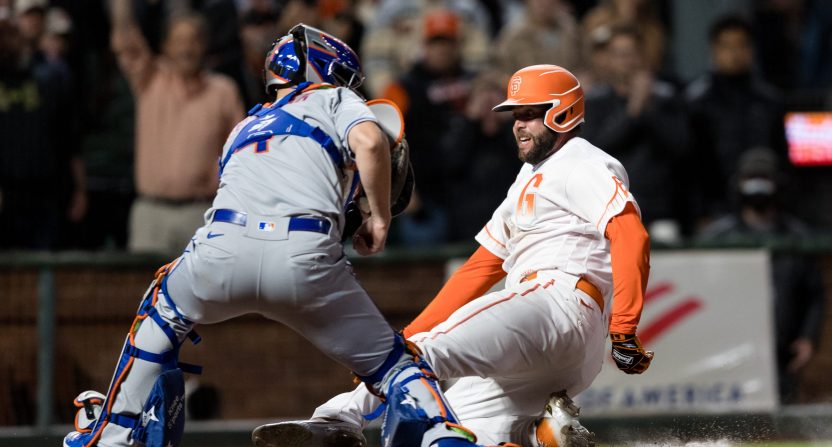 It’s only May, but it will be really hard to top Tuesday night’s game between the New York Mets and San Francisco Giants in the 2022 MLB season.

The game featured wild comebacks for each side, with the Giants ultimately coming out on top 13-12 at Oracle Park.

San Francisco led the game 8-2 entering the seventh inning. New York scored twice in the seventh to make it a four-run game, and then the Mets’ offense really went bonkers in the top of the eighth.

The Mets scored seven runs in the eighth inning to take an 11-8 lead. Giants left fielder Joc Pederson misplayed a Francisco Lindor groundball down the line that cleared the bases — giving New York a 10-8 lead — and allowed Lindor to reach third. Lindor then came around to score on a Pete Alonso sacrifice fly.

It's been a nightmare 8th inning for the Giants.

This wacky play gave the Mets the lead: pic.twitter.com/E53FWz0Lnv

But Pederson redeemed himself in the bottom half of the inning by crushing a three-run homer with two outs to tie the game 11-11. This was Pederson’s third dinger of the game, making him the first Giants player since Barry Bonds in 1994 to go deep three times in a home game:

Joc Pederson is the first Giants player with a 3-HR game at home since Barry Bonds in 1994. pic.twitter.com/lGbsrHbXD1

Joc Pederson credited a long pregame talk with Barry Bonds for allowing him to keep his focus locked on every pitch tonight. He said it was the best talk about hitting he’s ever had.

In the top of the ninth, the Mets got the lead back with a Brandon Nimmo sacrifice fly to make it 12-11.

The Giants got a leadoff single in the bottom of the ninth, but that baserunner was erased in the next at-bat when Mets closer Edwin Diaz got Tommy La Stella to ground into a double play.

That felt like it may finally end the game for all intents and purposes. But then Mike Yastrzemski walked and Darin Ruf singled, bringing Pederson back to the plate with two outs.

Pederson didn’t homer for the fourth time, but he still tied the game 12-12 with an RBI single, good for his eighth RBI of the game.

And then Brandon Crawford singled to give the Giants an absolutely insane 13-12 walk-off victory.

Joc Pederson singled to tie it in the 9th for his *8th* RBI of the game.

And Brandon Crawford walked it off with an RBI single.

Here are those hits: pic.twitter.com/0CsIZoA147

The Mets had never lost a game in franchise history when they scored at least 12 runs, until Tuesday night.

The Mets 12 runs scored were their most in a loss in franchise history. pic.twitter.com/64UHqueIK4

The Giants (23-19) entered Tuesday on a five-game losing streak, so this would’ve been an extremely demoralizing loss. Instead, it’s an incredible win and will give the team a huge mental boost.

It’s crazy that the Mets (29-16) even came back to create the late-inning drama, even though they’re surely frustrated about not finishing it off with a victory. But, it’s hard to be too upset about things when you have an eight-game lead in May as the Mets do in the NL East.