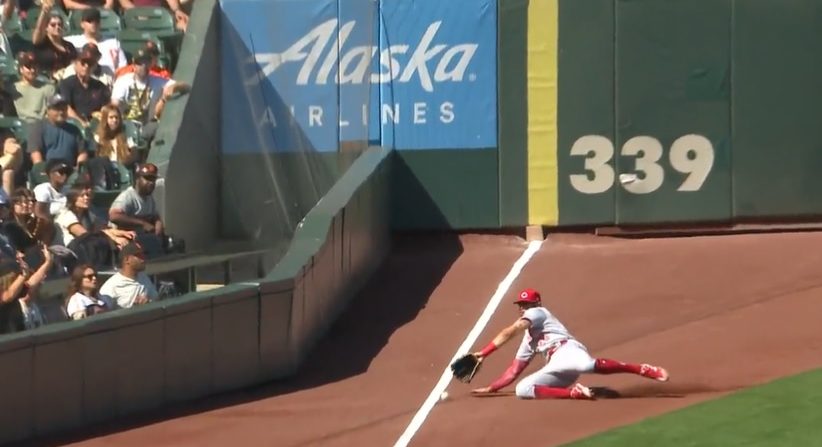 Saturday’s game between the Cincinnati Reds and San Francisco Giants gave us another controversy with Tommy Pham and Joc Pederson playing prominent roles — just not in the way anyone expected.

In the bottom of the first inning, Pederson came to the plate with one out and Austin Slater on first base. He hit a high fly ball into medium-deep left field, right on the line. Pham, the left fielder, sprinted over to try to catch the ball narrowly missed it on a dive.

It was initially ruled foul, but overturned to a single for Joc. pic.twitter.com/xXM0n5Tukg

Two controversies came out of this play.

One, while the ball landed in fair territory and Pham’s slide did nothing to impede third base umpire Andy Fletcher’s view of the play, it was ruled foul. The Giants challenged and won.

Two, the overturned call was only a partial victory for San Francisco. The review did determine that the ball was fair. But instead of the seemingly obvious decision of putting Pederson on second base and Slater on third, Slater was given third base while Pederson was on first. That decision loomed large when the next hitter, Darin Ruf, grounded into an inning-ending double play.

The decision to put Pederson on first got a big reaction from baseball fans.

Horrible call to put Pederson at first. Would have been an easy double. Zero common sense. MLB still hasn’t figured out replay and this is its ninth year.

Umps send Pederson back to first. Not sure the rule on that one. He'd almost surely be safe for a double, if not advancing there on a throw. First and third for Ruf…

horrendous foul ball call by third base umpire on Joc Pederson's oppo hit down LF line, cost Giants possible big inning. After Pederson was sent back to 1B, Giants should have protested game. Could have made that call for half that ump's salary. @sportslarryk @knbrmurph @sfgiants

How was Pederson not allowed to be at second base on the botched call by the umpire resulting in an inning ending double play? Terrible decision by New York. Seriously a bad call all the way around 🤦🏽🤦🏽🤦🏽 #togetherwearegiant

Fletcher missing the call is one thing. Yes, he had a clean look at the play but it was also from several feet away. And while Pham’s slide didn’t block his view of the ball, all of the activity might have diverted his attention for a fraction of a second. That can happen. We’ve seen more blatant misses this season. Heck, we saw a more blatant miss with Angel Hernandez earlier on Saturday. But at least Hernandez’s mistake was corrected by review. This mistake was exacerbated by review.

If people want to know why fans are more frustrated with MLB umpires than ever before, they needn’t look any further than situations like this.