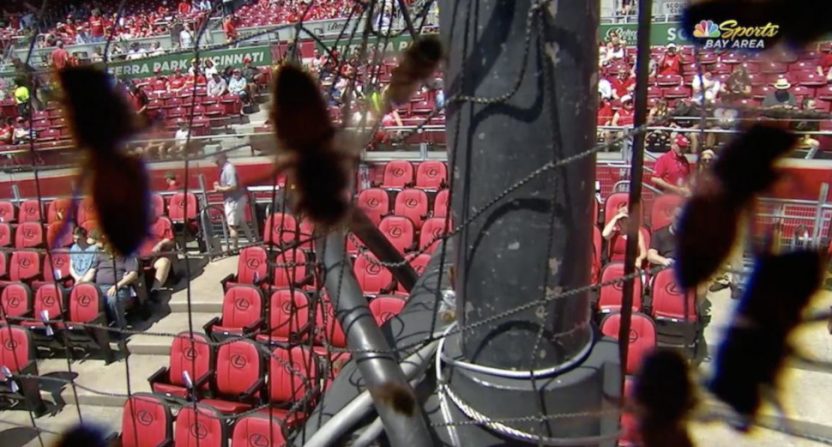 The San Francisco Giants’ day game Monday against the Cincinnati Reds likely won’t have any impact on this year’s division races or postseason, as both teams are only 15-20 following the Reds’ 12-4 win. But that game may wind up being one of the strangest we see all year across Major League Baseball. For one thing, it started with an 18-minute delay thanks to swarming bees:

The Giants-Reds game is currently under delay due to BEES 🐝 pic.twitter.com/3tYKKFdCE9

So the @Reds game is in a delay because of….a swarm of bees. pic.twitter.com/G6JW16OmfK

Here’s a terrifying shot of bees on a camera lens:

The kind of stuff nightmares are made of 🐝 pic.twitter.com/AMNKMTJGTr

Bee delays have happened in MLB before, but mostly in spring training or the minors, with only a few recent ones in the major leagues proper. The bees were eventually cleared and the game got underway, but not before Reds’ second baseman Derek Dietrich dressed as an exterminator to “help”:

And the strangeness didn’t stop there. The Reds put together a five-run first inning, and things then got real bad for the Giants. Consider what John Shea of The San Francisco Chronicle wrote about the hit batters:

The Giants tied a major-league record by hitting four batters in the sixth inning. The record was set in 1893.

• Things got so out of hand that infielder Pablo Sandoval pitched the eighth inning. And hit his first batter, meaning the Giants hit five batters in a game for the first time in recorded history (since 1908).

But that wasn’t the only odd part of this game Sandoval was involved in. Despite hitting that batter, he finished that inning without allowing a run, thanks to a nice double play here:

This was the second time Sandoval had pitched a scoreless inning for the Giants (the first was last April), putting him in illustrious company:

Pablo Sandoval is now on a list of Giants legends with at least two innings pitched and a 0.00 ERA, joining Heath Hembree, Matty Alou, and High Pockets Kelly. https://t.co/FqweBnwiAk

I missed that this list contains a pitcher named Mul Holland, and upon further review, I have decided not to believe it. https://t.co/CI3EG0dLiW

Even more remarkable than that was Sandoval, not exactly known for his speed, stealing a base.

Pablo Sandoval stole a base today for the #Giants.

It's his first stolen base since 2012, when his Giants teammates included Barry Zito and Brad Penny, Omar Vizquel was still an active MLB player, and Game of Thrones had just finished its second season https://t.co/s7PP3JQfDA

Remember what we said on the #06010MLB today about Derek Dietrich and least likely Combo Meals? Well, Pablo Sandoval entered today with the second-longest active streak of games without a stolen base (630)! https://t.co/lnmaH9pCOW

That, plus an earlier home run, put Sandoval in rare company too:

Before Pablo Sandoval today, the last player to pitch in a game and hit a home run and steal a base was Mudcat Grant on May 7th, 1964.

And it wasn’t even the first time he’d combined a home run and a stolen base!

This is Pablo Sandoval's 4th career game with a homer and a stolen base.

At any rate, that all made for an exceptionally weird game. And one we probably won’t see the exact likes of again.

[The San Francisco Chronicle; photo from Zack Seward on Twitter]