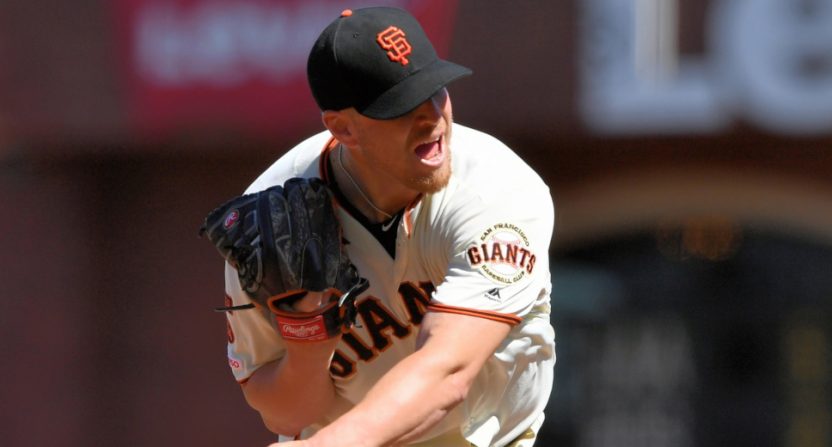 Will Smith is in the middle of his seventh season in Major League Baseball, but the Giants’ reliever did several things he’d never done before in the majors Sunday. With two outs and runners on second and third in the bottom of the eighth inning against the Philadelphia Phillies, Smith (seen above on the mound in Saturday’s game) received his first-ever MLB plate appearance, and he promptly made good on it, hitting a single down the right field line that scored both runners:

Of course, it makes some sense that Smith hasn’t received a chance to hit before now. While he entered the majors as a starter back in 2012, that was with the American League’s Kansas City Royals, so the designated hitter rule contributed to him not getting a plate appearance there. (He could have batted there if he’d been the starting pitcher in an interleague game in a National League park, but that didn’t happen.) And while the majority of Smith’s career has been in the NL (with the Milwaukee Brewers from 2014-16 and then the Giants from 2017-present), he’s mostly been used as a reliever, with his last start coming for the Royals in 2013. With managers usually pinch-hitting for relievers, Smith never got the chance to step up to the plate in a major-league game until now.

And Smith only got the chance to hit Sunday because of what else happened in this game. San Francisco starter Conner Menez only lasted one and two-thirds innings, allowing three earned runs in the second before being pulled, and the team wound up using eight different pitchers. So by the time they got to Smith in the eighth inning for an attempted five-out save, there weren’t a lot of options left. And while Smith wound up conceding an eighth-inning run (which tied the score at 6) and picking up a blown save in the process, he wound up with the win thanks to Kevin Pillar’s go-ahead triple and then his own two-RBI single, and thanks to his side-retiring performance in the ninth, giving the Giants a 9-6 victory. But it was Smith’s hitting that was really unique, and it led to a memorable night for him.