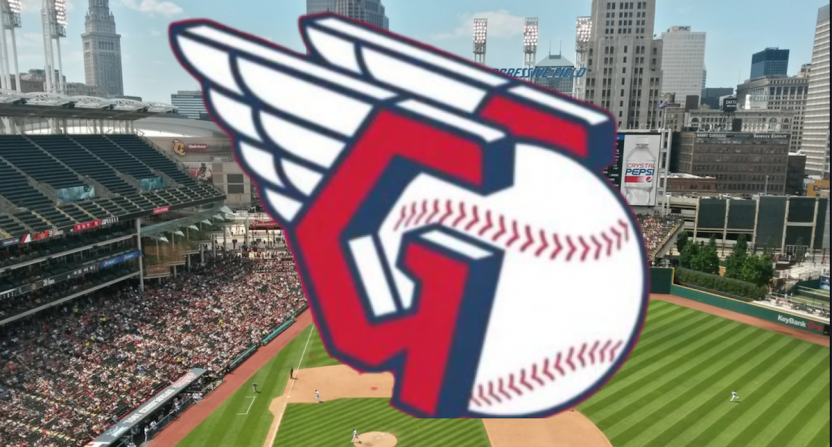 After 106 years, Cleveland’s Major League Baseball team has a new name. Following the 2021 MLB season, the Indians will be known as the Guardians. The team announced the name change on Friday morning with a Twitter video.

Together, we are all… pic.twitter.com/R5FnT4kv1I

Perhaps hoping to calm down any objections, the announcement was narrated by Tom Hanks. Never mind that he has no apparent connection to Cleveland or its baseball team. Who can get mad at Tom Hanks?

[Correction: Commenter “salmon dave” pointed out that Hanks spent much of his early theater career in Cleveland, interning and spending three years with the Great Lakes Theater Festival. He was also awarded Best Actor honors by the Cleveland Critics Circle for his performance in Shakespeare’s The Two Gentlemen of Verona. So Hanks does indeed have a connection to the city and was a good representative for the Guardians’ announcement video.]

“There’s always been Cleveland, that’s the best part of our name,” said Hanks, narrating views of the city and its fans. “And now it’s time to unite as one family, one community, to build the next era for this team and this city. To keep watch and guard what makes this game the greatest. To come together and welcome all who want to join us.”

The name will go into effect after the 2021 season. pic.twitter.com/ggCFyIRD2y

So one way of looking at this is that the Indians replaced four letters in their name, going from “in” to “guar” in preceding “-dians.” That could be efficient and convenient for fans getting creative with masking tape and markers or patches to sew on.

“Guardians” is a perfectly safe name. It connotes power and authority, the defense of a city and its game. Maybe it makes some of you think of Chris Pratt, Dave Bautista, and Groot.

Yet as hard as that hype video tried, the new name doesn’t exactly convey regional identity. Though the Indians and some Cleveland citizens might point out that the new name was inspired by the “Guardians of Traffic” on the city’s Hope Memorial Bridge.

“Flanking either end of the Hope Memorial Bridge from both sides, are 4 towering pylons. Each pylon bears a massive statue on each side representing a “Guardian of Traffic.” These winged Art Deco figures wear either winged helmets or winged laurel crowns. Each figure holds a different ground vehicle: a hay wagon, covered wagon, stage coach, passenger car, dump truck, concrete mixer, and two other trucks. The progression of vehicles from hay wagon to semi truck symbolizes the evolution of transport, and the breadth of their protection. They have stood on either side of the bridge protecting all who pass between them since the early 30s.“ 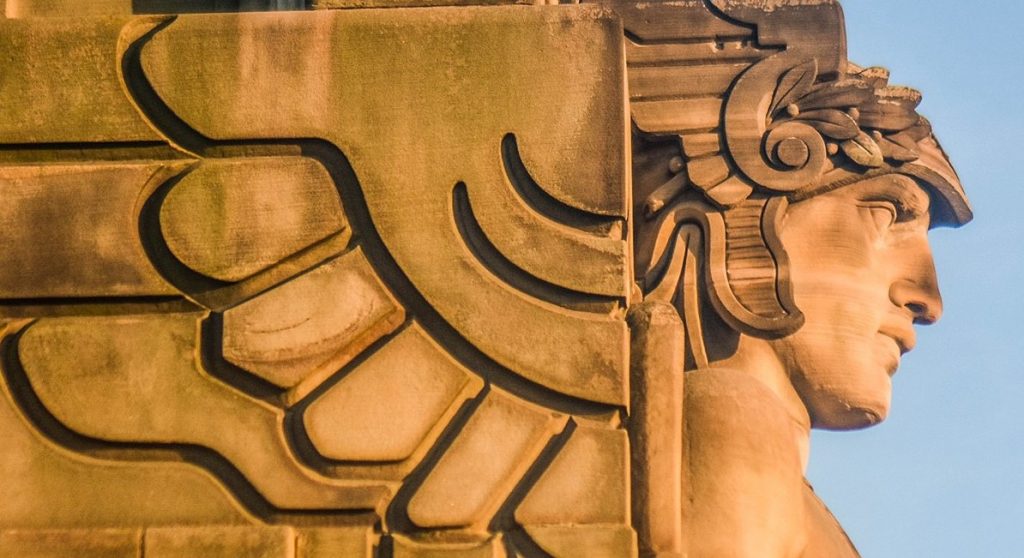 The face of those Art Deco statues would look pretty cool on a baseball cap. Maybe the team will go in that direction for an alternate cap. Based on the announcement, the team could stay with a “C” on the cap or a “G” with wings on either side. (Although a logo with wings resembles the Angels’ look from 1997 to 2001. If the new logo was meant to invoke memories of Tim Salmon… mission accomplished?)

New Era has been doing a bang-up job with goofy caps lately. How about a model with wings or embroidered on each side or a winged laurel crown near the top of the cap? The aforementioned hay wagons, covered wagons, stage coaches, dump trucks, and concrete mixers invoked by the Guardians statues create plenty of options for caps, t-shirts, and maybe a line of toys. This could be a merchandising bonanza for the team.

Unfortunately, “Guardians” is not particularly distinct. Nor does it really sound like a baseball club. You might expect “Guardians” to be the name of a new XFL team. There were so many other possibilities — like “Rocks,” “Naps,” “Steamers” (until looking that one up on Google), and the apparent favorite, “Spiders” — which has led to some initial disappointment.

The Guardians logo looks well done and I think the name is solid, but I'm mourning all of the incredible uniform and logo designs that could've come from Cleveland changing their name to the Spiders

But we should probably all give the name some time. Regardless of what the new name would be, it was going to feel like a jolt because it’s so new. And it’s always easy to poke fun at something different and new when it’s first revealed.

The important thing, as the hype video with Hanks’s voiceover alluded to, was that the Cleveland baseball team’s new name should no longer divide fans. It won’t cause discomfort or derision, making people wince when saying it. “Guardians” won’t be a name the organization has to be ashamed of, hiding it from caps and apparel.

it’s a lot cooler when you dig deeper on the history of the city #Guardians pic.twitter.com/2hWhzQqseU

Reminder that the movie Major League's opening shot is of one of the "Guardians of Traffic" statues 😎 pic.twitter.com/LzCgIPO6mQ

Don't act like there's some perfect word that all you Mad Dad Cleveland fans would have been happy about. You'll be fine. Everything's fine. Go Guardians. #MadDads

Oh, and by the way, let’s give some credit to Kyle Herman, who wrote a year ago that the Indians should change their name to Guardians.

Maybe the name — chosen from among 1,200 proposals, according to the Associated Press — really will bring people together, especially when the team is successful. Will the name prevent the front office from trading away Cy Young Award winners like CC Sabathia, Cliff Lee, and Corey Kluber? That remains to be seen. But putting wings on players dealt away might soften the blow a bit.

Regardless, we don’t get too many major name changes like this in sports. (Washington Football Team, you’re up next.) So this is still exciting, even if you’re not a fan (yet) of Guardians. It’s a new day for Cleveland.