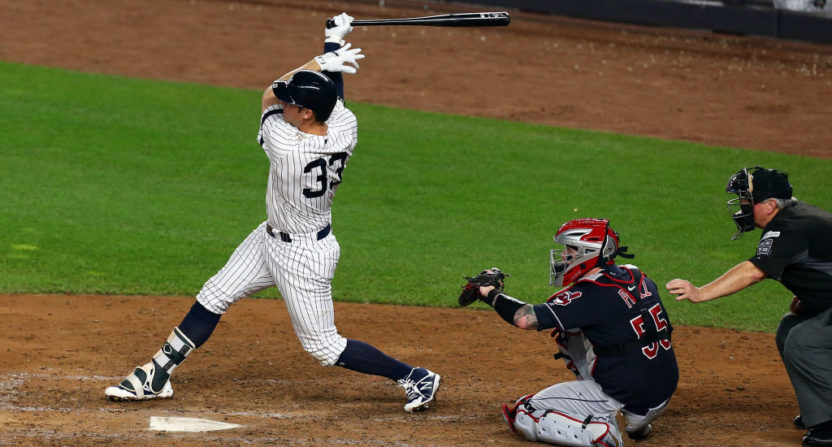 The New York Yankees entered Sunday’s American League Divisional Series game with the Cleveland Indians trailing 2-0 (thanks to a crazy Friday game where Cleveland came back from an 8-2 deficit to win 9-8 in the 13th, with some questionable managing by Joe Girardi along the way), but they came out with a 1-0 win to stay alive. That was thanks to a remarkable solo home run by first baseman Greg Bird off ace Cleveland reliever Andrew Miller:

Miller has been a dominant reliever over the past several seasons with Baltimore (2014), the Yankees (2015-16) and the Indians (this year), posting a 1.72 regular season ERA since 2014 and a .090 career postseason ERA heading into Sunday’s game. Bird, on the other hand, only played in 48 regular-season games this year thanks to injuries, and hit just .190/.288/.422. But on Thursday, he was the right man in the right place, hitting this 396-foot shot off of Miller for the only run of the game.

The Indians had their own chances, of course. Even in the top of the ninth, they were able to get runners on first and second. But top Yankees reliever Aroldis Chapman was able to finish the save and get out of the inning. And fortunately for him, he didn’t have to face Bird. We’ll see how things go in Game 4, but for one night at least, Bird was able to best Miller and keep the Yankees alive.