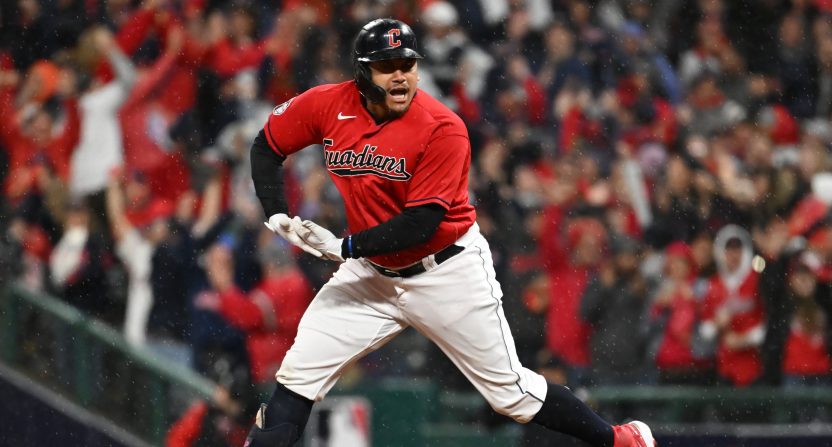 While the New York Yankees fended off elimination in Game 4 of the ALDS against the Cleveland Guardians, one of Cleveland’s highlights got the attention of the MLB world — for all the wrong reasons.

In the bottom of the fourth inning, Josh Naylor hit a solo home run off of Yankees starter Gerrit Cole. and proceeded to break out an extremely disrespectful celebration while trotting around the bases.

The @CLEGuardians are climbing back, they only trail by 1. #Postseason pic.twitter.com/NhnjfM3APH

He began to “rock the baby” aggressively while rounding first base, and even appeared to mouth some profanity about Cole to his teammates while rounding third base, calling Cole his “little f***ing son”

We have certainly seen celebrations in baseball become more prominent, but many believe that Naylor took this one way too far.

Josh Naylor was rounding the bases rocking a baby and calling Gerrit Cole his son. I’m a fan of bat flips and celebrating your work, but don’t make it disrespectful. This is quite disrespectful.

Josh Naylor is an absolute psychopath

In seven years, we’ve gone from benches clearing because Jose Bautista tossed a bat to Josh Naylor rocking a baby with his team still trailing https://t.co/oEENSzzz8U

IS JOSH NAYLOR OUT OF HIS SKULL

It’s certainly a bold move the break out this kind of celebration while trailing in the game, but this is apparently something that Naylor has done before.

Triston McKenzie talked about Josh Naylor's rocking the baby celebration earlier this month: "Nayls, when he hits homers off people, he calls them his son. Hence the rocking the baby as he runs around the bases."

With the Yankees facing elimination and holding a narrow lead, no retaliation was ever likely to come in Game 4.

That being said, brawls have started in playoff games for far less in the past and it was certainly a very controversial move from Naylor. And if Game 5 gets out of hand (particulaly if Cleveland is winning), a response wouldn’t be shocking.

Naylor has been a thorn in the Yankees’ side in the ALDS, driving in runs in each of the games in this series that the Guardians have won.

This celebration certainly won’t earn him any fans in New York, but Cleveland fans will certainly appreciate the passion and production that Naylor has shown off in this series.