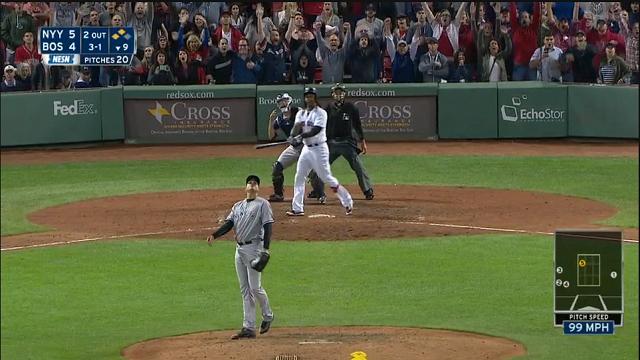 After Boston Red Sox pinch-hitter Aaron Hill struck out to lead off the bottom of the ninth on Thursday night at Fenway Park, the New York Yankees had a 98.1% win expectancy per FanGraphs.

They had a 5-1 lead, and had relief ace Dellin Betances waiting in the wings should things get interesting. Betances entered the night with a 2.33 ERA, 1.47 FIP, and a 3.1 WAR according to FanGraphs, which essentially says that in their estimation, he’s been worth three wins as a reliever this year. He’s been absolutely dominant, and had allowed over two runs in an outing just once over the last three seasons.

Well, after a runner reached with one out, Yankees manager Joe Girardi decided to not screw around anymore and just bring in Betances. The first batter (Dustin Pedroia) walked, and Betances then got Xander Bogaerts to ground into a fielder’s choice for the second out. But then David Ortiz singled (before a pinch-runner replaced him), Mookie Betts singled, and a passed ball allowed both runners to move up a base.

We now have a 5-4 game and runners on second and third, with two outs. Hanley Ramirez is at the dish. Betances falls behind 3-1, and keep in mind there’s a base open, with the winning run at second base. Whatever you do, don’t groove one. Whoops.

Now, granted, that’s a 99-mph pitch, and hitting those is hard.

But Ramirez was sitting dead red there on 3-1 and Betances certainly didn’t want that fastball right over the outer half of the plate.

Obviously it would’ve been nice for the Yankees in this situation if they still had Aroldis Chapman (traded to the Cubs) or Andrew Miller (traded to the Indians), but Betances falling apart like that is still just so unexpected as the numbers shared earlier support.

And putting aside just losing to the rival Red Sox in that fashion, this is a particularly damaging loss to the Yankees’ playoff chances. The loss moves them five games behind the Red Sox in the AL East, and three games back — behind four teams for two spots– in the AL Wild Card race. FanGraphs now has the Yankees’ playoff odds at 6.6%, while it’s estimated the Red Sox now have 95.2% chances (68.1% to win the AL East).