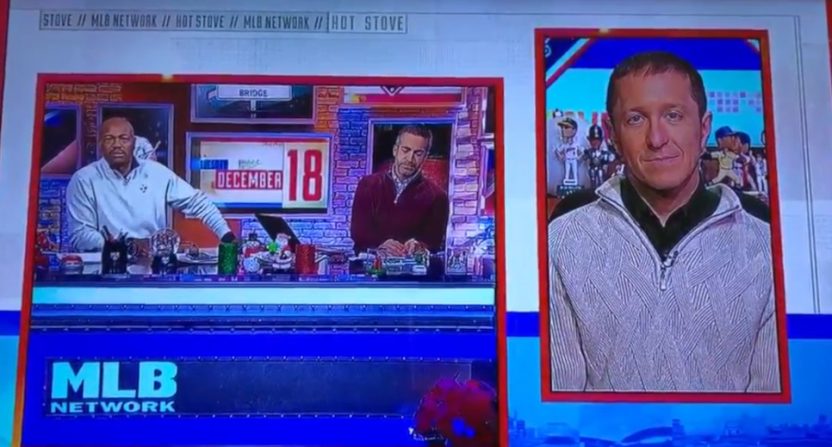 It’s always remarkable when an on-air pundit proves just how little they know about what they’re talking about. Last week, we had ESPN’s Stephen A. Smith talking about the crucial matchup of Hunter Henry (out with a season-long injury) against Derrick Johnson (unemployed), and this week, we have MLB Network’s Harold Reynolds not only proving that he doesn’t understand slugging percentage, but making definitively wrong claims about it. Here’s how this started on MLBN’s Hot Stove Tuesday (hosted by Reynolds and Matt Vasgersian), with a discussion with Ken Rosenthal where they compared Manny Machado and Michael Brantley. Reynolds says “You’ve got to throw home runs in there, come on!” and Rosenthal responds, “Well, it’s factored into slugging,” and Reynolds says “No it’s not!”

This then got better still when Reynolds tried to redeem himself by asking “Is not a home run and a double credited the same thing in slugging percentage?” Rosenthal’s wearied “No” is the perfect response.

Lmaooooo he thought doubles and HR’s counted the same! 😂

Get him off the air @MLBNetwork pic.twitter.com/MpfsiGXFQ7

There are a lot of different baseball statistics, of course, and this would be less terrible if Reynolds had missed on a relatively new or complicated advanced stat. But slugging percentage dates back even before batting average; as per a 2013 article from baseball historian John Thorn, an early version can be traced back to an 1867 piece from Henry Chadwick (and even earlier, as Chadwick had previously published pieces on slugging average; his 1867 piece was arguing for what became batting average instead). It’s also been an official statistic in the National League since 1923 and in the American League since 1946, and it’s received significant discussion as a way to measure hitters’ power both from traditionalists and from those who prefer advanced statistics. It’s also incredibly easy to calculate; it’s just batting average, but with a double counting as two hits, a triple counting as three, and a home run counting as four. (And sorry, Harold, two plus zero does not equal four.)

Slugging percentage has its flaws (in particular, it’s based on at-bats, and thus doesn’t consider plate appearances that end in walks, sacrifice hits, the batter being hit by a pitch, or catcher’s interference), but can be useful. That’s perhaps especially true when it’s combined with something that does track getting on base (such as on-base percentage; the two are added for the widely-used on-base plus slugging, or OPS, and the related OPS+, which is adjusted for park and era). It’s regularly shown in ballparks and on broadcast graphics, and it’s often discussed on game broadcasts and studio shows. So it’s absolutely hilarious that a guy like Reynolds who played 12 seasons in the majors and has been a prominent baseball broadcaster for ESPN, MLBN and Fox since 1996 doesn’t understand slugging percentage. (Then again, considering that he only recorded 21 career home runs and that his career slugging percentage of .341 was only 14 points above his career batting average, maybe he never bothered to look it up because it never made him look good.)

What’s really astounding with this is how definitive Reynolds is about being wrong, though. We all make mental errors and say the wrong thing from time to time, and if Reynolds had just responded to Rosenthal’s “Well, it’s factored into slugging” with “Oh, of course” or even “Oh, I forgot that” or “I didn’t realize that,” it would have gotten a few laughs online but nothing more. But his “No it isn’t!” makes it into an easy-to-share clip, and his later attempt to argue that home runs and doubles are counted the same in a stat that he clearly has no idea about is even better. And this really should be kept in mind when considering any of Reynolds’ strongly-held opinions on baseball; does he actually know what he’s talking about, or is he just saying whatever pops into his mind even if there’s nothing to back it up? (Canadian baseball fans in particular might argue it’s often been the latter.) At any rate, this was certainly a high-profile and hilarious whiff by him.