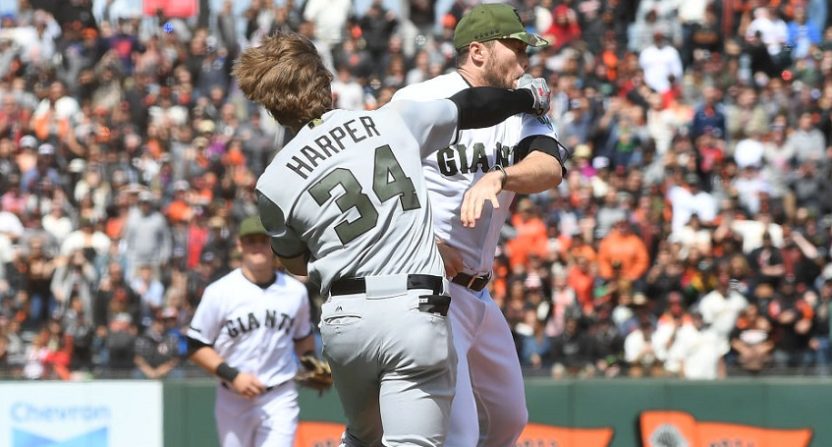 The 98-mph fastball. The hip. The helmet. The punches. The brawl.

Many people are referring to Monday’s fight between Bryce Harper and Hunter Strickland as iconic. That, I believe, is a stretch. However, the ruckus forces baseball’s many blurred lines and unwritten rules to be vetted.

On Oct. 7, 2014, nearly 1,000 days ago, Harper hit a home run off Strickland in the postseason. The Giants went on to win the National League Division Series and, three weeks later, become World Series champions.

Jump back to present-day. Strickland is facing Harper for the first time since 2014. He drills Harper with a 100-mph fastball to the hip. Harper now has two options: Walk to first base, or charge the mound.

Harper chooses the latter, whipping off his helmet and chucking it at Strickland as he charges the mound. Harper takes a few more awkward strides to the hill and Strickland lands the first punch. Harper gets a swing in, benches clear, and seconds later, havoc ensues.

Now, revenge comes in many forms. Revenge is great. Revenge soothes the soul. But a three-year-old grudge? That’s borderline unhealthy. And when it’s clear that Strickland’s own teammates don’t seem to support him, the grudge speaks for itself.

But the fight is a symbol. It’s what makes an otherwise typical three-hour baseball game into a weeklong event. It’s the unwritten rule of baseball that fans are losing their minds over.

Many believe the brawl is a bad example for children. But think back to the first time you watched a baseball brawl. My earliest memory is the 2003 ALCS Game 3, when Red Sox legend Pedro Martinez threw Yankees bench coach Don Zimmer to the ground.

This incident didn’t scar me. I look back on that fight fondly. It was a topic of discussion at many family events and Red Sox-Yankees debates alike. It ignited a spirit and rejuvenated a rivalry. So, for those concerned parents, your children will be just fine. They have bigger things than a baseball brawl to worry about shaping their lives.

Speaking of children, Strickland sure acted like one. It was incredibly selfish and pouty for the pitcher to retaliate by hitting Harper. Even if the 28-year-old wasn’t ready to let go of Harper’s celebration on homers from three seasons ago, he should’ve let his talent do the talking. Strike him out. Stare him down. Be done with it. In wiping the dust off an aged episode, he put his entire team in harm’s way.

As Harper charged the mound, Buster Posey, the face of the Giants’ franchise, put his arms out and seemed to say, “Really, Strickland?”

Posey’s body language suggested he was not in support of this three-year grudge. And now, either he or Brandon Crawford are likely going to pay the consequences if and when the Nationals retaliate. (Nothing of the sort happened Tuesday night.)

Even though Strickland acted immaturely, Harper is not blameless. The Nationals outfielder is known for being open with the media in ways baseball players never have before. His remarks and feelings are fearless. Merely two days ago, Harper spoke to a group of little leaguers and planted a “win or go home” attitude in them early by admonishing participation trophies. Be the best, or don’t play.

Harper feeds off this type of attention. He chose to charge the mound. Sure, it made for an entertaining brawl, but it diminished his character as a ballplayer. For someone who spends so much time being cool, attempting to throw a helmet at someone who’s been ready for that exact moment for three years, is not. This fight will be associated with Harper and the Nationals beyond the end of his career. He added it to a resume full of eclectic affairs.

Dozens of intricate details and debates still besiege this battle, but a few important takeaways are clear. Want to increase the enthusiasm of baseball? Let them fight. How can baseball react? Let the players involved be responsible for their own actions. Suspending Strickland for six days and Harper for four is just that.