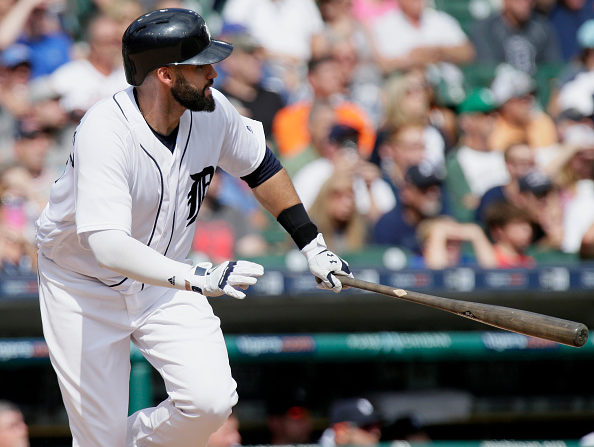 Plenty of established hitters, some of whom are big names, could be dealt at the MLB trade deadline. But let’s focus on a particular 79 home runs and 216 RBI.

No, those aren’t numbers from a superhuman combination of Los Angeles Dodgers’ first baseman Cody Bellinger and New York Yankees’ outfielder Aaron Judge. It’s the combined total from five players who should be on the move by July 31 because of their teams’ inconsistent or poor performances. Which hitters are most likely to pack their bags and join new teams in a little over a month? Let’s dive in.

J.D. Martinez slugs a solo home run to right field, tying the game at 4 in the top of the 8th inning!!! #WhosYourTiger pic.twitter.com/pM5erGd583

While Martinez waited until mid-May to make his 2017 debut because of a foot injury, the 29-year-old right fielder has asserted himself once again. His slash line sits at a stout .294/.380/.622 with 12 home runs and 27 RBI, but his more impressive feats lie under FanGraphs’ hard contact rate, which indicates the percentage of balls hit with “hard speed.” Martinez isn’t eligible to rank under the stat yet because of his limited plate appearances, but he’d currently sit first (52.4 percent) on the list, ahead of sluggers Miguel Sano, the aforementioned Judge, Paul Goldschmidt and teammate Miguel Cabrera.

Since he’s set to become a free-agent in 2018, the Tigers (33-43) likely wouldn’t receive a prosperous amount of talent in return. One sneaky trade partner for Martinez could be the Toronto Blue Jays, who are only 3.5 games back of the second AL wild-card spot after finding themselves 10 games under .500 in early May.

Following a torn ACL in 2016, the 28-year-old third baseman has proceeded forward with a strong first half. He boasts a .268/.305/.532 slash line with 19 homers and 46 RBI. Those power numbers put him on pace to shatter his previous career-high (22) long balls with 42. Moreover, Moustakas’ slugging percentage has already toppled his previous peak (.470 in 2015) in a full season.

The Royals (37-37) sit just 2.5 games back of first-place in the AL Central and two games out of the second AL wild-card spot. However, with Moustakas, outfielder Lorenzo Cain, first baseman Eric Hosmer and shortstop Alcides Escobar all set to become free-agents in 2018, they hold a slim chance of re-signing them, especially their star third baseman. Given the Boston Red Sox’s struggles at the hot corner, general manager Dayton Moore appears to already have a perfect match for the star.

The 30-year-old first baseman has transformed into much more of a presence at the plate five seasons after collecting a career-high 62 RBI with the San Diego Padres. Alonso possesses a respectable .289/.386/.588 slash line thus far, along with amassing 17 homers and 38 RBI thus far. On top of that, he places fourth (159) under wRC+ (weighted runs created), defining a hitter’s value through runs that he has generated on a weighted scale. Only Judge, the Washington Nationals’ Ryan Zimmerman and Goldschmidt rank higher.

With the A’s (34-42) committed to a rebuild, the potential All-Star appears to be on his way out. Alonso would be a cheap rental, worth under $2 million for the remainder of the season. After the Yankees designated first baseman Chris Carter for assignment on Saturday, as well as dealing with Greg Bird’s bone bruise, manager Joe Girardi’s club seems like an ideal fit for the Cuban native.

When the White Sox dealt starter Jake Peavy to the Red Sox in July 2013, the franchise expected its focal point of the trade to pan out. Last season, Garcia totaled a mere .245/.307/.385 slash line, once again failing to exhibit similar production to his early days with the Tigers. But the 26-year-old right fielder has entrenched himself as a revelation in 2017, racking up a .336/.377/.540 slash line with 11 homers and 40 RBI. Plus, he’s tied for third in BABIP (batting average on balls in play) at .407. A chunk of those improvements can be credited to his newfound approach at the plate, increasing his pull rate (46.7 percent) by 10 percent from a campaign ago.

Tied for last in the AL Central, the White Sox (32-42) have been in a clear-cut rebuild mode since dealing starter Chris Sale to Boston in the offseason. With no one off-limits at the trade deadline, according to FanRag Sports’ Jon Heyman, the organization should capitalize on his value while his numbers last. He’s under team control for the next two seasons as well, so the return could be considerable if GM Rick Hahn pulls the trigger before skepticism begins to creep into his peers’ minds.

Similar to Garcia, Ozuna has developed into a rock-solid player a bit later than expected. Nevertheless, he showcases a .319/.383/.575 slash line with 20 homers and 54 RBI, and his power isn’t because of luck, either. The 26-year-old left fielder is tied for fifth among hitters in barrels (26), accounting for how often a batter strikes a pitch with an exit velocity of at least 98 mph and a minimum launch angle between 26 to 30 degrees. Hence, he’s becoming one of the most dangerous hitters in the league. His 2.8 WAR also ranks 11th among hitters.

Although Ozuna is under team control for the next two seasons, the Marlins’ future remains in flux because of their impending ownership change. Whoever takes over the franchise could force a rebuild, and with agent Scott Boras representing the Dominican Republic native, his chances of staying in Miami (34-40) are extremely slim. If Ozuna departs, the organization could rapidly begin its youth movement.