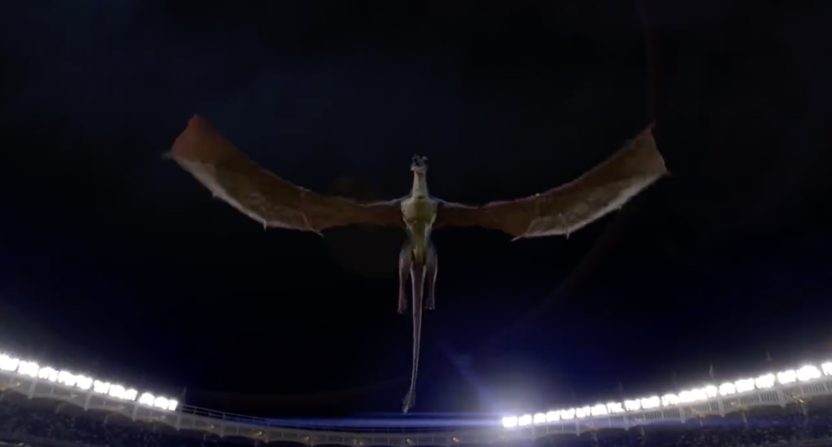 During Game 1 of the Cleveland Guardians–New York Yankees ALDS series, the TBS crew of Bob Costas, Ron Darling, and Lauren Shehadi did an in-game promo for the HBO series House of the Dragon as both networks are under the Warner Bros. Discovery corporate umbrella. Technically, Darling didn’t have anything to do with the promo but Costas and Shehadi went into a faux-news report about a CGI dragon showing up at the game and reporting that officials were “hopeful that the dragon won’t breathe fire during gameplay.”

Bob Costas: "Now, you know, big sellout crowd here, but we weren't 100% sure this game was gonna be played tonight. And for more, it's shocking. Here's Lauren Shehadi…"

*'House of the Dragon' promo with CGI dragon flying over Yankee Stadium* pic.twitter.com/EilVXyanuV

I could be wrong but it felt like nobody involved was thrilled that they had to do this. Costas tried to find some humor in it, referencing Orson Welles and his War of the Worlds radio broadcast that caused people to believe H.G. Wells’ story of a martian invasion was real, but it still felt a bit uncomfortable for them and for us watching.

It’s not a surprise that this got trashed by many people. Suddenly, the Harry Caray hologram is no longer the creepiest thing we’ve seen at a baseball game in 2022.

Only way this could have been more cringe was if Thom Brennaman was doing the live read https://t.co/bzUI9eZe40

You have no idea if that was actually CGI. They should really postpone the series. https://t.co/gVi0h3Jrjj

No graphic to accompany a CGI dragon over Yankee Stadium probably played nicely for those watching in a public space without TV volume. https://t.co/9KJcuWTraM

Do my bets get voided if a player is eaten https://t.co/8pszCFlg5u

What if we has the Harry Caray hologram riding the dragon? https://t.co/iNHrbvMDn0