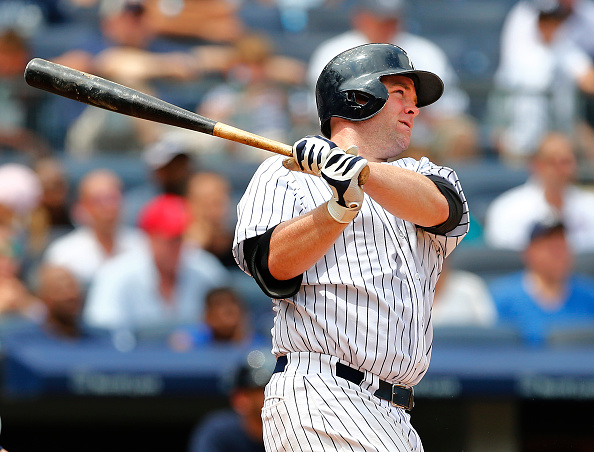 The Houston Astros are going all-in for 2017.

The Astros acquired former All-Star Brian McCann from the New York Yankees in exchange for pitching prospects Jorge Guzman and Albert Abreu. Ken Rosenthal of Fox Sports reports the Yankees will pay $5.5 million of McCann’s $17 million salary in each of the next two seasons.

TRADE: The @Yankees have acquired RHPs Albert Abreu and Jorge Guzman from Houston for C Brian McCann and cash considerations.

The move represents a stark change in direction for the Astros. Unlike the big Ken Giles deal with the Phillies last offseason, acquiring McCann represents the next step in Houston’s plan of contention, as he is a player that will help them in the short-term rather than for years to come down the road. GM Jeff Luhnow has done a remarkable job stockpiling assets over the past five seasons, consistently ranking among the best farm systems in baseball. With the Astros approaching the brink of being a very good baseball club, the organization is starting to use those assets to help them win today. No more penny-pinching.

Acquiring McCann will help accomplish the goal. The 32-year-old has been as consistent as a catcher can be at the plate, hitting at least 20 home runs in nine straight seasons. In 2016 with the Yankees, McCann hit 20 dingers, drove in 58 runs and hit .242 with a .335 OBP. McCann made a career-high 28 starts at designated hitter thanks to the emergence of Gary Sanchez in the second half of the season, and with the Yankees confident they’ve got a long-term answer at catcher in the blue-chip Sanchez, McCann appeared destined to be dealt this offseason.

Defensively, McCann ranks as one of the game’s better framers, and he also does a good-enough job at blocking pitches at the plate. His 23% caught-stealing rate in 2016 was the below MLB average and below his career 26% rate. With McCann and Evan Gattis behind the plate, the Astros catchers will produce offensiveky. Realistically, with the duo shifting from DH to C, Houston could conceivably get 40-50 home runs from the pair. It doesn’t hurt McCann’s $11.5 salary will likely (“likely” being the key word) be less than what former Stros’ catcher Jason Castro gets on the open market on a long-term deal.

Trading Abreu and Guzman, two young flame-throwers capable of hitting triple digits with their fastballs, would hurt other farm systems, but in a stacked Houston organization, it’s a small price to pay for a starting catcher.

The Astros also upgraded their outfield with another veteran. Jeff Passan reports Houston has agreed to a four-year, $52 million with Josh Reddick.

The 29-year-old is coming off a middling season split between the Oakland A’s and Los Angeles Dodgers, where he hit 10 home runs and drove in 37 runs with a .281 batting average and a .345 OBP in 115 games. Since Reddick’s breakout year in 2012, where he won a Gold Glove and hit 32 home runs with Oakland, his career has been slowed down by injuries. But last year was a nice return to form for him before the trend arrow ticked back down in 2016.

Reddick is a plus-outfielder with a good arm. In 2016, he had eight outfield assists and +6 DRS. He’s a smooth runner who could fit anywhere in the Astros outfield, although Reddick has traditionally played right field during his career. Offensively, if Reddick can return to form and hit 20 home runs and steal 10 bases with a .270 average and .335 OBP, he’ll be a steal at $13 million per season. His health is always a question, but signing Reddick early in free agency is a shrewd move that will help Houston contend.

The offseason has just begun, but Houston is showing they’re serious about making the jump from a good 84-win team to a playoff contender, like they were in 2015. The Astros aren’t done with the moves, because they still need a starting pitcher or two to reinforce their rotation. If you’re a fan in Houston, prepare for a busy offseason.