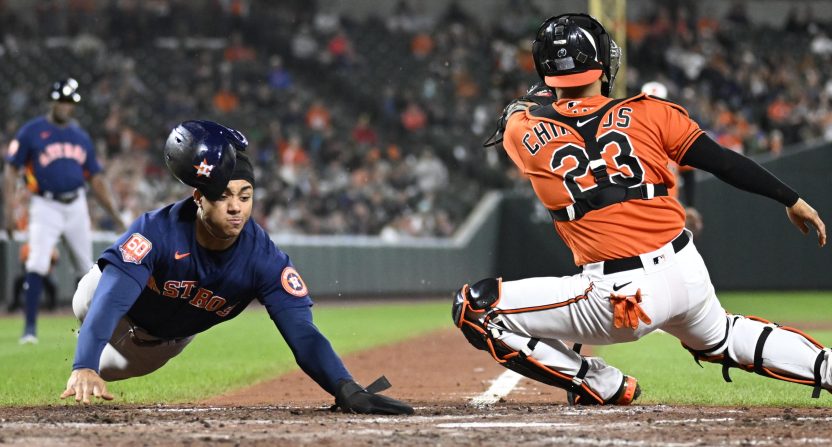 After losing Carlos Correa in free agency to the Minnesota Twins, the Houston Astros — owners of an AL-best 99 wins — have still gotten very good production out of the shortstop position from rookie Jeremy Peña. But Peña left Saturday night’s game against the Baltimore Orioles after suffering an injury while faceplanting.

Peña faceplanted while diving into home plate — hey, at least he scored — in the top of the fifth inning.

Peña exited the game in the bottom of the fifth inning and was replaced by veteran utility man Aledmys Díaz.

The Astros announced that Peña suffered a facial abrasion and is day-to-day.

Jeremy Peña left tonight’s game with a facial abrasion. He is day to day.

Peña, who turned 25 on Thursday, entered the season as the Astros’ No. 1 prospect. He’s looked the part as a rookie, with clear power-speed skills — 19 home runs and 11 stolen bases (in 13 attempts) — and sensational defense at the premium position of shortstop. His 16 defensive runs saved lead all major-league shortstops. Great defense at shortstop is extremely valuable, and that’s the biggest reason why he’s been worth a terrific 4.2 wins above replacement (WAR) per Baseball Reference.

So, Peña is a crucial part of this title-contending Astros team, and the Houston pitchers especially hope their defensive vacuum is ready to be out there at shortstop again very soon.