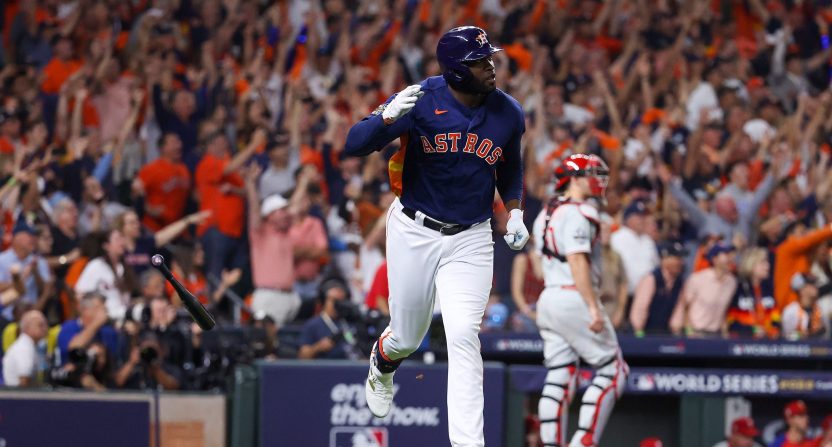 Houston took down the Philadelphia Phillies 4-1 in Game 6 on Saturday night at Minute Maid Park.

The Astros trailed 2-1 in the series, but they threw a no-hitter in Game 4, grinded out a one-run victory in Game 5, and then had a fourth-run sixth inning to blow open Game 6 (after trailing 1-0). A 2-1 series deficit turned into a 4-2 series win.

The Phillies took a 1-0 lead on a Kyle Schwarber home run in the top of the sixth, but Houston answered in a big way in the bottom half of the inning.

Yordan Álvarez absolutely annihilated an offering from Jose Alvarado and sent it 450 feet to dead center. This is a mind-blowing lefty-lefty bomb on the biggest stage in baseball:

Starting pitcher Framber Valdez was excellent on the mound for Houston, allowing two hits, one run, and two walks, while striking out nine over six innings.

Houston rookie shortstop Jeremy Peña was named World Series MVP (and hopefully you took our advice on that prop bet). He certainly did an incredible job replacing Carlos Correa.

Safe to say he was up for the challenge pic.twitter.com/iZ5uwKftgP

And this is the first championship Dusty Baker has ever won as a manager. The 73-year-old began managing in the majors with the San Francisco Giants in 1993.

Here’s a look at how the baseball world is reacting to Houston’s World Series title:

The Houston Astros are the 2022 World Series champions. They were an unrelenting machine, excellent in all facets, more-than-representative champions. Their past is their past. Their present is undeniable.

They're the first franchise with a .620 win percentage and multiple titles in a six-year span since the 1953-58 Yankees. pic.twitter.com/fJocpaCt8v

The Astros' bullpen was one for the ages…

The Astros are the first bullpen to throw at least 40 innings in a single postseason and post a sub-1.00 ERA. pic.twitter.com/cvVyYYIioZ

The Astros were outhomered in the World Series, 8 to 5

Most strikeouts thrown in a World Series:

An absolute dynasty, these Astros.

It's fascinating that the same group of people who insist the steroid guys tainted baseball forever are perfectly content to move on from the Astros cheating.