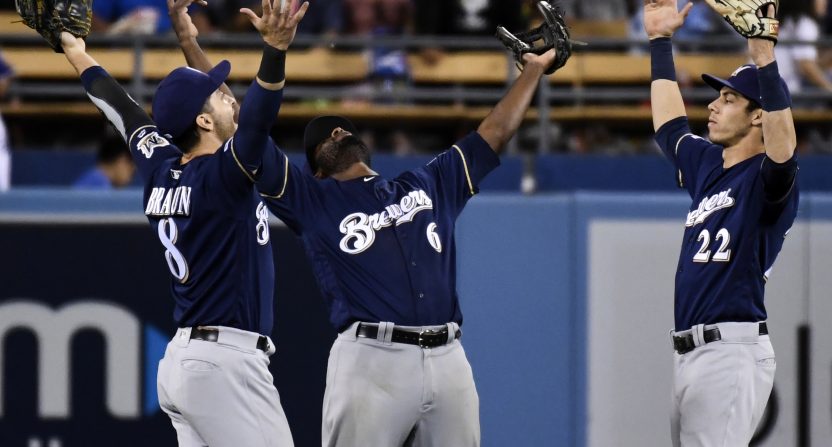 There’s not much you can take away from a three week sample size, especially at the start of the season. Shit happens. Players get off to cold starts. Other players start the year on the IL and take awhile to get healthy. But for some teams, the start of a season can point to future struggles over the rest of the year, and we’re seeing warning signs for many teams already in 2019. But how about the 2018 Postseason teams? How concerned should they be about their starts?

These teams are all off to great starts (Houston is 12-6, LA is 12-8, and Milwaukee is 12-7) and are leading their divisions. Coincidentally, their division leads are just half a game, with another team hot on their heels in third place, but things are going quite well for these three so far. Sure, there are concerns (Milwaukee’s rotation, the Dodgers’ middle relief) for the teams, but they’re not pressing issues that need to be taken care of right now.

These three teams are having different seasons to this point. Cleveland is 11-7 and is leading the terrible AL Central. Oakland is 11-10, but is fourth in a tight AL West. The Yankees are just 8-9, but are a whopping 5.5 games out in the AL East, thanks to the white hot start from the Tampa Bay Rays. So why is there “some” concern about these three teams?

Indians: their offense has been horrible outside of Carlos Santana and Leonys Martin. Perennial MVP candidate Jose Ramirez is slashing a pathetic .145/.200/.232. Francisco Lindor hasn’t played yet, but should be back by the weekend. After two great starts, Mike Clevinger was placed on the DL and is expected to miss a good chunk of the rest of the season. Corey Kluber has a 6.16 ERA in four starts, while Carlos Carrasco’s is at 7.41. Despite all that, the Indians still lead their division, the bullpen (without departed free agents Cody Allen and Andrew Miller) is doing just fine, and the rotation duo of Trevor Bauer and Shane Bieber have more than picked up the slack for Carrasco and Kluber. The Indians are fine right now, and they’ll be in even better shape when Lindor returns and if they can get Carrasco, Kluber, and Ramirez back on track.

Yankees: New York has been doomed by short-term injuries. They have an All-Star team on the IL right now, including Miguel Andujar, Dellin Betances, Gary Sanchez, Luis Severino, and Giancarlo Stanton. And despite all those guys being out….the Yankees are still playing reasonably well. Clint Frazier (!), Aaron Judge, and Gleyber Torres are all mashing, with four homers apiece. After three poor starts t begin the year, James Paxton torched the Red Sox on the mound Tuesday night with 12 strikeouts in eight scoreless innings. Masahiro Tanaka has been pretty good through four starts, and the bullpen, even without Betances, has held serve. The biggest concerns with the Yankees are that the injuries will linger all season (especially with the pitchers), and that the lack of rotation depth could come back to doom them. But given everything that has happened to the Bronx Bombers this season, they should feel pretty good about things going forward.

Athletics: Oakland’s 2018 was somewhat fluky, so evaluating them going forward was always going to be difficult. I have no idea what to make of them. Matt Olson, after a breakout 2018, is already on the DL. Both Kendrys Morales and Jurickson Profar have been terrible, as have Marco Estrada and Mike Fiers in the rotation. Veteran relievers Fernando Rodney and Joakim Soria, who were theoretically supposed to bring stability to the bullpen, have stunk. Despite all that, Blake Treinen and Lou Trivino have been lights out in the pen, Brett Anderson and Frankie Montas have performed admirably in the rotation, and Matt Chapman and Khris Davis have been freakishly good with their bats this season. I only get worried about the A’s because I don’t think they’re going to be able to compete with the Astros in the AL West, and the rest of the division looks pluckier than I expected. With the Rays off to a great start, the Twins off to a fine start, and the Red Sox still lurking, it might be more difficult for Oakland to win a Wild Card this season.

For these two teams, the concerns are similar. Their offenses are incredible, with the Braves ranking second in the NL in both wOBA and wRC+ and the Cubs ranking third in wOBA and fourth in wRC+. The pitching staffs? Well….there are plenty of issues there. Atlanta ranks ninth in ERA among all NL teams, while Chicago ranks tenth. The Cubs are 11th in team FIP, while the Braves are 12th. Atlanta has the worst walk rate in the National League, while the Cubs are second-worst.

And for both teams, the issue lies not in their rotations (which are middle of the pack – seventh in starter ERA for the Braves, eighth for the Cubs), but in their horrendous bullpens. Atlanta’s bullpen ERA is 5.17, tenth in the NL. Chicago’s is 5.25, 12th in the league. Cubs relievers have the worst walk rate in the NL, Braves relievers have the second worst. Chicago’s already rolled through 12 relievers (including starter Jose Quintana in long relief), and Atlanta has used 13 guys out of the pen (including starters Max Fried and Touki Toussaint in long relief). Four Cubs relievers with at least four appearances have an ERA over 6.00, four Braves relievers with at least four appearances have an ERA over 6.00. Relief pitching has been a complete mess for both teams, and they are both going to need to solve this issue if they want to return to the Postseason in 2019 – especially given that both play in tight divisions with a number of teams itching to contend.

It’s been a mess for these two teams.

Red Sox: Mookie Betts is struggling, and Boston’s high octane offense is 11th in the AL in wRC+. The Red Sox rotation has struggled outside of David Price, and Nathan Eovaldi, Rick Porcello, Eduardo Rodriguez, and Chris Sale all have ERAs over 6.00. The bullpen ERA is a slick 5.15, ahead of just the Royals and Orioles in the American League. There are only five players on the entire team living up to expectations: Price, JD Martinez, Xander Bogaerts, Mitch Moreland, and reliever Ryan Brasier. This looks a lot like another Boston hangover year after a World Championship, and with the Rays soaring and the Yankees also lurking, this 6-13 start could provide too big of a hole for the Red Sox to dig out of. They’re clearly talented enough to put it all together, but this was not the way to begin 2019.

Rockies: Coors Field notoriously screws with the wRC+ of Rockies players, but it has to be somewhat worrying that outfielder David Dahl is the one player with a wRC+ above 90 for the season. On the bright side, four players (Dahl, Trevor Story, Mark Reynolds, and Nolan Arenado) have a wOBA above the MLB average of .317, but Story’s .331 wOBA ranks tied for 186th in baseball. That’s not good for your second-best hitter! Colorado’s bench has been horrible (which it seems to be most years), and starters Charlie Blackmon, Ian Desmond, and Garrett Hampson have all be terrible with wOBA marks all under .250. Things on the mound haven’t been a disaster for Colorado, with Jon Gray and German Marquez carrying an underperforming rotation, and the bullpen has been just fine (a marked change from most struggling MLB teams this season). But with that offense being as poor as it has been so far, the Dodgers storming the division, and the Padres surprising on the field early on, Colorado fans should be worried about the hole they’ve dug for themselves so far.