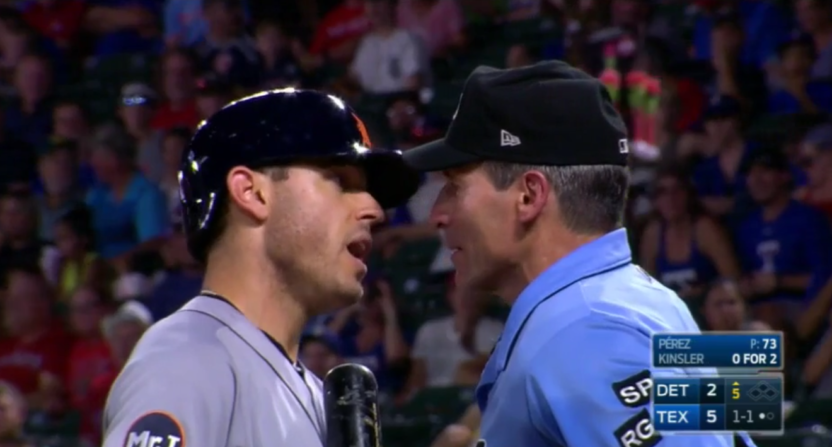 The last time we heard from Ian Kinsler, he was expressing some very bad opinions at the World Baseball Classic. He’s still willing to speak his mind, and this time, his target is much less sympathetic.

Angel Hernandez ejected Ian Kinsler for arguing balls and strikes on Monday night, and he ejected Detroit manager Brad Ausmus shortly thereafter. Post-ejecting, Kinsler didn’t appear to hold back when presented with the cost-free opportunity to tell Hernandez, to his face, just what he thought about him:

And now, a day later, Kinsler was asked his thoughts on the matter, and he somehow went even further with his critiques, up to and including a suggestion that Hernandez’s competency (or lack thereof) was ruining baseball’s competitive integrity.

Via Chris McCoskey of The Detroit News:

He was asked if he was surprised at how quickly Hernandez gave him the boot Monday.

“No, I’m surprised at how bad an umpire he is,” Kinsler said. “I don’t know how, for as many years he’s been in the league, that he can be that bad. He needs to reevaluate his career choice, he really does. Bottom line.”

Kinsler was asked if he was speaking on the record.

“Sure,” he said. “If I get fined for saying the truth, then so be it. He’s messing with baseball games, blatantly.”

Kinsler was asked if he felt Hernandez was just biased against him.

He was asked again the issue was personal between him and Hernandez.

That entire piece is great, as it includes Kinsler’s history with Hernandez, as he told the story of an incident in his rookie year when Hernandez apparently yelled at Kinsler on the field for obstructing the umpire’s line of sight. At this point, Angel Hernandez would probably rank at or near the bottom of everyone’s “worst umpire” lists, so stories like this aren’t much of a surprise, but when you begin throwing out players and managers, you really should be a bit more careful. No one thinks umpires can be perfect on balls and strikes, it’s why the movement for robot umpires has garnered more traction.

But umpires can be a lot closer to perfect when it comes to managing and deescalating situations, and that’s an area in which Hernandez, especially, falls very short of competent.