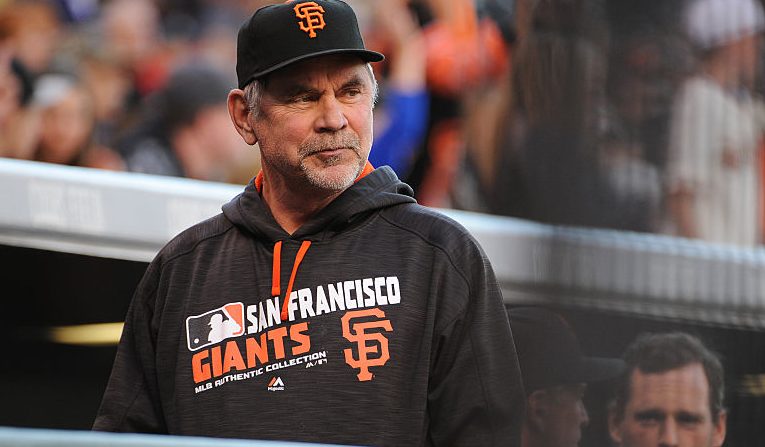 Three-time World Series winner Bruce Bochy says “never say never” regarding a return to a major league dugout. One of his former teams might be a great fit, currently in dire need of veteran leadership.

Sportico’s Barry M. Bloom spoke to Bochy recently and the veteran skipper, currently a consultant with the San Francisco Giants, said his health has recovered well enough that he’s open to the idea of taking a manager position again in MLB.

“I think I’ll just say what I’ve been saying: I don’t think you rule anything out,” said Bochy, who was also the Padres backup catcher on the 1984 NL championship team. “I’ve enjoyed doing what I’ve been doing, working with the Giants, going through the minor league affiliates. I went to spring training for a couple of weeks, but you never say never. That’s my mindset.”

That revelation comes as the San Diego Padres near the end of a tremendously disappointing season. The Padres were viewed as a playoff contender in the National League West, a suitable challenger to the reigning World Series champion Los Angeles Dodgers after adding pitchers Yu Darvish, Blake Snell, and Joe Musgrove to a roster that includes superstar sluggers Fernando Tatis Jr. and Manny Machado.

Yet the Giants emerged as a surprise contender in the NL West and are battling the Dodgers for first place during the final two weeks of the regular season. Meanwhile, the Padres are 20 1/2 games behind the Giants (and 19 1/2 behind the Dodgers) in the division. Even a wild card playoff spot is in doubt with San Diego currently four games behind the St. Louis Cardinals for the NL’s second bid.

Falling short of expectations and facing no postseason has increased the pressure on players and coaches. Those tensions were on display for all to see last Saturday when video of an argument in the Padres’ dugout between Machado and Tatis was posted by a fan to social media.

To say that’s not a good look would be an understatement. Yes, players and coaches argue all the time during the course of the season. And had this disagreement taken place in the dugout tunnel or the clubhouse, out of sight from prying smartphone cameras and news photographers, it might have gone unnoticed. Yet baseball fans across the internet saw Machado shouting at Tatis, telling him that “it’s not about you.”

Reporting from The Athletic’s Ken Rosenthal, Dennis Lin, and Britt Ghiroli the next day provided context to the images that appeared to show a team completely falling apart. The argument began when bench coach Bobby Dickerson confronted Tatis about his reaction to a called third strike, trying to motivate him to move past it and get back in the game. When Tatis balked at Dickerson, Machado joined in with a similar message.

To most observers, the incident demonstrated the lack of leadership in the Padres’ dugout. There isn’t really a veteran leader among the players. First baseman Eric Hosmer typically played that role, but declining performance (.234 average, .635 OPS in September) has undercut his authority. Machado is apparently trying to become that leader, but as seen in that video, his hot-headed demeanor doesn’t bring calm to tense situations.

So what about the manager and coaching staff? Jayce Tingler is in his first full season after last year’s COVID-shortened campaign and had no managerial experience (and little major-league coaching experience) when hired by the Padres. Following the dismissal of another first-time manager in Andy Green, Tingler was a curious hire by general manager A.J. Preller.

Several managers have succeeded without prior managerial experience, even at the minor-league level. But skippers like the Dodgers’ Dave Roberts, Dave Martinez of the Nationals, the Rays’ Kevin Cash, and Alex Cora of the Red Sox, for example, spent years on major-league coaching staffs and working under established managers. Some, such as the Yankees’ Aaron Boone and David Ross of the Cubs, played in the majors and established themselves as leaders.

Though Tingler’s lack of experience isn’t disqualifying, it does raise doubt when reporters like the San Diego Union-Tribune‘s Kevin Acee write, “Manager Jayce Tingler does not possess the sway to have quashed a situation that had been brewing for weeks.”

And when a manager lacking pedigree fails, the natural impulse is to bring an opposite figure in as a replacement. Would the Padres have played better with a veteran manager such as Buck Showalter, Mike Scioscia, or John Farrell? What if Preller had hired Joe Maddon or Joe Girardi when they were available?

If Bochy is open to being a manager again, how can the Padres not call him? As he told Bloom, then-team chairman Ron Fowler inquired after Bochy retired from the Giants in 2019. But he wasn’t interested then. Bochy needed a break. He needed to recover from heart issues and other health concerns. Apparently, however, he’s doing well now.

Fowler is no longer in control of the Padres’ ownership group, turning that role over to Peter Seidler. But he’s still a chairman with the team and surely in a position to influence Preller if he chooses.

Could there possibly be a better choice than Bochy? And could Bochy find a better situation than a Padres team ready to win now? How bad would it look if other teams possibly in the market for a new manager — including the Yankees, Twins, or Mets — swooped in and hired Bochy instead?