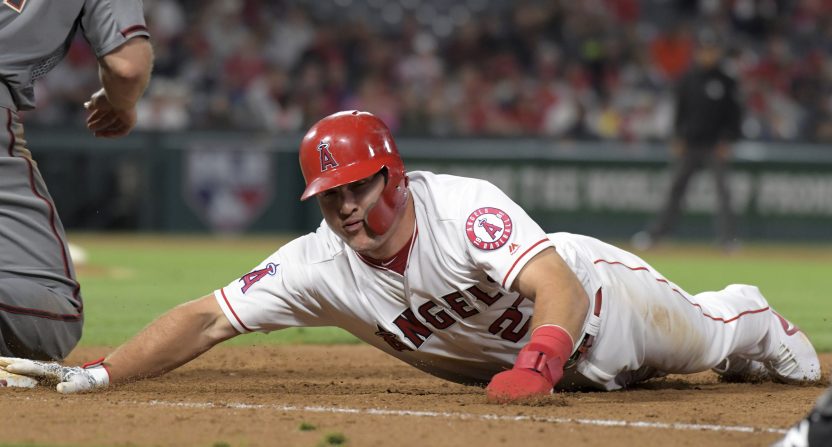 Before the Josh Hader Twitter timeline became the big-name controversy of the All-Star Game, we had a mini-flareup between Rob Manfred, the Angels, and Mike Trout. The subject: Trout’s marketability specifically, and how to market MLB players in general.

Manfred’s initial comments were somewhat tone-deaf, which ironically is kind of on brand for him:

This predictably didn’t go over well, because traditionally a player’s responsibility is to play well and excel on the field or the court, while the league’s market penetration and fans take care of the rest. Mike Trout has certainly held up his end of the bargain, as he’s 26 and by WAR already has a Hall of Fame career. Trout does do commercials, and he does plenty of other awesome things too.

A couple weeks ago at Camden Yards, I watched Trout pull a 6-year old out of the pregame crowd. He spent the next 15 minutes with the kid by his side during BP. Stretched with him, chatted with him. Even gave him his bat. Never seen anything like it. It looked like this. pic.twitter.com/eZhagoXeb4

Trout also donates his time to charities like this:

Good luck to our #WishGranter @MikeTrout of the @Angels tonight in the @MLB #AllStarGame #TheHaloWay Our #WishKid Michael will never forget this moment with you from his Wish! Read about Michael`s Wish here –> https://t.co/9jizCLkEdg pic.twitter.com/w5eiGYn2AX

Among many other things. What else does Manfred want Trout to do, aside from play on a good team, which is also not Trout’s fault? Trout doesn’t set the national broadcast schedule. Manfred deflecting is a bad look on multiple levels, and the Angels definitely weren’t happy about it:

On behalf of the Angels Organization and baseball fans everywhere, congratulations to Mike Trout on another outstanding All-Star Game performance.

Mike Trout is an exception ambassador for the game. Combined with his talent, his solid character creates a perfect role model for youn people everywhere. Each year, Mike devotes a tremendous amount of his time marketing Major League Baseball. He continually chooses to participate in the community, visiting hospitals, schools, and countless otehr charities. One of Mike’s traits that people admire most is his humility. His brand is built uopon generously spending his time engaging with fans, both at home and on the road, while remaining a remarkable baseball player and teammate.

In addition, Mike spends quality time as a husband, son, brother, uncle, and friend. We applaud him for prioritizing his personal values over commercial self-promotion. That is rare in today’s society and stands out as much as his extraordinary talent.

Late last night Trout himself added his own statement, which is pretty clearly from Trout himself, and not an agent or PR firm, as you can tell by his trademark after-period double space:

I have received lots of questions about Commissionr Manfred’s recent statement. I am not a petty guy and would really encourage everyone to just move forward. Everything is cool betwen the Commissioner and myself.  End of story.  I am ready to just play some baseball!”

And as to Manfred, that he would look at the problem of baseball players in 2018 not being as recognizable as players from other sports and immediately jump to “It’s the player’s fault!” is so telling. First of all, if you can’t make money off of Mike Trout, you should get out of the money-making business. But second, if Manfred wants players to market themselves, he should start by allowing them to do so on the field. One of the reasons the NBA has been so successful is the personality of various players comes through on the court.

In baseball, there’s an odd contingent of players, coaches, media, and apparently the league office that are so obsessed with “playing the right way” that some of the league’s biggest and brightest stars get suppressed. But it’s more than just celebrating hits or homers. Willson Contreras can’t wear a Venezuela sleeve. Players can’t be too expressive or joyful or mad without fear of retribution from incompetent umpires, or worse opposing managers and pitchers armed with 95 MPH fastballs, retribution that is essentially sanctioned by the league every time it goes lightly punished.  Or they get policed by their own teammates, like Bud Norris this year or like Jonathan Papelbon choking out Bryce freaking Harper in the dugout less than three years ago.

All of these issues, combined with plenty of other factors at the league level (playoff game starting times, the impossible blackout rules, and more) are all much bigger factors than Mike Trout not doing a few extra commercial shoots per season.

It’d be nice if the people in charge of the sport were quicker to blame something other than the players, who are already responsible for every single revenue dollar baseball generates.