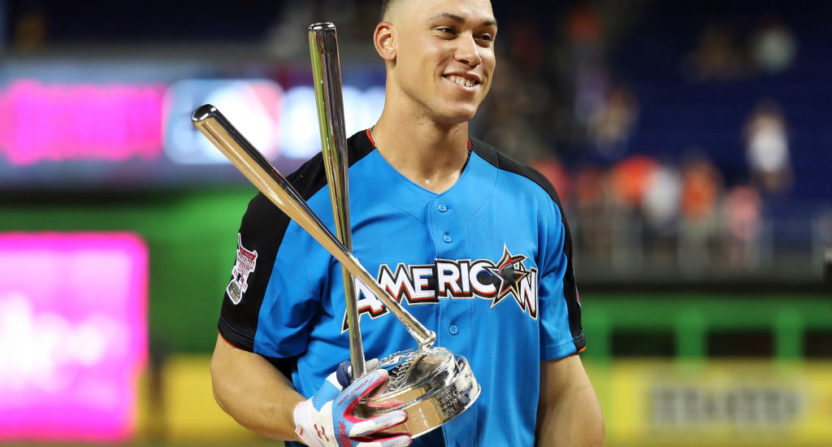 Monday’s MLB Home Run Derby was the most fun iteration of the event in years. That was due, in no small part, to Aaron Judge, who looked and performed more like a Greek God than a human. But fun derbies often give way to more boring and forgettable events in the following years. Then formats change and the event feels fresh and fun again.

Instead of waiting for the event to become less interesting next year, wouldn’t it be great if the MLB tried to top this year’s event? The 2017 derby was great, but it definitely would have been improved if Judge and last year’s champion Giancarlo Stanton faced off at some point. In fact, how much more fun would it have been if Judge has faced actual competition in the semifinals and finals at all? Or if we didn’t have to waste time on guys like Charlie Blackmon and Mike Moustakas?

Here’s an idea: an All-Star version of the derby made up mostly of past champions. This would be a one-time thing or a once-a-decade, not a recurring event, so as not to become stale. There’s no better time to start than 2018.

As an astute reader might have noticed, there are only five active home run derby champions: Judge, Stanton, Todd Frazier, Yoenis Cespedes, and Robinson Cano. So, that wouldn’t be enough for an entire field. But it’s a hell of a start. Stanton and Judge are the preeminent power hitters in the major leagues. Both are capable of slamming 500-plus dingers and both would easily be crowd favorites.

It’s easy to forget now, but Cespedes was a monster in 2013 and 2014. He’s one of the few that has won multiple times. His raw power can’t quite match Judge and Stanton, but he’s as good as anyone else in that department. Frazier won in front of his home crowd, smacking 39 dingers in the process. He’d be the weakest of the bunch, but he is a champion. Cano won a lifetime ago – in 2011, when he was still a Yankee. He’s firmly in his mid-30’s now, but is coming off a 39-homer season in 2016.

Then there’s the matter of filling out the rest of the field. One interesting option would be to invite back a retired former champion. The obvious choice for 2018 would be David Ortiz. Even if he’s not in game shape, he almost definitely still has that power stroke. Plus, he’d absolutely be a crowd favorite.

Two-time champion Prince Fielder is probably a no-go unless his health improves before that point. I’m not sure anyone outside of the Twin Cities would be enthralled by a Justin Morneau return. But there are other interesting options. Vladamir Guerrero would a fun choice. And how amazing would it be to see a 50-something Barry Bonds go at it with the youngins? He’s not as big as he once was, but I’d be a shiny penny he still has that power stroke.

To be realistic, we’ll mark down Ortiz, bringing the total to six. To get the field to the tradition number of eight, we’ll include each league’s home run leader at the All Star Break (or whoever is next behind Judge, Stanton etc.). This would give an opportunity to the Mark Trumbo and Chris/Khris Davis types who perennially smash dingers and the Logan Morrison/Eric Thames types that have jumped out onto the scene in the first half.

Ideally, you’d see a 2018 lineup of Judge/Stanton/Cespedes/Frazier/Cano/Ortiz/Trumbo/Cody Bellinger. It would be riveting. There would be weeks of buildup, more Vegas action than usual, and you might even get some airtime during those daytime screamfests on FS1 and ESPN.

Don’t wait for this format to get boring, MLB. Give us a Champions Derby.