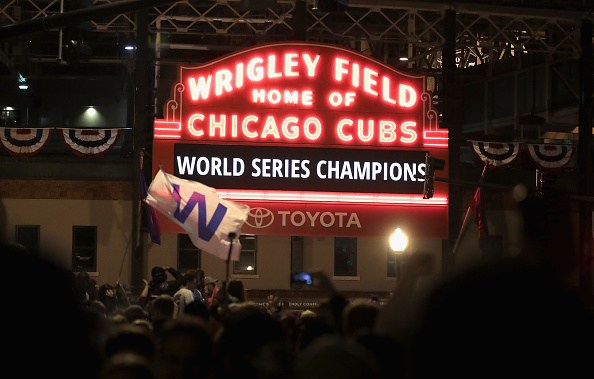 The Chicago Cubs just snapped a 108-year championship drought to win the World Series, after winning an MLB-best 103 games in the regular season. They will also enter the 2017 MLB season as World Series favorites, featuring several young stars that are a joy to watch. They play their home games at Wrigley Field, a baseball shrine that has gone under renovations for the last few years to only make it a more appealing experience for fans. However, the ballpark seats under 42,000 people, a middle-of-the-pack seating capacity for MLB stadiums.

Add all of that up, and it would seem foolish for the organization to not increase ticket prices considerably.

So, it’s hardly a surprise — yes, the headline was sarcasm — that the Cubs are raising ticket prices an average of 19.5% in 2017, as Carrie Muskat of the Cubs’ official website explains:

Season-ticket holders will receive an email on Monday with the details. The team said the average ticket price increase will be 19.5 percent, with a range by section from six to 31 percent, and the highest-priced tickets will be for the best seats.

The hikes bring the new average season ticket price at Wrigley Field to around $58 per ticket, based on Team Marketing Report’s MLB Fan Cost Index. That’s 31 percent more than Cubs tickets cost three years ago and may be high enough to surpass the average ticket prices of the New York Yankees and Boston Red Sox, which have historically had the highest price of admission.

Ticket prices were also raised by double-digits (10%) in 2016, and the Cubs still drew over 3.2 million fans, good for the third-highest attendance mark in franchise history.

As for Cubs season ticket numbers? The waiting list is currently around 109,000 people!

Now, the Cubs are going to add over 200 seats in 2017, but those will cost you $16,000 (!) over a full season, according to Ecker. The seats will be called the “Bullpen Box”, located down each foul line where the bullpens were previously located, as the Cubs are moving the bullpens to underneath the bleachers.

There will still be affordable options starting at $9 for some games at Wrigley, according to Muskat:

Families can still find affordable ticket options at Wrigley Field, including tickets starting at $9 and more than a quarter of the schedule categorized as either “bronze” or “silver” games.

So, you can find an affordable ticket, but I’m going to guess that most of those seats are in crappy weather during April or May, and/or against teams like the Cincinnati Reds and San Diego Padres. If you want a nice seat, or to even be in the stadium at all for a game in the summer against a good team, it’s going to be quite pricey.

But until the seats aren’t being filled, why not increase the price? It’s unfortunate, but it’s just the reality of the business. The Cubs could probably increase the ticket prices an additional 20%, and still do okay attendance wise. Perhaps that idea is put to the test in 2018.