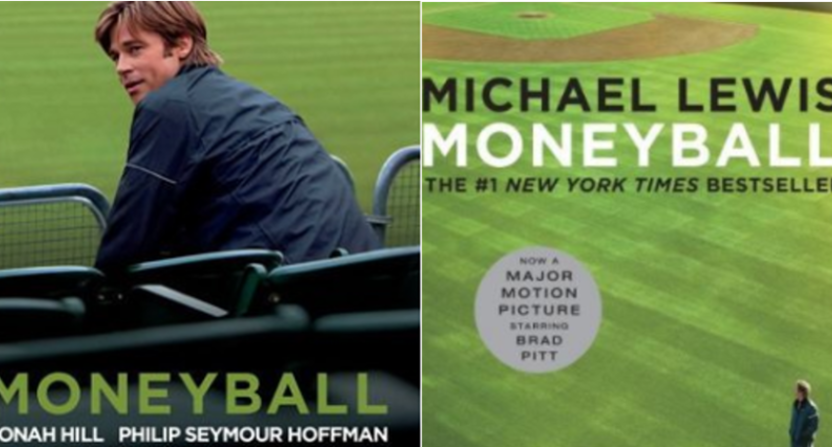 The Cleveland Indians went on an incredible run this year, winning 22 straight games (the longest MLB streak in 101 years) and finishing the regular season with an American League-best 102-60 record, but their playoffs ended in the ALDS thanks to the New York Yankees beating them 5-2 in Wednesday’s decisive Game Five to win the series 3-2. That brought back memories of the 2002 Oakland Athletics, who won 20 consecutive games (an AL record that lasted until this year’s Indians), had their season and overall approach chronicled in Moneyball, the book and the film, and posted a 103-59 regular season mark, but fell 3-2 in the ALDS to the Minnesota Twins.

Oh, and the Indians were the first 100-win team to blow a 2-0 ALDS lead since the 2001 A’s, who went 102-60 in the regular season before losing the ALDS 3-2 to, you guessed it, the Yankees. Those connections led to a whole lot of people making Moneyball references on Twitter:

The Indians are the 1st 100-win team to blow a 2-0 lead in the #ALDS since the 2001 Athletics who also lost to the Yankees. #MoneyBall

The Moneyball sequel better include the Major League groundskeepers. https://t.co/m3Hs38NYIC

Looking forward to Moneyball sequel on how the Cleveland Indians built a team that won 22 straight but still lost to the Yankees in October.

If you break the AL winning streak you'll lose in 5. @Indians did you not see Moneyball? It almost won Jonah Hill an Oscar #MLBplayoffs

Now the Indians get a Moneyball movie right?

As soon as the @Indians were down to their final out, I thought of this… #ALDS #Yankees #Indianshttps://t.co/c7pS8kxtEl

This the part of Moneyball where Mark Ellis hits the home run but the A's still fall one run short.

Many of the other circumstances here are different, though. Yes, the Indians surprised the baseball world with their winning streak, but it wasn’t a surprise on the same level as the 2002 A’s. The A’s had just fallen in the ALDS, lost Jason Giambi, Johnny Damon, and Jason Isringhausen in free agency, and didn’t spend big in the offseason, part of what made Moneyball (and their streak, and their continued success that year and the following years) so interesting. The Indians made it all the way to Game Seven of the World Series last year, and while some thought they might fall off a little in 2017, they also made some nice additions like Edwin Encarnacion. So their streak was surprising, but not necessarily quite as unexpected.

And this shouldn’t necessarily turn into a lot of “going for streaks and regular-season records hurts teams in the playoffs” takes. For one thing, there isn’t much evidence for that (teams with better regular-season records win a lot of postseason games, as you’d expect), and for another, these games weren’t completely “meaningless” for the Indians. Yes, they were in good shape in their division even early on in the streak (the Minnesota Twins eventually finished second with a 85-77 mark, 17 games back), but the Houston Astros finished a game back (101-61) in terms of overall home-field advantage in the ALCS if it came to that. That’s not necessarily a huge deal, but it is incentive.

Beyond that, it’s better to win than lose, and suggesting that players shouldn’t try hard because they’ve won too many games in a row feels pretty silly. (Especially in a sport where your finances are determined by your individual statistics more than the team’s win-loss record.) And teams with better regular-season records do often win. But they often lose, too, and that’s partly because playoffs (especially the best-of-five division series matchups) are such a small sample size; that makes it much more probable that the improbable will happen, and there isn’t always a lot you can do about that. A’s GM Billy Beane famously noted that in Moneyball, saying “My shit doesn’t work in the playoffs“, and Will Brinson had a good thought along those lines Wednesday:

Remember when people would criticize Moneyball for not working in the playoffs? No, sometimes the postseason just kicks you in the nuts.

Abt got a pro sim-racer to compete for him and finished third (before getting DQ'ed) at the virtual Berlin E-Prix.

Abt got a pro sim-racer to compete for him and finished third (before getting DQ'ed) at the virtual Berlin E-Prix.